What Brave New Facts Are Falling From Ben Carson's Broken Brain Into His Mouthhole? 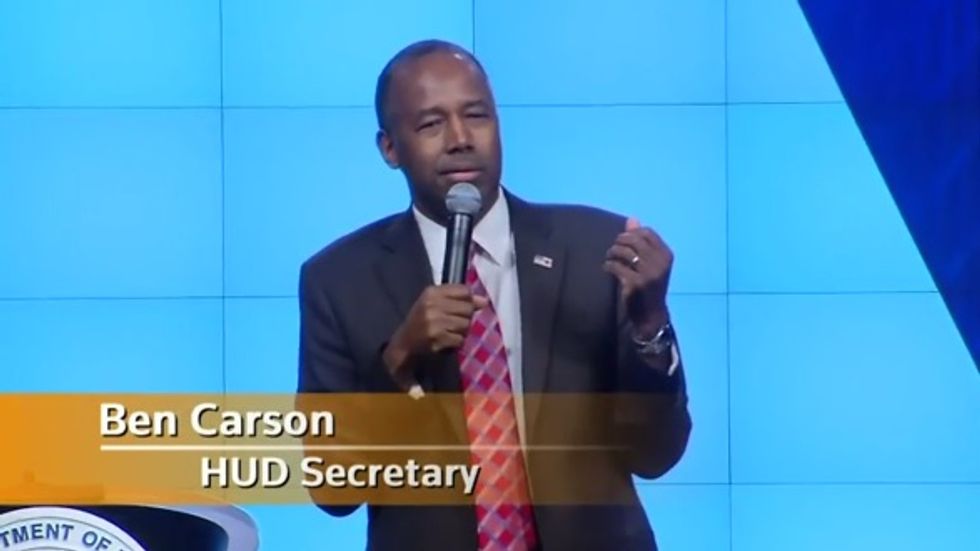 You have to give Ben Carson credit: He's the only person in the Trump administration, other than Little Big Hands himself, who could possibly manage to give a speech in which referring to slaves as "immigrants" brought to a "land of dreams and opportunity" would turn out to be only his second-craziest idea. But before we get to the inexplicable cray-cray, let's first go over the merely cray: In a Get-To-Know-You address to employees of the Department of Housing and Urban Development Monday, brand-new HUD secretary Carson let department employees know exactly how terrific America is for all immigrants, even the ones who had no choice in whether they left their homelands. After the usual Ellis Island stuff about plucky immigrants who sought a new life in a new land (which stopped being a good thing after about 1920), Carson explained,

“That's what America is about. A land of dreams and opportunity. There were other immigrants who came here in the bottom of slave ships, worked even longer, even harder for less,” said Carson, speaking extemporaneously as he paced the room with a microphone. “But they, too, had a dream that one day their sons, daughters, grandsons, granddaughters, great-grandsons, great-granddaughters might pursue prosperity and happiness in this land."

His comments were broadcast live to all of HUD’s regional field offices as well as to the public.

Nice to know there was a good audience for that inspirational vision of slaves' American Dream. Carson didn't mention some of the slaves' more short-term dreams, like maybe hoping they wouldn't be whipped, raped, sold away from their families (or have their families sold away), and the like. This is not because he closes his eyes to ugly realities; he's just a really positive guy.

WaPo reports that a "senior HUD official" later explained that everyone in the audience understood exactly how Carson meant what he said:

“He was making a point about people who came to this country for a better life for their kids,” the official said. “Nobody in that room put two and two together and came to five. Only the most cynical interpretation would conflate voluntary immigration to this country with involuntary servitude.”

Hmm... That senior HUD official wouldn't be "Ben Barron," perhaps? Maybe not -- according to several other attendees WaPo spoke to, the speech was generally well-received in the room, although reaction on social media was swift and mocking, with some people tweeting photos of rusty shackles and noting the immigrants had minimal carry-on luggage. And then there was Samuel L. Jackson, who made it clear he's had enough of those motherfucking snakes in Carson's motherfucking brain:

Carson, as usual, thought he'd done brilliantly and blamed The Media for making a big fuss over the remarks, explaining on Twitter that it's entirely possible to be an "involuntary immigrant," and that his larger point was that "Slaves didn't just give up and die, our ancestors made something of themselves," then later taking to Facebook to say he recognized that slaves and immigrants had "two entirely different experiences":

"Slaves were ripped from their families and their homes and forced against their will after being sold into slavery by slave traders," he wrote. "The Immigrants made the choice to come to America. They saw this country as a land of opportunity. In contrast, slaves were forced here against their will and lost all their opportunities. We continue to live with that legacy."

Be glad today's the last day of Black History Month. DeVos may not say anything crazy about race for a while.

OK, then! Maybe he needs to have lunch with Betsy DeVos so they can compare notes on segregation as a means of driving school choice. Everyone in the administration needs to try to be on the same page.

As we said, Carson's remarks on slavery were only the second most WTF moment in the speech; while stupid and offensive, they at least could be spun as ham-handed praise of the American Dream like you might expect from any unthinking wingnut. But later in the speech, the secretary veered off into the kind of pure unscientific baloney that could only come from the broken brain of Ben Carson. Who is, we should add, a neurosurgeon who's famous for separating conjoined twins connected at the head. But being a brain surgeon only means he knows how the brain is structured, not necessarily how it works, since he told his audience a bunch of inspirational but completely bogus bullpucky about what wonders the human brain is capable of, if only we'd access it! The brain, Carson claimed,

remembers everything you’ve ever seen. Everything you’ve ever heard. I could take the oldest person here, make a hole right here on the side of the head, and put some depth electrodes into their hippocampus and stimulate, and they would be able to recite back to you verbatim a book they read 60 years ago. It’s all there; it doesn’t go away. You just have to learn how to recall it. But that’s what your brain is capable of. It can process more than 2 million bits of information per second. You can’t overload it. Have you ever heard people say, “Don’t do all that, you’ll overload your brain.” You can’t overload the human brain. If you learned one new fact every second, it would take you more than 3 million years to challenge the capacity of your brain.

Err, no, not by a long shot, say actual neuroscientists, who know brains and memory a lot better than the famous surgeon:

“It’s utter nonsense,” emailed Dan Simons, a psychologist at the University of Illinois who specializes in attention and memory. “We can’t recall extended text verbatim unless we deliberately memorized it for that purpose (certainly not books we happened to read 60 years ago), you can’t trigger accurate recall of detailed memories with an electrode (and long-term memories aren’t stored in the hippocampus), we don’t store a perfect and permanent record of our experiences (it’s not all there just waiting to be probed), and you can’t just ‘learn how to recall it.'”

As Wired magazine points out, anyone who remembers their own imperfect memories already knows the brain isn't a computer drive that stores data with precision: We get things wrong, get memories mixed up, and as most couples who've told the same stories again and again can attest, can even forget whether a thing happened to us or someone close to us. While neuroscientists have some hot debates over how exactly memory works, and to what degree the brain "records and replays" or hazily reconstructs memories, there's broad agreement that you can't just zap a 50-year-old memory of a book back into existence (if memories worked that way, eyewitness testimony at trials would involve a hell of a lot more electrodes).

“To say that you could do that assumes that you know where you could actually find those memories, which we don’t know how to do,” Ramirez says. There are a lot of different kinds of memories—how to ride a bike versus your phone number versus where you were when you heard about 9/11—and while some of them hang out in a part of the brain called the hippocampus, the really permanent stuff seems not to rely on the hippocampus at all [...]

In a few cases, neurosurgeons have managed to get a patient to recall a memory by zapping the hippocampus with an electrode, but they can’t control it the way Carson suggests—if the memory of page 47 of Hamlet is even in there. “We’re barely able to activate fear or pleasure in an animal, let alone one among the constellation of memories that humans actually have,” Ramirez says.

Apparently this is one of Carson's favorite very wrong examples of what a wonderful mechanism the brain is; he's made similar comments in other speeches and in his campaign book, One Nation.

It's a thing he just knows, so don't go questioning him on it. It's every bit as true as his certainty that evolution is a lie invented by Satan, the pyramids were used for storing grain, and his decade-long paid endorsement of quack nutritional powders was not really a business relationship.

We're a bit terrified of how he'll bring his keen scientific insights to the field of housing policy. Perhaps he'll cite the Bible's promise that God will take care of everyone's needs as a reason for eliminating wasteful housing subsidies for poor people. After all, his mom was on welfare but was never dependent on government.

Wonkette is ad-free and supported only by lunatics like you.