What Happened To The 'Gays Cause Autism' Lady? Your Fringe Candidate Roundup! 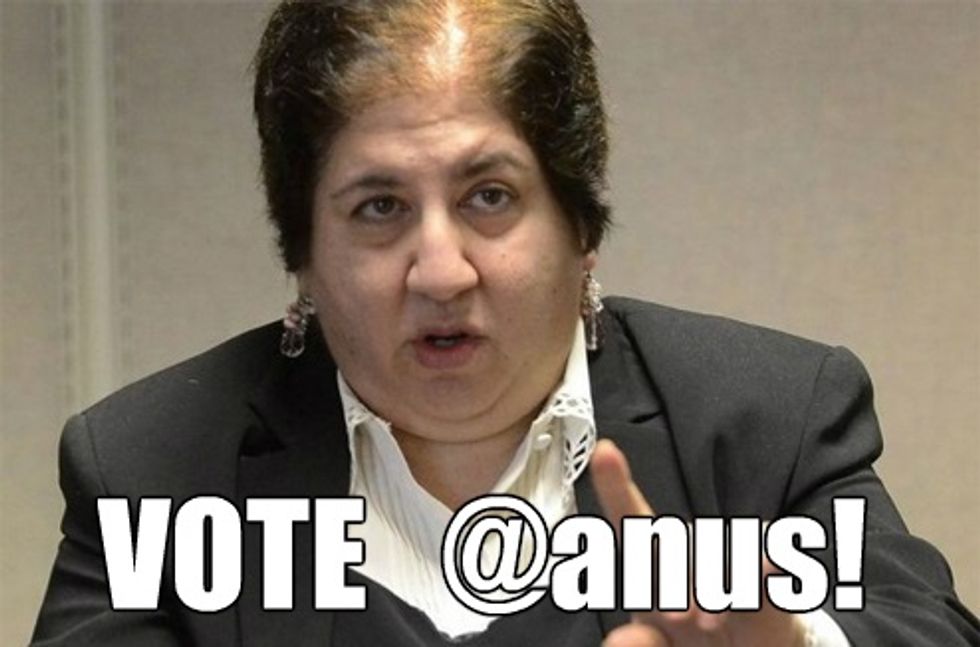 We know what you're thinking. "Did the bizarro Illinois lady who said that autism, dementia, and tornados are God's punishment for abortions and ghey marriage actually get elected to Congress?" This being the kind of election year that brought Joni Ernst and James Lankford to the Senate, you've got to ask yourselves: "Do I even want to know?" Well, do ya, punks? Let's just see what happened to some of the more... colorful candidates last week (mostly, the color is red with vein-bursting rage).

Happily, the answer to that first one is, no: Susanne Atanus, who was disowned by the Illinois GOP after her unlikely primary win (despite her repeated claims that that "God is angry" with America because we keep "provoking him with abortions and same-sex marriage and civil unions"), went on to get a house dropped on her in the general election. Incumbent Democrat Jan Schakowsky won in a veritable whirlwind of abortions and homos, getting a whopping 65.65 percent of the vote. We were unable to find any report of a concession speech, so we'll never know whether Atanus blamed her loss on teh gheys, or if maybe she realized that God just isn't that into her (we're guessing it's not the latter).

Another loser, we're happy to report, is drinky-drunky-drivey Minnesota Supreme Court candidate Michelle MacDonald, who neglected to tell the Minnesota GOP about a pending DUI charge before they endorsed her as the bestest Supreme Court lady who ever habeased a corpus.

She lost real hard to incumbent state Supreme Court Justice David Lillehaug, even though a jury found her not guilty of DUI back in September (voters may not have been all that impressed, because the same jury did convict her on resisting arrest and refusing a breathalyzer test in the 2013 incident). Too bad, so sad, Michelle MacDonald -- we guess Minnesota was just not ready for your special "Bible is better than Constitution" brand of justice. We have a sinking feeling that this is not the last we've heard of Michelle MacDonald, however. No one that energetically weird ever fades away quietly.

Not all of our rogue's gallery of candidates lost, alas. Remember the Michigan GOP's campaign flyer that urged people to call a Democratic candidate's dying mom to harass her about how much they hated Obamacare? While that vile little mailer was sent by the state party, the Republican candidate for that seat, Brandt Iden, didn't exactly repudiate it -- he merely said that his campaign wasn't behind it, because he wasn't into negative campaigning. In any case, Iden won that election in a 3-way race, getting 48 percent of the vote to Democrat John Fisher's 43 percent. After his win, Iden said that the mailer hadn't hurt him or helped him, because voters cared about the economy and blah blah blah. Remember kids, slime on your behalf is OK as long as you can deny you sent it yourself!

Back to happier news, New York Republican Kathy Weppner -- a birther, Orly Taitz enthusiast, and denouncer of "infected poors" coming across the border -- got whomped in her congressional race against incumbent Democrat Brian Higgins, about whom we know pretty much nothing except that he is not a paranoid birther loony. Still, she was able to make a name for herself during the Scary Guatemalan Children Panic of summer 2014, so perhaps she can try again sometime. Expect a major announcement from her about Ebola, maybe.

And finally, a fringe candidate who managed to get our attention not because she was a rightwing loonybird, but because she managed a primary election win a week before graduating from high school. Saira Blair of West Virginia was only 17 when she beat an incumbent in the Republican primary race for her West Virginia House district, and after turning 18 in July, she went on to win the general election last week, becoming the youngest elected state legislator in the country. So good on her. Then again, she's definitely a rightwing loonybird as well: She loves all the guns, wants to end all 'bortions and drug test everybody on welfare, and insists that the First Amendment only "guarantees freedom of religion, not freedom from religion," because our country was founded on "Christian-Judean principles." So we bet we'll be hearing plenty more from her. She seems nice.