What If Fox News Had Covered D-Day? 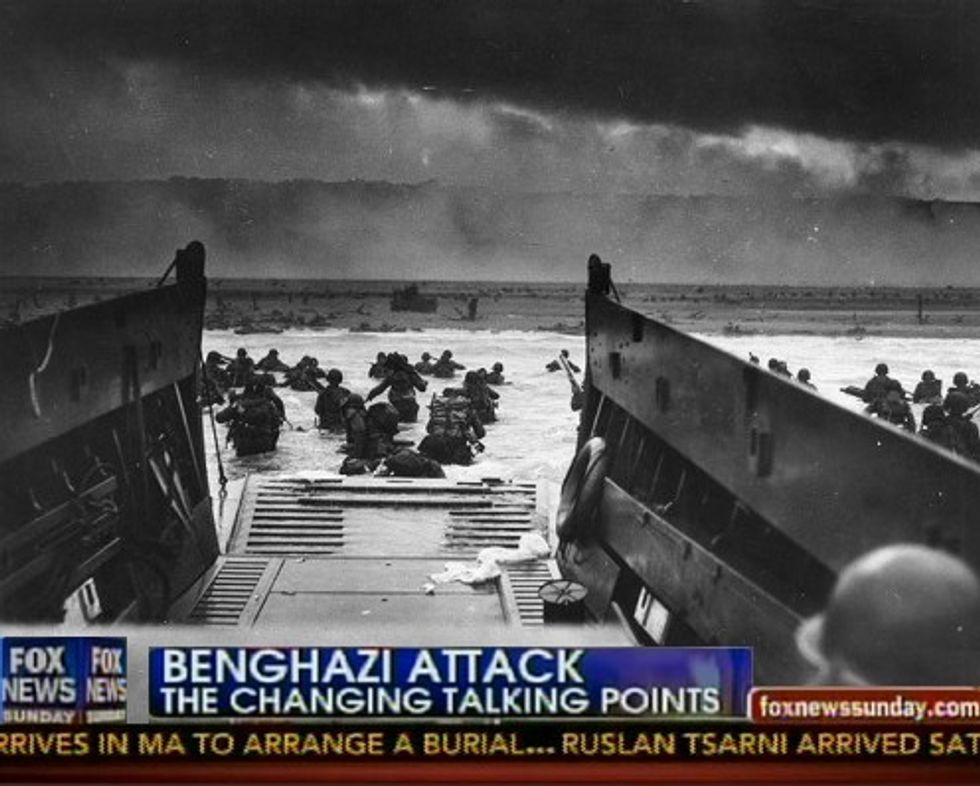 You guys, Fox News thinks that President Roosevelt screwed the pooch again. After yesterday's amphibious landings in Normandy, the network grudgingly agreed that Allied troops had established a beachhead in France, but they were really not happy with how Our Boys pulled it off, insisting that the casualties were unacceptably high, speculating that "Two-Wheeler Delano" picked such a dangerous location for the invasion so that it would fail, and blaming Roosevelt for the invasion's terrible planning, like the dropping of paratroopers dozens of miles off their target:

"How would President Roosevelt face the parents of these brave fighting men who parachuted into flooded fields and drowned?" asked Sean Hannity. "Are the grieving families supposed to simply accept 'cloud cover over the drop zone' or 'the planes were dodging flak' as an excuse?"

Hannity called for President Chairdaddy's resignation, asking "why does anyone still trust this president, after his demonstrated failures in protecting Pearl Harbor? Or the Philippines?"

Real American, Gen. George Patton, is being wasted on a diversionary operation back in England, the sort of pinhead scheme we've come to expect from this President.

On Fox & Friends, Steve Doocy and Brian Kilmeade traded innuendo-laden quips about rumors that First Lady Eleanor Roosevelt is a lesbian, and guest Dr. Keith Ablow, the worst psychiatrist in the world, attributed the shaky start of the invasion to the mental scars that polio left on the psyche of Ol' Gimpy What Rides In A Wheelchair Haw Haw Haw:

The President is a broken man. So it only makes sense that he'd have a broken plan. You'd never see Calvin Coolidge rushing into a European invasion without knowing where the paratroopers were going to land.

Fox commentators reserved some of their harshest mockery for Paratrooper John M. Steele of the 82nd Airborne, who spent much of the day hanging from his parachute's shroud lines after his 'chute snagged on a church roof in the occupied village of Ste-Mère-Église. Steele had played dead while German patrols passed beneath him, and was eventually captured by Nazi troops, although he later escaped and made his way back to American lines. Megyn Kelly said she was "disgusted" and "skeptical" of the recommendation that Steele be awarded the Bronze Star:

The Bronze Star is for valor. What kind of "valor" is there in playing dead and getting yourself captured? What information did Steele give up to his captors? Was President Roosevelt aware of Steele's cowardice?

On Facebook, Sarah Palin wrote "Any Grizzly Mama would have shot down some of those Germans, just like shootin' a moose."

Meanwhile, CNN covered the invasion with a brief 5-minute story and then returned to its ongoing coverage of the search for Amelia Earhart.