What Kind Of Free Speech Platform Won't Let You Tell People To Blow Up Buildings Full Of Jews? 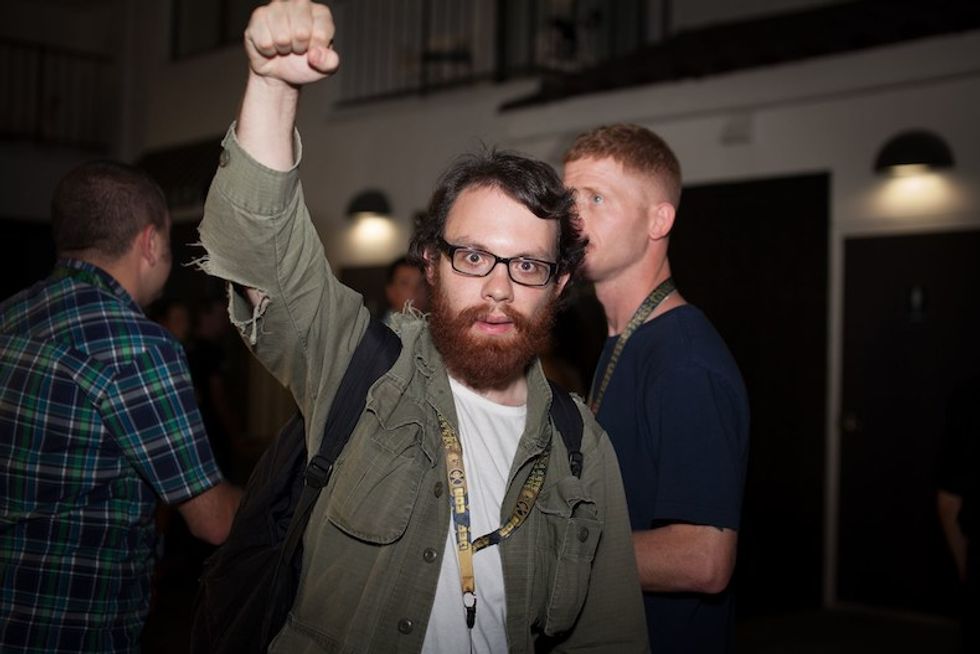 This weekend, white supremacist troll Andrew 'weev' Auernheimer got himself banned from Gab -- the preferred social media platform for the "alt-right" -- after posting a message in which he called for people to commit terrorist acts against Jewish people in the style of Timothy McVeigh.

In his post, Auernheimer credited McVeigh with the government revising tactics that had clearly gone very poorly in Waco and Ruby Ridge, which is not at all how things happened in real life. He suggested that the only recourse to prevent "Jews" from controlling the internet was, perhaps, to blow up a building like McVeigh did. You know, because surely, if someone were to blow up a building in the name of preventing "Jews" from controlling the internet, the world would quickly rally around the cause of giving trolls like weev more freedom to troll people on the internet.

The post, ironically, has led to weev getting less space to air his bullshit, not more.

The banning occurred at some point after fellow white supremacist Paul Ray Ramsey -- known as RAMZPAUL on social media -- screencapped the post in a tweet and tagged the FBI.

Auernheimer has since responded, with more anti-Semitism:

Following his posting and despite his removal, Gab soon received a letter from their domain registrar informing them that they would no longer be hosting their platform.

Auernheimer has since received support from many other alt-righters, who were truly not sure what was even wrong with suggesting that people commit terrorist acts against Jewish people, and believe it is unfair for him to be kicked off of Gab for the statement.

The tweet has since been deleted. This is all rather curious as both Cernovich and Stone have both recently started working for Infowars and have no previous beef that I'm aware of, and Pilosov and weev have been friends for years, with weev even using Pilosov's address as his when he registered The Daily Stormer.

Because this is all very complicated and I'm sure there are a few of you wondering who these people even are and what any of this even means, let me break it down for you.

Andrew 'weev' Auernheimer is a white supremacist, anti-Semite and hacker who has been trolling the internet since at least 2004, when, under the screenname "Memphis Two," he led a pre-Gamergate harassment campaign against games developer Kathy Sierra. Notably, he went to jail in 2011 for identity fraud and "conspiracy to access a computer without authorization" after he, as a member of hacker group Goatse Security, revealed to Gawker that AT&T had a security flaw allowing for the exposure of the email addresses of iPad users. Alex Pilosov, the guy Roger Stone told to fuck off, was with weev during his sentencing.

More recently, Auernheimer was the systems administrator for The Daily Stormer, which has since pretty much been kicked off the internet, and suggested people harass Heather Heyer's family at her funeral.

Gab is a social media platform designed, almost specifically, to create a safe space for far-right trolls who can't hack it on Twitter due to their obsessive need to harass strangers, particularly women and people of color. It hasn't actually become all that popular, on account of the fact that the people these trolls wish so desperately to harass are not there to be harassed. Which makes it kind of boring for them. But if, like Milo and (formerly) weev, you've been kicked off of Twitter, Gab is really your only option. Note that their logo bears a passing resemblance to Pepe the Frog, because of course it does.

The platform is the brainchild of the very childish Andrew Torba, who loves Trump and feels very passionately about being a mean person.

Gab's whole schtick has been that, unlike Facebook or Twitter, they LOVE 'free speech' and thus do no moderation and don't ban users for targeted harassment. As a result of this policy, Google has decided to ban them from the Google Play Store, meaning that you cannot download their app, from the Play Store, onto your Android. It has also been rejected numerous times by the Apple App Store.

Last Thursday, Gab filed a lawsuit against Google claiming that banning them from the Play Store violated federal antitrust laws. This weekend, following weev's Gab-tweet inciting terrorism, Gab received this notice from their domain registrar giving them five days to transfer their site and GTFO:

RAMZPAUL, aka Paul Ray Ramsey, is an internet white supremacist who notably relies on "satire" in his myriad YouTube videos to make his gross views more palatable to the viewing public.

A scathing critic of “cultural Marxism” — once an actual school of socialist thought but now a bogeyman to radical rightists who see it as a secret conspiracy to destroy Western society from within — Paul Ramsey is a white nationalist who posts Internet videos of himself talking to the camera under the screen name of Ramzpaul. Since 2009, he has uploaded hundreds of liberal-loathing, feminist-bashing, and racial separatist-supporting videos to his personal YouTube channel, typically at the rate of three a week. By 2014, his channel had close to 20,000 subscribers, and his videos were being frequently posted to unapologetically white supremacist websites like Vanguard News Network and Stormfront.

So, anyway, he thinks weev is a fake, and weev thinks he is a fake.

I guess it's hard to discern when everyone you are dealing with is an actual, professional troll.

What does it all mean???

It means, for one thing, that the alt-right is getting awfully splintery. At this point, it's nearly impossible to keep track of who hates whom -- I monitor these people pretty constantly, and I'm unable to do it. This is hardly surprising when you are talking about a movement largely made up of people whose only sincere interest is pissing off other people. Eventually, they turn on themselves.

For another, it means that Gab is learning not only the harsh lesson that free speech doesn't mean that anyone has to put up with your bullshit -- but also that if you create a platform specifically designed to provide a safe space for people to say horrible things... people are going to say horrible things. And some of those things are going to be calls to violence, which are not actually covered under "free speech" laws.

Wonkette is not hate speech. Wonkette would like your money please.