What To Wear To Your Late Summer Brawl: The Palin Family's Fashion Do's! 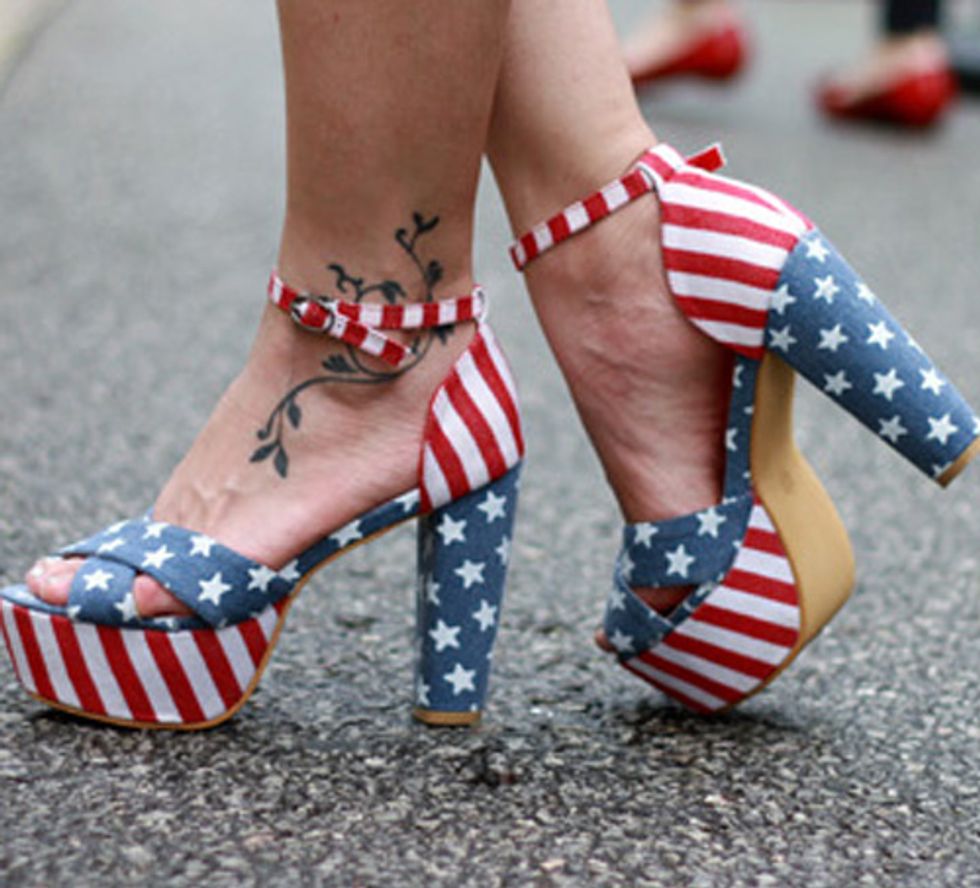 Late summer. The perfect time to crash a birthday party, punch the host in the face multiple times, and shriek obscenities at all and sundry. But WHAT TO WEAR? If you are Sarah Palin, the answer is"platform shoes with American flags on them." You guys, I think I just got hard. Let's glean more fashion tips from the Palin clan, along with the latest from witnesses on how the fight started, who punched whom and who choked someone out (Todd. Todd choked someone out), and the level of shirtlessness on certain Palin family eldest sons. It's not the first time the Palins have graced our fashion pages, but it might just be the best.

First: how to fight like a Palin, per Amanda Coyne.

[I]t started when Track confronted Willow’s former boyfriend, Conner Cleary, who was there with his father Steve and his mother Melissa. [... W]itnesses, who didn’t want to be named, say that Conner and Track fought on the front yard. Steve tried to break it up. Todd jumped into the mix and began to choke Steve.

After that ended, Conner, Steve, and Melissa Cleary huddled together close to [witness Eric] Thompson, who spotted Bristol and Willow from a distance, walking straight towards them with purpose.

“They were on a b-line, coming straight at Melissa,” Thompson said.

The owner of the house, Klingenmeyer, was trying to head them off at the pass. He approached them and told them to leave. Bristol, according to Thompson and other witnesses, planted her feet, “stood straight up, brought her arm back and cold-cocked him right in the face,” Thompson said.

And then she did it again, about six more times, before he pushed her away, and she fell, and Todd appeared.

“I was thoroughly amazed at the restraint Korey showed. He’s a total gentlemen,” Thompson said.

Another melee. This time Sarah got involved and began to scream profanities at everyone. One source, who didn’t want to be named, said that she was “nearly crawling on top of people,” trying to get into the scrum.

Oh hey, is that the same Eric Thompson who got fired for telling Good Morning America about Amurica's Classiest Fambly? We are guessing it likely is!

Now that you have your fighting tips -- choke, punch, scream, crawl, in that order -- let's move on to how to accessorize your mean right hook!

Thompson noticed two girls wearing sunglasses walking with an unusual amount of confidence around the yard. He only noticed them because of the sunglasses. That was odd, because it was at night. His wife told him it was Bristol and Willow Palin. “Does she think she’s Marilyn Monroe?” he said to his wife about Bristol.

Big sunglasses. Let's go with these.

Marilyn Monroe. Got it.

And how do you accessorize your screaming and scrum-clawing?

Palin wore platform high-tops with the American flag emblazoned on them.

Personally, we like the hooker shoes up top better. Then, of course, you always need a wig to snatch.

And if you are a man Palin, how do you fashion do? How about ripping your shirt off in a drunken and possibly meth rage?

That'll do, Palin family. That'll do.