Whatever Happened In Sweden, Donald Trump Pretty Sure They Had It Coming 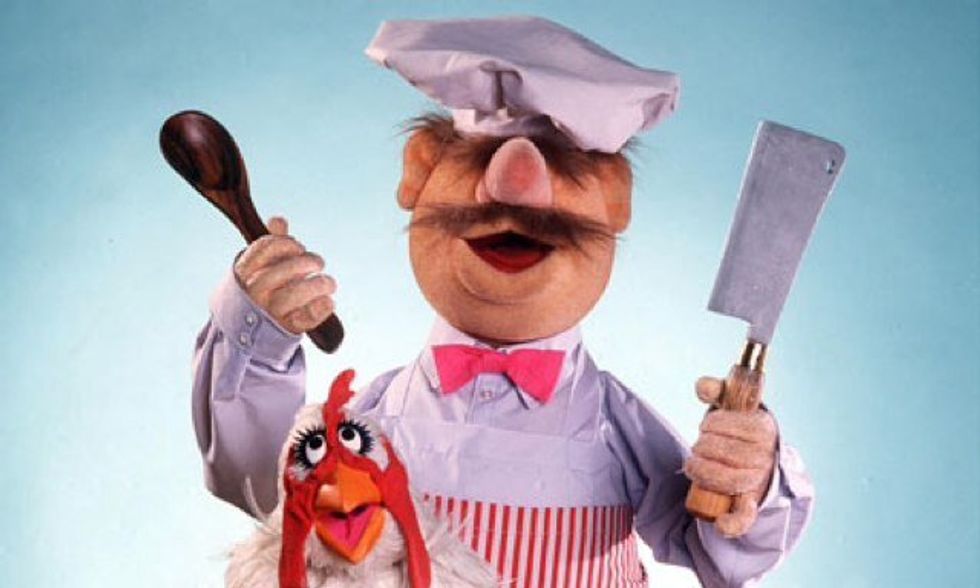 At his great big Nuremberg Rally Saturday in Florida, Donald Trump said he was shocked and horrified by something that happened in Sweden the night before. It was so awful! And it's all the immigrants' fault, because these people, they're just so terrible! Nobody in Sweden had any idea what Trump was talking about, but he got the crowd all worked up anyway, including Sweden in a list of countries where bad things have happened, and apparently referring to something awful that happened Friday:

This left the Swedes a little puzzled. The Swedish Foreign Ministry spokesperson told the A.P. Sunday it didn't know of any “terror-linked major incidents” Friday, and added the Swedish Embassy had asked the State Department what Trump was talking about. Unfortunately, apart from Secretary of Exxon Rex Tillerson, Trump hasn't actually appointed anyone to any jobs at the State Department, so nobody was picking up the phone.

Trump himself later clarified what he meant: What happened Friday night was that he watched a TV show on Fox News about Sweden and all the criming done by immigrants. He saw it Friday, so on Saturday, of course he talked about what's happening last night. What are you people, stupid?

He was probably referring to a Tucker Carlson interview with Ami Horowitz. The filmmaker has blamed refugees for a purported crime wave in Sweden and alleged that authorities are trying to cover up the incidents.

White House spokeswoman Sarah Huckabee Sanders, addressing the matter on Sunday, told reporters that Trump “was talking about rising crime and recent incidents in general and not referring to a specific incident.”

Nothing specific, which is why he said "what's happening in Sweden last night." Then everyone in the world went "Ohhhhh," and shook their heads sadly, because English works different for him. Also, Kid Zoom and I were really impressed by that movie Citizen Kane that Orson Welles made yesterday.

Still, people had a lot of fun wondering WTF the Leader of the Free World (except Chicago) was talking about. Former Swedish prime minister Carl Bildt wondered if perhaps the president was getting into the lingonberries again:

Incidentally, Trump also conflated the large numbers of immigrants who have crossed the Mediterranean seeking asylum in Europe for the last couple years with the very strict, orderly refugee screening process used by the USA, possibly because he has no earthly idea they're different:

This is actually a lie, and if Donald Trump doesn't know it's a lie by now, he's A Idiot.

As to the claim that Sweden is suffering from a huge crime wave because of refugees, yeah, that's Trump-hockey, too, according to Henrik Selin of the Swedish Institute, a government agency which promotes Sweden (so you know he's biased). Selin told the New York Times, "I do not have a clue what he was referring to," although he suspected it was news reports like the one on Fox claiming that Sweden is being ruined by scary Muslims:

Mr. Selin completed a study recently focusing on negative news reports about Sweden’s acceptance of refugees. It found numerous exaggerations and distortions, including false reports that Shariah law was predominant in parts of the country and that some immigrant-heavy neighborhoods were considered “no-go zones” by the police.

The nice folks at Dead Breitbart's Home for Frightened White Supremacists has run frequent stories claiming immigrants do little else than collect welfare and rape Nordic women, but Swedish officials say that's not actually the case, because of course they're complicit in the cover-up:

Swedish officials have said that their statistics do not justify such sweeping assertions, and that the country has a high number of sexual assault reports relative to other European countries because more victims come forward, not because there is more violence.

Mr. Selin said the news reports “were highly exaggerated and not based in facts,” adding, “Some of the stories were very popular to spread in social media by people who have the same kind of agenda -- that countries should not receive so many refugees.”

Oh, there has actually been some under-reported violence in Sweden recently, though it wasn't on Friday. The Independent reports that three neo-Nazis were arrested for bombing a refugee center in Gothenburg. So there's that, not that Trump would especially care.

Still, you have to hand it to the Swedes: they took to Twitter to show off what was really happening Friday night:

And the Swedish Embassy decided to consider the whole stupid thing a teachable moment:

Sweden's pretty cool, if you ask us. Maybe Lord Dampnut will take them up on the offer and learn something? Hahaha, we like to dream of nice things.