When One Senator Loves Two Other Senators Very Much: The Lindsey Graham Story 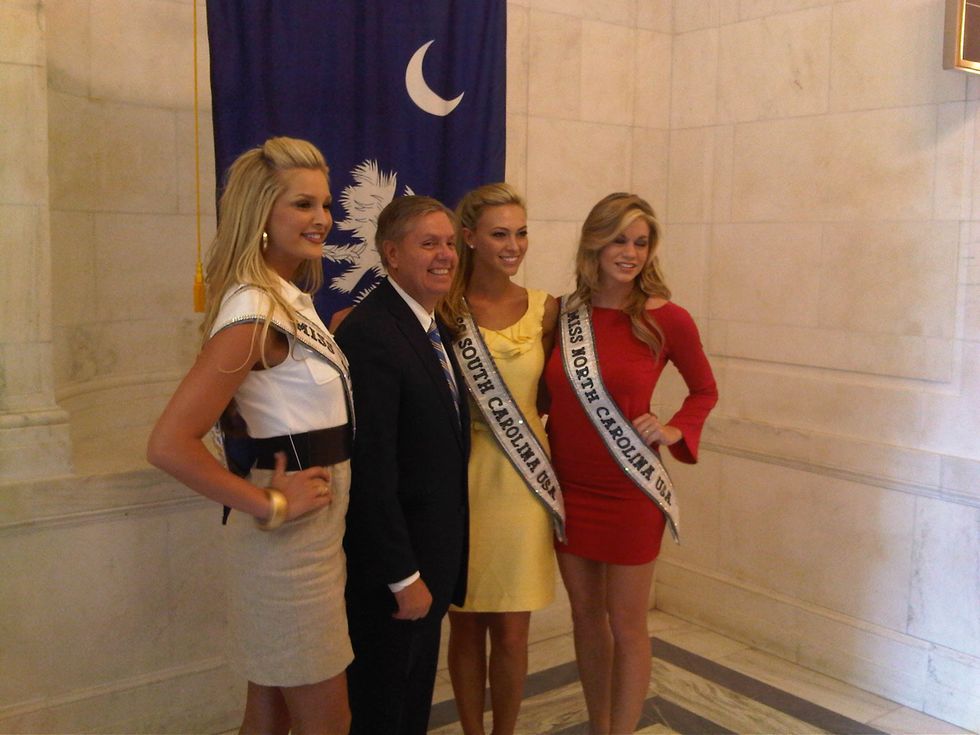 Guess what? It is a new day, so it is time to talk about Lindsey Graham again. We will get to write about this until the end of time, apparently. This poses a problem for yr Wonkette because there are only so many old-timey gay ads we can use in stories about him. Fortunately, there is no dearth of pictures of Lindsey Graham looking fetchingly butch so we're OK for a while. (Lowly not-editor's note: isn't that picture terrifying at that size???) The Senate's most macho closeted Southerner went on Piers Morgan last night to talk about gay marriage, along with grumpy old men (and unrequited love interests of Lindsey Graham) John McCain and Joe Lieberman, because why not? We've watched all painful five minutes of this Huey, Dewey and Louie show so you don't have to. Thank us later.

First Lindsey shares his thoughts about just how nice the gays can be:

You can be funny and charming and kind and be in love with someone of the same sex.

That is true! You can be funny and charming and kind and Southern and mildly old-man dapper and still be in love with someone of the same sex. Yes you can, Lindsey! Then things get a little weird and jesus-y and self-loathing though:

Oh Lindsey. After that we get some mumbo jumbo from Walnuts and Droopy about states rights, and then Lindsey gets to the heart of what he really wants:

Lindsey: If it is based on love, can three people love each other?

Lindsey: Well, is it possible for three people to genuinely love each other and want to share their lives together?

Morgan: Of course it is.

Whereupon Lindsey flung himself across both John McCain and Joe Lieberman singing "I've got two lovers, and I ain't ashamed/Two lovers and I love 'em both the same." OK, that part didn't really happen BUT IT COULD HAVE.

So gays are nice, three people can love each other...pretty much settled, amirite? Everyone should get gay marryin'. Not so fast, says Lindsey:

Yes! Genius Plan! Let's have another War Between the States, from which our national psyche will never really recover, and then after that we'll pass a gay marriage amendment handily! First comes Antietam, then gay marriage. Coastal elites and homosexuals (REDUNDANT) start sharpening your scythes because none of you blue-state people have guns.