Where Were You When Kim Davis Stood Up For Jesus At Columbine? 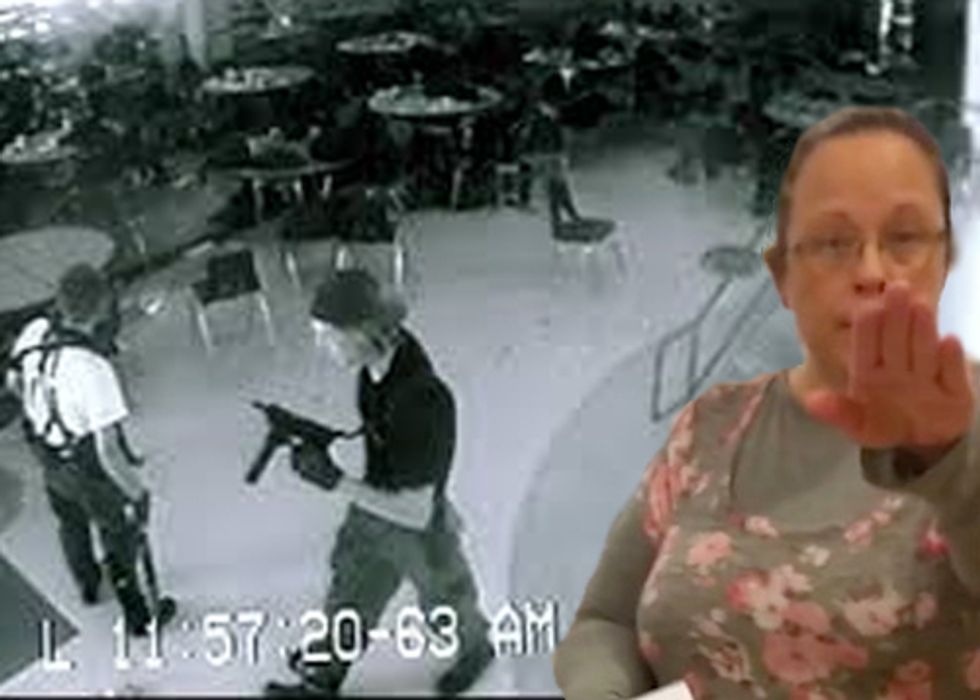 Oh, wait, you're just murderers, not gay? Well let me think this over. You're sure you're not gay?

The Republican debates had so many weird moments that it's hard to keep track of them all. Bobby Jindal explained that the arrest of a Muslim high school kid for building a clock was no big, because Christians are the biggest victims of discrimination in America. Jeb Bush forgot to Never Forget 9/11. And Mike Huckabee's wife is gonna be on the $10 bill, or maybe it'll be Donald Trump's daughter. But then there was Rick Santorum's attempt to explain how America has gone into the toilet since the good old days of the Columbine Massacre.

Santorum had a beautiful story memorized for the debate, contrasting a myth about the Columbine shootings and the supposed persecution of Kentucky court clerk Kim Davis, and by golly, he was chomping at the bit to get it out there:

Sixteen years ago this country was tremendously inspired by a young woman who faced a gunman in Columbine and was challenged about her faith and she refused to deny God. We saw her as a hero.

Today, someone who refuses to defy [sic] a judge’s unconstitutional verdict is ridiculed and criticized, chastised because she’s standing up and not denying her God and her faith. That is a huge difference in 16 years.

The myth, just in case you don't keep up with modern evangelical martyrdom stories, is that Columbine murderer Eric Harris heard 17-year-old Cassie Bernall praying as she hid under a cafeteria table, asked her if she really believed in God, and when she said "Yes," shot her dead. In reality, another student, Emily Wyant, who was hiding and praying with Bernall, had told both Cassie's parents and the Rocky Mountain News that Cassie never had a chance to say anything: Harris looked under the table, said "Peek-a-boo," and shot Cassie. The newspaper mistakenly attributed Cassie's supposed last words to the account of another girl who actually survived, Valeen Schnurr, who had been shot and wounded by the other killer, Dylan Klebold:

She was saying, “Oh, my God, oh, my God, don’t let me die,” and he asked her if she believed in God. She said yes; he asked why. “Because I believe and my parents brought me up that way,” she said. He reloaded, but didn’t shoot again. She crawled away.

Of course, the reality of who said what, and the non-fatal consequences of saying "Yes," wasn't corrected for five months, by which time the story of Cassie's martyrdom had become embedded in fundamentalist sermons and mythology, helped along by a book Cassie's mother wrote, titled She Said Yes: The Unlikely Martyrdom of Cassie Bernall -- which we can maybe forgive as an artifact of grief, inaccurate though it was. And obviously, that story captured the imagination of Rick Santorum, who has no such excuse, and used the myth to suggest that as a culture we're no longer willing to stand with a woman who's willing to face death for her faith.

Even if the Cassie Bernal myth were true (and it isn't), we should point out that Kim Davis is no martyr -- no matter how hard she and her fans insist that she is. For one thing, she's quite definitely alive, and no one is pointing a gun in her face. Nobody has asked her to deny God; she went to jail for refusing to follow a court order. We've been over this already. And as George Pataki pointed out before reminding us again that he was governor on 9/11, Kim Davis is not Martin Luther King. She's a county clerk who says she has the right to deny others their rights because Jebus told her she doesn't have to. Points to Pataki for calling out Santorum and asking, "We’re going to have a president who defies the Supreme Court?”

Santorum enthusiastically replied that we need more presidents to ignore the Supreme Court because, after all, "Judicial supremacy is not in the Constitution," and therefore everything since Marbury v. Madison is not really the law. Pataki wasn't finished with his Moment of Sense, though, adding:

There's a huge difference between a person standing up and saying, 'I will stand for my religious rights.' ...I applaud that, this is America -- you should be able to engage in your religious belief in the way you see fit. But when you're an elected official, and you take an oath of office to uphold the law -- all the laws -- you cannot pick and choose, or you no longer have a society that depends on the rule of law.