Which GOP Congressman Cussed Trump To Erick Erickson At The Safeway? A WONKVESTIGATION! 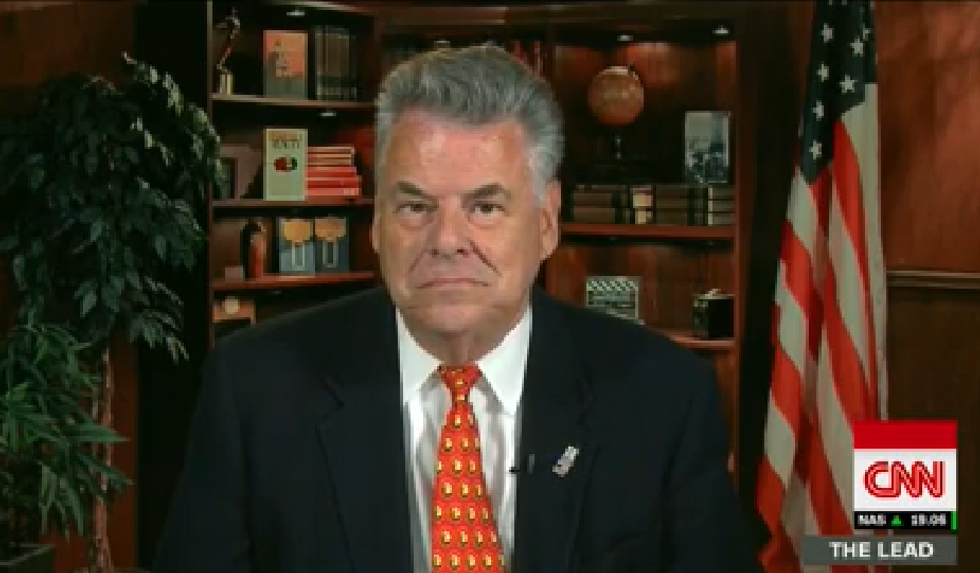 Have you read the HILARIOUS report posted by Erick Erickson over at his website "The Goat Romance" -- no shit, Erickson posted a funny! -- where a GOP congressman speaking on condition of anonymity goes off on a cussy potty rant, while talking to Erickson in the Safeway, presumably among the melons and the dairy products, about how much he hates Donald Trump but he can't say it in public? Here, a sampling:

...[D]ammit he's taking us all down with him. We are well and truly fucked in November. Kevin [McCarthy] is already circling like a green fly circling shit trying to take Paul's [Ryan] job because nobody thinks he's sticking around for Nancy [Pelosi]. [Ryan, in fact, is not! - Ed.] She's going to fuck up the cafeteria again too. [Jesus Christ], at least I'll probably lose too and won't have to put up with that shit. [...]

It's like Forrest Gump won the presidency, but an evil, really fucking stupid Forrest Gump. He can't help himself. He's just a fucking idiot who thinks he's winning when people are bitching about him. He really does see the world as ratings and attention. I hate Forrest Gump. [...]

Judiciary is stacked with a bunch of people who can win re-election so long as they don't piss off Trump voters in the primary. But if we get to summer and most of the primaries are over, they just might pull the trigger if the President fires Mueller. The shit will hit the fan if that happens and I'd vote to impeach him myself. Most of us would, I think. Hell, all the Democrats would and you only need a majority in the House. If we're going to lose because of him, we might as well impeach the motherfucker. Take him out with us and let Mike [Pence] take over. At least then we could sleep well at night.

So ... who the fuck said it? Let's look at the criteria for eliminating Republican members of Congress from the list!

HE REMEMBERS WHAT NANCY PELOSI DID TO CAFETERIA! While we were pretty sure for a minute this sounded like some shit-talking coming out of the beautiful mouth of that hot-ass GOP Illinois congressman Adam Kinzinger, he was elected in 2010, which means he wouldn't personally remember the horrors Pelosi visited upon the cafeteria when she was speaker, whatever they were (they were probably arugula horrors). So we'll eliminate anybody who wasn't in Congress before 2010.

THIS PERSON THINKS HE'S GOING TO LOSE IN NOVEMBER! And also is in a pretty Republican district, according to Erickson! So it's not one of the (many) Republicans retiring, and it's a fairly safe seat, but we guess it's close enough that dude thinks he could lose ... so that eliminates a lot of people. Like folks in districts Cook Political Report officially calls "competitive" at this point. Also, anybody in a Republican-held district won by Hillary Clinton.

THIS DUDE IS A MAN! At least Erickson seems to suggest so, by referring to the congressman as "he" a whole lot.

HE WOULD VOTE TO IMPEACH OVER THE RUSSIA STUFF! So it can't be Devin Nunes or Dana Rohrabacher (R-Kremlin) or any of the other ones who literally act like Russian intelligence assets.

HE DOES NOT LOVE THE PRESIDENT ALL THAT MUCH, BUT ISN'T A NEVER-TRUMPER EITHER. So this eliminates bottom feeding trash-stupids like Louie Gohmert and Jim Jordan, and people who were on the Trump transition team, etc. Likewise, it is not a Never Trumper or somebody who declined to endorse Trump during the campaign.

HE IS NOT KEVIN MCCARTHY. Because he talks shit about "Kevin," who is "circling like a green fly circling shit" to take Paul Ryan's job. (McCarthy LOOOOOVES Trump. It is not he.)

HE IS NOT ON JUDICIARY COMMITTEE. Congressman refers to Judiciary as "they," not "we."

HE GOES ON TV A LOT. Particularly goes on Fox News.

Without counting up their TV appearances, that leaves us with this list of 32 current GOP members of the House:

Yes, for sure, we could whittle that list down further by searching the Google to eliminate those on that list who have been slobbering in love with Donald Trump since the beginning, but that may not be necessary.

Did you see the one we put in bold print? Because that is who we think it is. Unless there's another person on that list besides Peter King of Long Island who you think is A) THAT CUSSY and B) on TV that much, constantly going back and forth between being supportive and also looking like maybe he might vomit at any given time. For what it's worth, NY-02, which King has represented for years, went 53-44 for Trump, so it falls squarely into the "he's scared he's going to lose but Erickson thinks he's safe" category. King endorsed Trump reluctantly and without "enthusiasm" when it became clear Trump had the momentum to win the nomination, so he fits that part of Erickson's description too.

And we can totally see King in the Safeway, bitching and moaning to Erick Erickson, who was obviously available because we imagine he's got a lot of free time for Safeway dates with Republican congressmen.

We are just asking!