Which Of Trump's Idiot Lawyers Is Leaking Like A Pee Diaper? NOT TY COBB! 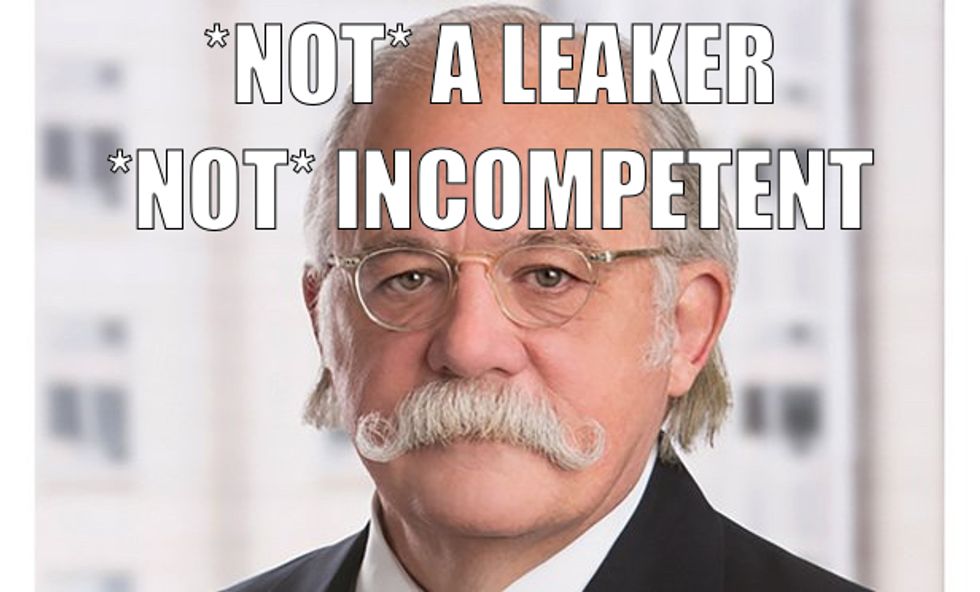 I wish you nothing but joy when his hairy testicles get caught up in your throat.

And he may be so dimwitted that he debated Trump's legal strategy over lunch 10 feet from a New York Times reporter.

Here's a photo of Ty Cobb & John Dowd casually & loudly discussing details of Russia investigation at @BLTSteakDC while I sat at next table. pic.twitter.com/RfX9JLJ0Te

But NFW that guy is dumb enough to leak to Politico that Donald Trump wants to sit down with Bob Mueller mano-a-mano to hash it out.

If Mueller doesn’t request an interview by Thanksgiving, Trump’s lawyers might even force the issue by volunteering Trump’s time, the official said. The White House believes such an interview could help Mueller wrap up the probe faster and dispel the cloud of suspicion over Trump.

“Whatever happens with regard to whether or not, or how, the special counsel might want to interview the president, there’s no reason to expect that would be combative,” the senior White House official explained.

Sure, Cobb has advocated a policy of radical honesty where the White House gives Mueller anything he wants. Because an innocent person has nothing to hide, right? Via NYTimes,

Mr. Cobb argues that the best strategy is to be as forthcoming as possible, even erring on the side of inclusion when it comes to producing documents, because he maintains the evidence will show Mr. Trump did nothing wrong. Mr. McGahn has told colleagues that he is concerned that Mr. Cobb’s liberal approach could limit any later assertion of executive privilege.

But he cannot possibly be stupid enough to have told Politico that President Sundowners Syndrome wants to Let's Hug It Out, Bitch with the Special Counsel and his League of Scaryass Lawyers. Yes, we know the old man said he was "100 percent" willing to testify. BUT HE WAS LYING! It's kind of his thing!

But have you noticed that Poppy's been a little off his game lately?

Also, too, even if your client weren't an unhinged lunatic, there might be one or two good reasons NOT to put him in a room with Robert Mueller.

Richard Ben-Veniste, a former Watergate prosecutor, said the risks for Trump are enormous and that Trump’s routine distortion of facts would make speaking to Mueller under oath highly dangerous. “Given his proclivity toward confabulation, I have no doubt his lawyers would counsel strongly against him testifying,” he said.

Sure, there's the "proclivity toward confabulation." Plus the bizarre tendency to tell the truth at inconvenient times.

It's a weird mix!

Besides which, who the hell does this leaker, WHO IS DEFINITELY NOT TY COBB, think is in charge of this investigation anyway? Bob Mueller will get to you when he's good and ready, asshole.

This isn't some real estate suit where you can just make shit up under oath. THESE ARE LAWYERS WITH GUNS.

After publication, the White House's head lawyer for the Russia investigation, John Dowd, insisted that the Politico story was,

You can tell Dowd is a fancy lawyer because he managed to keep his finger on the shift key for sixteen whole exclamation points! When asked whether he held Cobb down while Don McGahn punched him, or if the roles were reversed, Dowd had no comment.

Okay, you caught us. WE'RE THE LEAKER! So please put money in the till so we can continue to leak with reckless abandon!