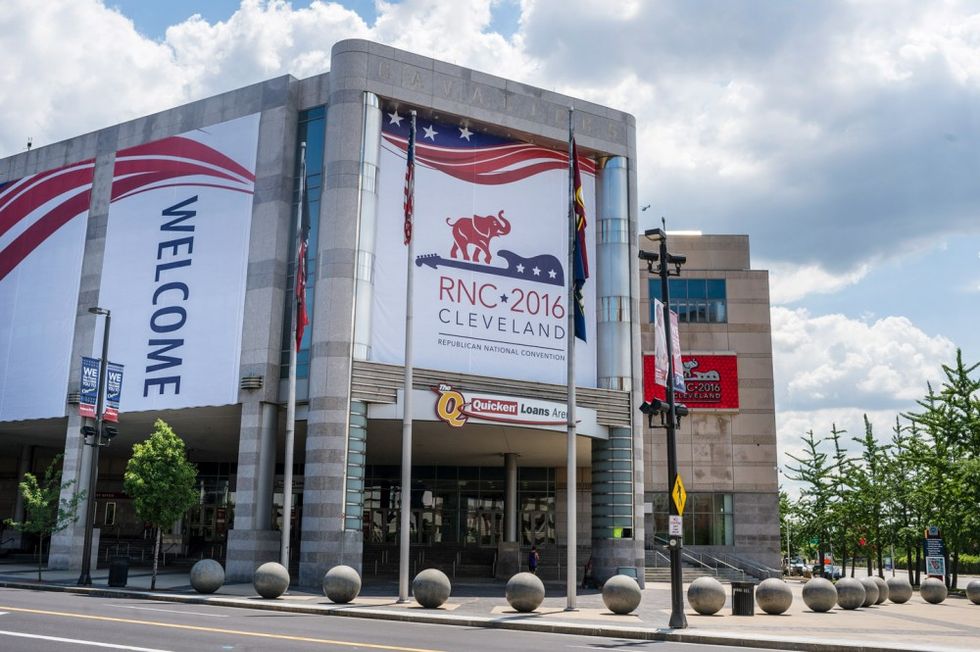 Oh for joy! It is the first day of the Republican National Convention, and boy are we excited! Today's theme is "Make America SAFE Again"! And naturally, this lineup consists primarily of people who have been on reality television at one point or another, plus some people who were in the military, and a few others who were contenders for Trump's Veep slot but lost to Mike Pence.

We shall now tell you about these speakers, and what they likely bring to the safety table.

Melania Trump -- Trump's wife, a former model, whom we imagine will be discussing catwalk safety, or something.

Lt. Gen. Michael Flynn -- Gen. Flynn was one of the people Trump was considering for VP, but apparently he didn't hate gays or women who have abortions enough or something. Also he thinks that a really good way to keep us safe is by pissing off other countries by not observing their customs when traveling to them.

Sen. Joni Ernst, R-Iowa -- Ernst will deliver a speech on how to not get kicked in the face by a hog during a castrating procedure. Of the seven women scheduled to speak tonight (out of 27 people), she is the only one who is there due to her own personal accomplishments and not those of a dude she is related to or married to. NICE!

Rep. Ryan Zinke, R-Mont -- Zinke, who is by the way NOT the secret father of the Wonkette babby, is a former Navy Seal who likes to refer to himself as "Commander" on his House web page. One time he ran for speaker of the House after having served only 10 months in Congress, mostly to get to email people to give him moneys. Perhaps he will be speaking on how to keep Americans safe from Nigerian Princes with similar schemes?

Willie Robertson of Duck Dynasty -- Let us hope that this means that Willie's dad Phil Robertson is, in fact, going to get to live his dream of being Trump's spiritual advisor! He will, we suppose, be talking about hunting safety and Jesus?

Scott Baio -- Scott Baio is used to keeping people safe, by being in charge of their days and their nights, and also their wrongs and their rights. Also he's a huge douchebag now. (Link to Scott Baio Has a Picture of a Black Guy in His Wallet is mandated by law every time we talk about Scott Baio.) OH, and he had a reality show called "Scott Baio is 45... And Single" in which he had to go around apologizing to women he was terrible to.

Antonio Sabato, Jr. -- When was the last time you even remembered that Antonio Sabato, Jr. had ever been a thing? I, personally, cannot recall. He was the star of "My Antonio," a reality show in which ladies competed to date him, as well as "Dancing With the Stars" and "Celebrity Circus" and "Celebrity Wife Swap" and "But Can They Sing?" OH! He is also the celebrity spokesperson for a thing called "AnastasiaDate." Which sadly is not a dating service for Romanov impostors, but more of a mail-order bride kind of thing.

Sean Duffy -- As a former "Real World Boston" cast member, one could say that Duffy really paved the way for reality stars looking to get into politics. He shall teach you how to keep safe when people stop being polite and start getting real.

Rachel Campos-Duffy -- Also a former Real World cast member, whom you will recall was the worst and also made out with Puck. Ew. I don't know, maybe she will talk about how it is unsafe to stick your dirty hands in someone else's peanut butter?

Rudy Giuliani -- Apparently no former Jersey Shore cast members were able to speak, so they got this dude. Will likely discuss how to keep the country safe by being as horrible to homeless people as humanly possible.

Sen. Jeff Sessions, R-Ala -- Sessions was considered a contender for the VP slot, but now he isn't even a headliner. SAD!

I am actually a little disappointed. They couldn't get a single Kardashian? Or even a Real Housewife? What about that God Warrior lady from "Trading Spouses?" I bet she would have been into it!

Or Duggars! HOW ARE THERE NO DUGGARS?

ANYHOO! All the fun starts at 8PM (ET) and you can join yr Wonkette here for... well, something. We haven't decided yet! But it will be good and fun and you will like it!