White Guy Who Planned Mosque Attack Not Charged With Terrorism. Wonder Why! 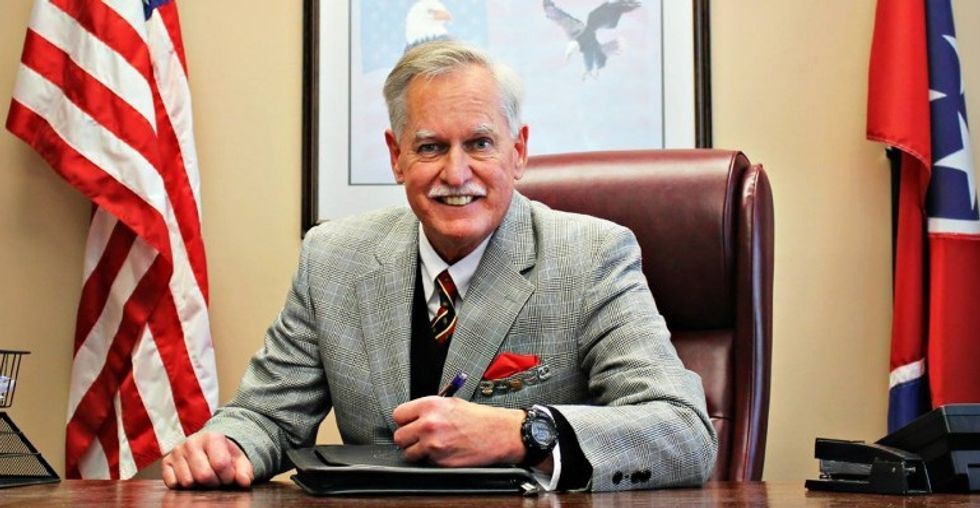 Take a moment and imagine the following scenario: A Muslim man is arrested after it is discovered that he had planned to burn down a Christian church and discussed these plans with an FBI informant. Authorities also reveal that he had spent time on Islamic fundamentalist websites talking about how Christians must be taken down with AR-15s.

In this scenario, what sort of crime do you think he would be charged with? I know, it's real tough, so feel free to take a moment and think about it real hard.

Back in 2015, Robert Doggart -- a 65-year-old man who once ran, unsuccessfully, for Congress -- was arrested for planning to attack a mosque in upstate New York, and trying to recruit people to help him burn it down. He was caught after meeting with an FBI informant, with whom he discussed his plans to obtain and make weapons in order to carry out the assault. It was also discovered that he went on right-wing extremist sites and talked rather openly about his desire to attack the Muslims living in "Islamberg," a predominantly Muslim community near Hancock, New York -- on account of the fact that he was pretty sure it was a terrorism training camp.

But he is not being charged with anything related to terrorism. Despite the fact that he is, allegedly, an attempted terrorist.

According to the U.S. National Counterterrorism Center, terrorism is an act that is "premeditated; perpetrated by a sub-national or clandestine agent; politically motivated, potentially including religious, philosophical, or culturally symbolic motivations; violent; and perpetrated against a non-combatant target."

Perpetrated by someone not on behalf of a government? Check!

Perpetrated against a non-combatant target? Check!

What Doggart was attempting to do was terrorism. Just like it's terrorism if someone blows up a Planned Parenthood because they hate abortion, bomb a lab if they want to stop animal testing, if they kidnap Pattie Hearst, or, you know, blow up a giant building in Oklahoma City.

However, the attorneys representing the people of Islamberg in a separate civil suit against Doggart say that the way the law is worded makes it almost impossible to charge domestic terrorists with terrorism.

"There's a gap in the law," attorney Tahirah Amatul-Wadud told the Daily News on Monday evening. "Frankly, there is nothing on terrorism unless it's connected to a foreign element. You won't see the KKK charged with domestic terror even though that's what they do."

According to the Patriot Act from 2001, prosecutors can only charge a defendant with domestic terrorism if he or she had the intension to "intimidate" or "coerce" a civilian population, or influence the "policy of a government" to affect the conduct of government by "mass destruction, assassination, or kidnapping."

Of course, this still does seem like what Doggart was doing. Clearly, he was trying to intimidate the citizens of Islamberg, as well as Muslims across the country. He was trying to send a message: it is not safe for you here.

Recently, the Trump administration decided that the government's "Countering Violent Extremism" program would now only focus on "Islamic Extremism." You know, because it's not like we have a problem with non-domestic terrorism or anything. Except for the fact that the Southern Poverty Law Center notes there has been an unprecedented rise in hate groups over the last year. Or unless you ask people who actually study counterterrorism and say that right-wing violence is a very serious problem.

Not declaring actions like Doggart's to be terrorism is almost an implicit endorsement of those actions. It's like saying "Sure, they're bad -- but they're not like, Radical Islamic Terrorism bad." It allows people who commit acts of right-wing terrorism to still feel that they are somehow better than those who commit acts of terrorism related to Islam. And that is some serious bullshit that will put people's lives in danger.

Not to mention that it's racist af.

Did you hear that? That was the sound of no ads on Wonkette. Help us keep it that way here.