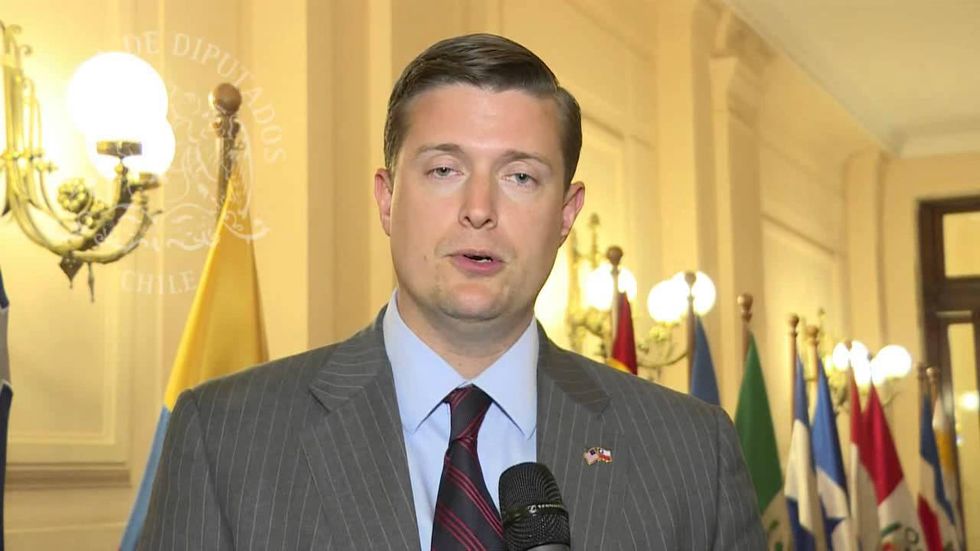 In the last week, Trump White House staff secretary Rob Porter's first and second wives have come forward with horrific stories -- and pictures -- detailing how he physically and psychologically abused them when they were married. Today, Porter resigned from his post, while claiming he is innocent and that his ex-wives are part of a "smear campaign" against him.

According to Porter's first wife, Colbie Holderness, he first got abusive on their honeymoon and things escalated from there:

Holderness said: ‘It was a really odd thing that he did. He was angry because we weren’t having sex when he wanted to have sex and he kicked me. It seems such a juvenile thing at the time, but I remember thinking about words my mother had told me when it happened.

'She had passed away before I graduated from college. She told me that she had once warned my father that if he ever hit her, she would leave him. My father never did anything like that because he’s a very good man – but I remember those words passing through my head right after Rob kicked me. I was thinking, “What do I do? I just got married.”

‘It was a kick which, although it hurt, was ridiculous at the same time. That was the first time he hurt me and then the doors opened. I didn’t do anything and it continued.’

Holderness also provided pictures of what she looked like after Porter beat her on a vacation they took to Florence:

Jennifer Willoughby, Porter's second wife, spoke about how he had physically pulled her from the shower:

Willoughby said : ‘[It happened] just after our first anniversary. I cannot remember what the fight was about but I excused myself in a way that was typical at that time. I certainly was not meek and mild and said, ”I’m not going to fight you anymore” and stormed off and went to take a shower.

‘He was not done fighting with me. It was a glass shower door, he opened it and dragged me by my shoulders out of the shower to yell. Immediately upon seeing my reaction to that, he released me and apologized but it doesn’t take away that he was angry enough that that happened.’

Both women said that, in addition to the physical assaults, Porter was also extremely psychologically and verbally abusive.

There's really not any possible case to be made that these women are just coming out of the woodwork now in order to make the Trump administration look bad. Willoughby had a protective order against him in 2010. The FBI interviewed both Holderness and Willoughby when Porter was tapped for his White House position, and were shown the pictures of Holderness's black eye. These things have been known for a while now. and unless these women are also time-travelers, they are not part of any "smear campaign."

When asked about the accusations earlier this week, the White House was eager to defend Porter:

When reached for comment, Porter told DailyMail.com: 'I will not comment about these matters, beyond stating that many of these allegations are slanderous and simply false.'

John Kelly, Chief of Staff, commented: 'Rob Porter is a man of true integrity and honor, and I can't say enough good things about him. He is a friend, a confidante and a trusted professional. I am proud to serve alongside him.'

'I have worked directly with Rob Porter nearly every day for the last year and the person I know is someone of the highest integrity and exemplary character,' Press Secretary Sarah Sanders told DailyMail.com.

'Those of us who have the privilege of knowing him are better people because of it.'

In today's press briefing, Sarah Huckabee Sanders refused to comment on whether or not Porter had received security clearance after the FBI had spoken to Holderness and Willoughby, and refused to comment on the situation beyond giving Porter's statement about how he's only resigning because he puts his country before himself, and how his ex-wives are both liars who are out to get him. She also noted that his resignation was not asked for, implying that the White House is either totally fine with his actions, or does not believe the accusations against him.

What a message that sends to women who have survived monsters like Porter, huh? You, too, may someday live to see the man who punched you in the face get a job in the White House and then be praised for his fabulous integrity!

Porter has reportedly been dating 29-year-old White House Communications Director Hope Hicks. Porter's ex-wives' allegations were not previously unknown to the White House. We don't know if Hicks knew, specifically, but others clearly did. Did no one, not her "friend" Ivanka, not Sarah Huckabee Sanders, pull her aside and say "Hey, Hope, we're gonna defend this guy publicly if this comes out, but maybe you should not date him because it's pretty clear he has some issues with women?"

This makes it even more clear that this White House does not care about women, not only in the general sense, but also in the individual sense. They would have ignored Rob Porter's ex-wives if he had chosen to stay, and they -- very clearly -- didn't give a crap about Hope Hicks' personal safety either.

Wonkette salaries and servers are fully funded by YOU! Click here to fully fund Wonkette!