White House: No No No, Trump Was Defending The *Rapist* Not The *Wife-Beater*! 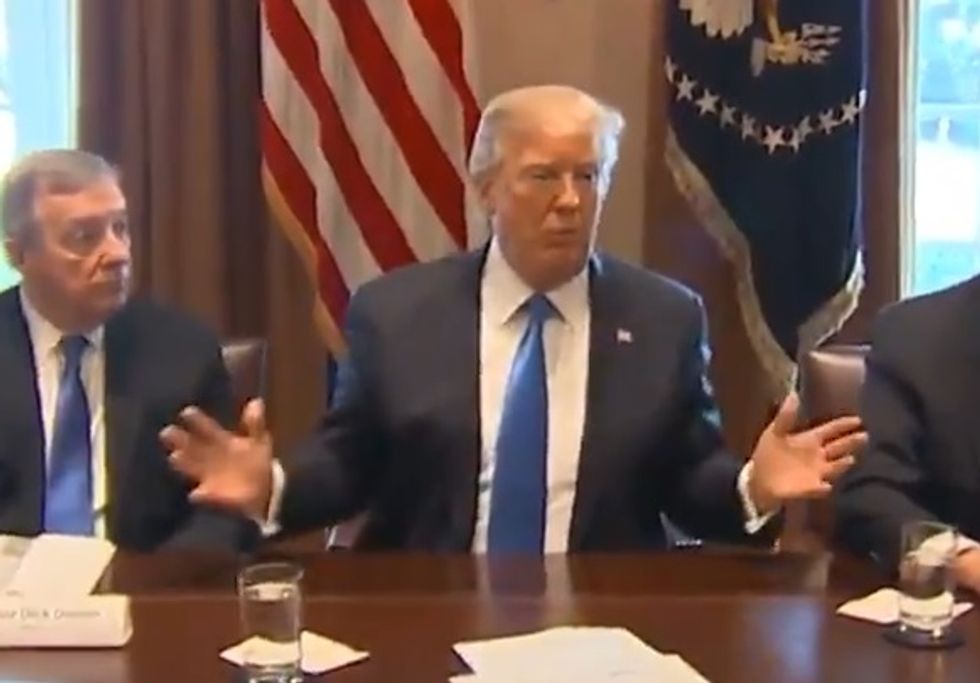 The media has finally found a Trump scandal that can outlast the 12-hour news firehose, and it is "when did you stop beating your wife." Did you think the Rob Porter mess would still be a thing even a day later? Let alone five? Me either! But it is easier to hold focus on something unsullied by any boring "policy," especially when the president of the United States of America does things like"defend the guy who beat two of his wives." Let's go in the wayback machine, to the mists of time of "Saturday"!

Other reporting suggests that in private, Donald Trump thinks Rob Porter is a real asshole who should not beat women. AND YET! Donald Trump still can't say so in public. (See above.)

So what bullshit did the White House throw at the Sunday shows? It was "nah man, Trump wasn't defending Rob Porter. He was defending the rapist."

[Chris] Wallace pressed Mulvaney, noting that even after Porter resigned, Trump “still has not said anything about zero-tolerance. He still hasn’t mentioned that the lives of the two women who were the subjects of abuse, that those lives have been shattered too.”

Mulvaney responded that Trump’s tweet “can be applied to a bunch of different people. When I saw the tweet, I had wondered if he was talking about his friend Steve Wynn.

STEVE WYNN? The alleged rapist who terrified dozens of female employees? The guy who raised millions as finance chair of the Republican National Committee, and whose personal gifts of $375,000 in sticky money the RNC decided it would KEEP?

Ten bucks he figures out a way to blame both stories on Hillary.

Oh, Mick Mulvaney, you aren't supposed to mention him. Otherwise, Chris Cillizza might remember that he left the alleged rapist off the hook while everyone went after Hillary Clinton for not firing the guy who rubbed a lady's shoulders, when both stories broke the same day. Just kidding, Chris Cillizza will never remember that.

You know who's not stupid enough to bring up the (alleged) rapist whose money the RNC just can't quit? Kellyanne Conway, that is who. That lady ain't dumb! Instead, she is just going to snow-blind you, with a blizzard of WORDS!

And then he talks about mere allegations, people being falsely accused. So let me ask you again, does the president believe that Rob Porter is falsely accused?

CONWAY: The president believes, as he said the other day, you have to consider all sides. He has said this in the past about incidents that relate to him as well. At the same time, you have to look at the results. The result is that Rob Porter is no longer the staff secretary. It is — it is — the president tells me that he learned just this week, when the rest of us did, what these allegations are, what — these pictures, the contemporaneous, police reports, the detailed information as having been provided to the FBI. …

Does anybody know what Kellyanne Conway just said? She sure didn't bring up THE RAPIST. Except that ... she brought up TRUMP. Know who's been accused of rape? By his OWN WIFE, UNDER OATH (among others)?

Anyway, as of five days later, the president of the United States has wished well the wife-beater, and MAYBE the rapist, and definitely himself, for whom he has much compassion, and not any of the women, if you were keeping count, the end.

Wonkette: yelling at wife beaters and rapists and presidents of the United States, FOR YOU. Please give us money.