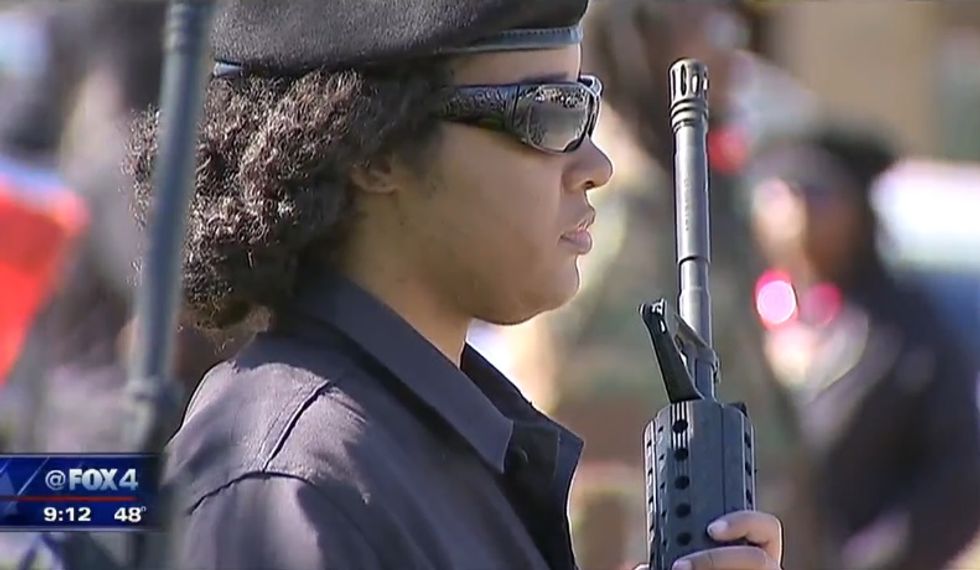 Everyone gets an AR-15

Back in November we told you about the brave Real Americans with Guns who kept Texas from being overrun by Sharia Law through the simple act of hanging around outside a mosque, holding guns, so that nobody in the mosque got up to any America-taking-over mischief. The armed idiots, who call their group the "Bureau of American Islamic Relations" (a very clever play on the Council on American Islamic Relations), insisted their goal in carrying semiautomatic rifles and "tactical shotguns" wasn't intimidation, but self-protection. Which is no doubt why several of them wore masks, too, so their identity wouldn't be given away to the ISIS infiltrators who are all over Texas suburbs. On Saturday, the group held another of its carry-guns-at a mosque events, only this time, since they'd chosen to protest outside a Nation of Islam mosque in South Dallas, the dozen or so masked idiots were met by several hundred black counter-protesters, most of them also armed. After standing around holding their guns and flags and looking stupid for a while, the brave men of BAIR took off, and as they say, the protest "ended without incident." Here are the brave patriots, some with their faces obscured by skeleton masks to confuse The Enemy:

In a now-removed Facebook post, the BAIR baiters explained they simply had to protest the mosque for "promoting violence against Americans openly and publicly," although if they listed any examples of specific threats the Nation of Islam mosque had made, the Dallas Morning News didn't see any before the Facebook invitation vanished. Still, the good old boys offered some fine old rightwing fearmongering:

We cannot stand by while all these different Anti American, Arab radical Islamists team up with Nation of Islam/Black Panthers and White anti American Anarchist groups, joining together in the goal of destroying our Country and killing innocent people to gain Dominance through fear!

Police kept the two groups apart, and soon the BAIR protesters made a strategic retreat, perfectly satisfied, no doubt, that they'd proven to the scary blacks who greatly outnumbered them that they would not be Dominated by fear. (Whether they will ever master simple capitalization rules for Standard English remains to be Seen). After the protesters withdrew, the crowd broke into chants of "black power!" and no doubt had a good laugh about the likely stains in the tighty whities of the whitey righties.

Balogun, who helped organized the counterprotest, added that he wasn’t “surprised” the group withdrew when confronted by the emotional crowd.

“Would you come out and face them?”

Happily, nobody decided that Saturday was the perfect day to start a race war, so instead we were treated only to the spectacle of two opposing groups of Americans exercising their Second Amendment rights, carrying military-style weapons and dressed in paramilitary garb. You'd think that with so much in common -- love of guns and dressing like pretend soldiers -- the opposing militias would get along better in the great big brotherhood of armed loons. Maybe next time they should try sharing a Coke and teaching the world to sing in perfect harmony.