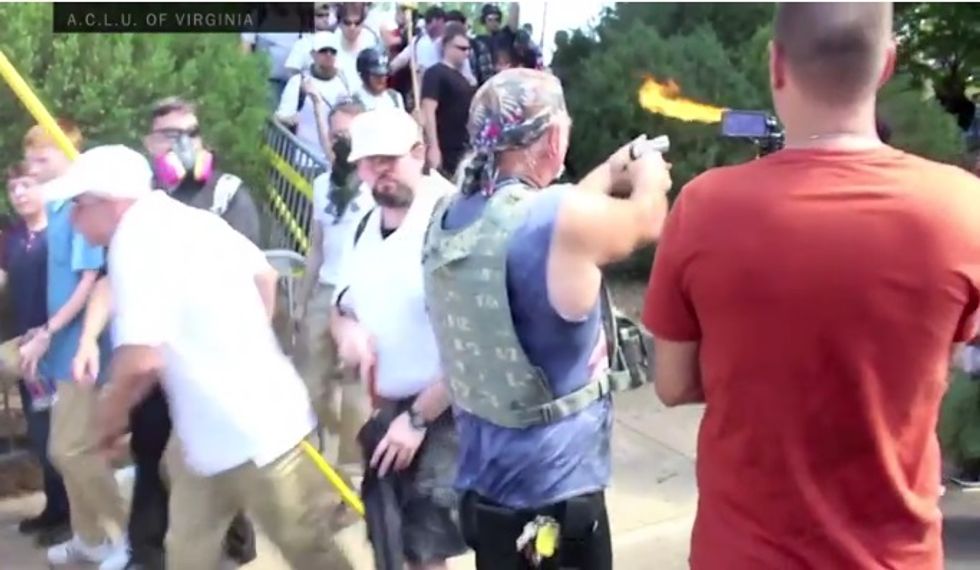 It took two weeks, but police have finally arrested a Ku Klux Klan idiot who fired a gun at a counter-protester in Charlottesville, and have also arrested one of the men who beat another counter-protester in a parking garage. Both violent incidents happened near police, who did a fine job of standing by and doing nothing.

In the video up top, Richard W. Preston, the "Imperial wizard" of a KKK group, can be seen shouting "Hey, nigger!" and pointing a gun at counter-protester Corey Long, then racking the pistol and firing a shot at Long's feet. Despite the shot, Preston was able to walk away right in front of a dozen or so state troopers about 10 feet away from him. Police said they hadn't heard the gunshot, which seems just slightly improbable, considering it was a gunshot and all. Long told The Root he was using a lighter and spray can a protester had thrown at him as an improvised flamethrower to fend off a white supremacist marcher who was trying to spear him and an elderly white counter-protester with a Confederate flag.

Another arrest was made in a related act of violence; Daniel Borden, 18, was arrested in Cincinnati as one of the six men who used pipes and pieces of wood to beat 20-year-old DeAndre Harris, a teacher's aide and a friend of Long's, after cornering Harris in a parking garage that was -- surprise -- near Charlottesville Police HQ. This Twitter photo of the beating went viral:

“For DeAndre and his family, news of the arrest of one of the six men that assaulted him comes five suspects short and 14 days too late,” Mr. Merritt said Saturday. “Given that these men were identified by a journalist almost immediately, it appears that law enforcement sat on its hands for a couple of weeks before deciding they probably should arrest someone.”

Harris's attorney, S. Lee Merritt, told the New York Times that Harris had suffered a broken wrist and a head injury requiring 10 staples to close. Borden was charged with felony "malicious wounding" in the attack, and could face one to five years in prison if convicted. Police have also charged Alex Michael Ramos, 33, with malicious wounding, but he remains at large. Police released a wanted poster of Ramos, who's from Marietta, Georgia:

Now, don't go worrying that Mr. Ramos is any sort of white supremacist, because he explained all about it on the Facebook:

According to Mr. Merritt, Mr. Ramos’s friends identified him after he posted about the attack on Facebook, saying that as a Puerto Rican man he disavowed white supremacy but participated in the rally because he despises leftists. In the video, Mr. Ramos appeared to have something wrapped in his hands that he used to strike Mr. Harris, Mr. Merritt said.

The attack on Harris occurred a few hours after Long's standoff with the Confederate flag-wielding dude and the shooting incident. According to Merritt, the attorney, a white demonstrator tried to impale Long with another flagpole, and Harris shoved the flagpole away, after which over a dozen protesters rushed him. So now we know why the Confederate flag has to be protected -- it's not about heritage or hate, it's just a really useful weapon when it's attached to a metal pole.

Long told The Root about the attack on Harris:

“The white supremacists told us to ‘die, nigger’ in the garage,” Long said. And when one had the chance, he picked up a stick and tried to use it to his advantage.

Even when Long was finally able to help Harris and get him to safety, the white supremacists were unrelenting. Harris and Long ran into a stairway, and they were chased there by the racists as well.

“The Nazis tried to force their way into the stairway that we were hiding in. The fact was that they [photographers] just stood around recording everything. The fact that they didn’t help us. ... It was outrageous,” Long stated.

Long also said the police didn't seem the least bit interested in keeping the people of Charlottesville safe from the far-right protesters:

But don't worry -- the New York Times reports Charlottesville is totally on this now: it's hired a former U.S. attorney to evaluate the city's planning for and response to the rally, as well as two other marches by white supremacists in the city earlier this year. We'll go out on a limb and suggest the report will recommend against cops standing around and letting Nazis beat on people. But we may be optimistic there.

Yr Wonkette is supported by reader donations. Please click the "Donate" clicky, and we'd be ever so grateful if you could not poke us with a flagpole