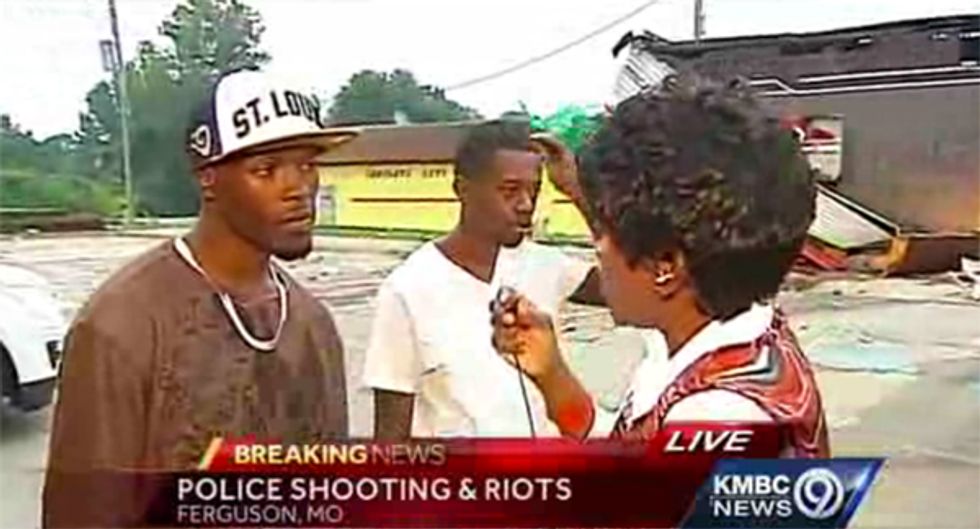 Get ready for another thoughtful National Conversation On Race, which will go something like this: Person A: "A cop shot 18-year-old Michael Brown to death, although Brown wasn't armed. I don't buy the story that Brown just attacked as the cop was trying to get out of his car." Person B: "Yeah, but the police don't just shoot people for no reason, and Brown was dressed like a thug. Also, there was a riot after a "prayer vigil" last night, which just shows you These People are animals." Person A: "At least we can agree that the facts are not all in yet." Person B: "You're absolutely right. I bet there's all sorts of Facebook stuff showing that Brown liked violent rap music."

The FBI will take over the investigation, so there's at least the possibility that the police version won't be the final word on what actually happened.

Over at the Gateway Pundit, Stupidest Man on the Internet Jim Hoft hasn't yet settled on a narrative -- on the one hand, he gave screaming coverage to the looting, but in another headline, he called Brown's killing a "murder," although commenters were quick to explain it was obviously a "justified homicide,' because black thug, and you can't even understand a word that Brown's supposed friend is saying in a video describing the shooting.

Another protest in Ferguson is going forward today, despite earlier threats by police and the mayor to arrest anyone who showed up for the rally:

We're going to hope that the FBI agents taking over the investigation are a bit more informed on how the Constitution works, maybe.