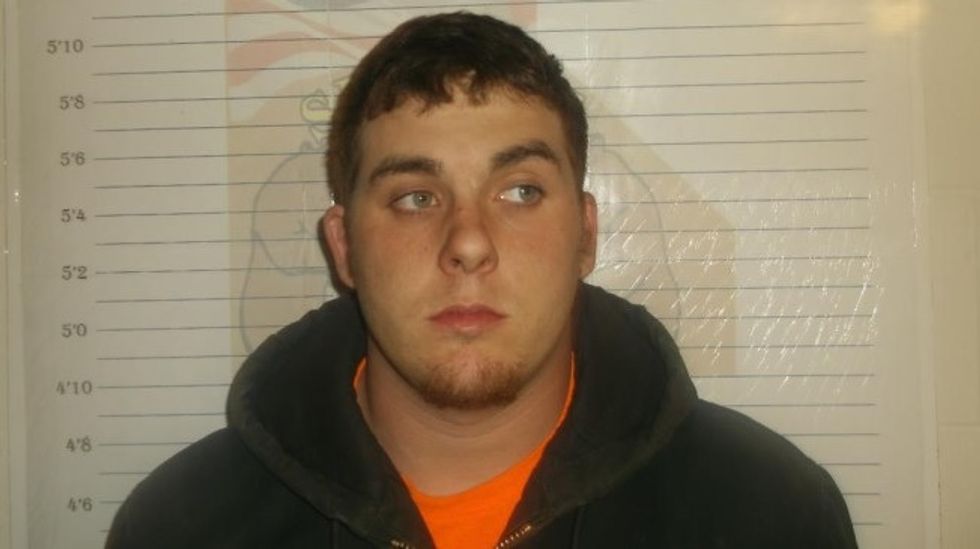 Some days, it feels like you can't trust anyone. Just ask Aryan chinbeard warrior Cameron Stout, pictured above, who earned himself a nice set of federal charges Tuesday after sharing his desire to shoot Barack Obama with a newfound friend who just happened to be a federal informant. Who also happened to be a former member of the Aryan Nations, now working with the feds, according to an affidavit in the case:

The informant met Stout last week while fishing and, the affidavit said, either Stout or his friend "made a rude hand gesture towards" the informant. A confrontation took place, but tensions cooled and the men ended up hitting it off. The informant eventually invited the two to dinner at his house.

After Stout's friend left dinner, according to the affidavit, the suspect allegedly told the informant about his plan to shoot Obama.

Yr Wonkette is not a lawyer, but we've watched enough teevee to think maybe there's at least an outside chance of an entrapment defense here? "Oh, hi, person whom I've generously forgiven for flipping me off, let's have dinner and you can tell me your dreams. Do they include shooting the president?" How did the informant even meet up with these losers at the fishin' hole -- was Stout wearing an "Ask Me About the Master Race" t-shirt?

Stout apparently told the informant that, regrettably, he just didn't have the right kind of gun to take out the president, and the informant generously "offered to put Stout in contact with an Aryan Nation leader," which is quite the lucky thing for a would-be assassin to hear from a guy he'd just met.

Now, even if this is entrappy, this Stout guy sounds like a candidate for the Group W bench all on his own:

The informant's girlfriend reportedly recorded part of the conversation.

Now we're convinced -- anyone who talks like a random selection from WND comments is probably the genuine article, not a blameless dupe. Stout apparently bragged about all the research that he'd done on "locations from which to shoot Obama at the White House and the church that the President attends" ... now wait just a damn minute here, since when does this president even attend church? Stout reportedly said that he'd researched wind speeds and possible sniping locations in Washington, and made diagrams which the informant turned over to law enforcement. And of course, there's the required racist invective, followed by a disavowal of racism:

"That nigger shouldn’t be President," Stout allegedly told the informant, adding that "some of my best friends have been niggers."

Again, that dialogue sounds sadly plausible. Stout and the informant went to meet the "Aryan Nations leader" -- an undercover officer -- to whom Stout laid out his new plan, which involved shooting Obama the next time he came to Kansas City, Missouri. After he asked for transportation to Kansas City, the officer arrested Stout, because come on, dude, you want a weapon and a ride?

And then Ashton Kutcher jumped out and recited a modified version of the "fourteen words" of white nationalism: "We must secure the existence of our people and a future for Punk'd children -- like you!"

Talking Points Memo didn't identify the federal law enforcement agency involved, but we're assuming it wasn't the Secret Service, since the sting was a success and no one apparently fell over drunk during the operation.