White Teenage Criminals Are Cuddly And Cute And White And Not Really Criminals Really! 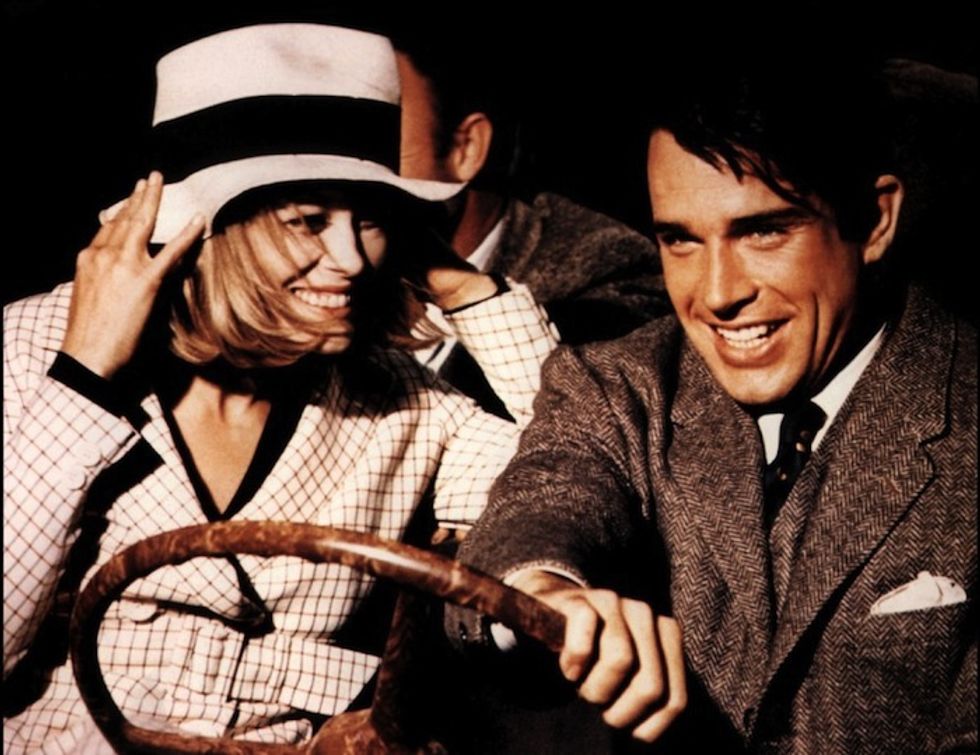 Dalton Hayes, an 18-year-old out on bond from a burglary charge, and Cheyenne Philips, his 13-year-old "girlfriend," ran away from their respective homes in Kentucky and stole a series of cars around the South before being arrested two weeks later. It's a simple enough story: star-crossed lovers go on multistate crime spree! We're rooting for ya, white kids! Here's the headline from the Associated Press, as published in the Los Angeles Times:

We did not cherry-pick this headline. "Bonnie and Clyde" was the dominant description used for "Hayes and Phillips," as evidenced by this snapshot from Google News:

The impact of leading the story with this allusion is not subtle. Comparing the teens to "Bonnie and Clyde" (and here we can be sure that this is meant to reference the archetypal lovebird-bandits so glamorously embodied by Warren Freaking Beatty and Faye Dunaway, and not the historical criminals, who weren't sexy at all).

Not as sexy. Weird!

Alluding to raffish American archetypes Bonnie and Clyde romanticizes and decriminalizes the subjects of the story, making their behavior seem, at worst, a childish imitation. The author has nudged us out of the mundane world of bail jumpers and kidnapping, and into a sepia-tone world of American myth. Let's go on to the lede:

Two teenage sweethearts suspected in a crime spree of stolen vehicles and pilfered checks across the South have been taken into custody in Florida, Kentucky authorities said Sunday.

There are several ways of editorializing about the relationship between an 18-year-old boy and a 13-year-old girl he has taken from her parents' house. "Kidnapping," for instance, is one that comes to mind. "Brainwashed" is another term a writer might employ here. Then, too, is the fact that in Kentucky, an 18-year-old having sex with a 13-year-old constitutes second degree rape. The writers choose none of these obvious descriptions of a relationship that we should intuitively see as predatory, and which is legally non-consensual. They don't even use the value-neutral term "pair," but instead, ratify the relationship with the most quaint, chaste, and cutesy noun they could possibly have used: "sweethearts." They even go so far as to emphasize the triviality of the pair's criminality by using "pilfered" to emphasize that the stolen checks were of small value.

Grayson County sheriff's officials say in a statement that 18-year-old Dalton Hayes and his 13-year-old girlfriend, Cheyenne Phillips, were arrested without incident about 12:10 a.m. local time Sunday in Panama City Beach. The two had eluded police in multiple states while raising concern about their increasingly bold behavior. Some media outlets had described the pair as a modern-day Bonnie and Clyde, the Depression-era lovebird outlaws.

Notice how the writer weasels out of responsibility for the Bonnie and Clyde analogy by attributing it to unnamed media outlets, even while he emphasizes its implications by underlining it with "lovebird outlaws."

Here's the point: It's not possible that this story would have been covered in the same way if our two anti-heroes were black. The story wouldn't have framed a relationship between, say, an 18-year-old black male and a 13-year-old black female as one of "sweethearts," much less one between an 18-year-old black male and a 13-year-old white female. There's no chance the story would have gotten three paragraphs in without mentioning Dalton's criminal record or that he was fleeing prior burglary charges. The narrative of black criminality is the photo negative of those about white innocence.

We could keep going like this, line by line, through the story, but we'll spare you. Because, in fact, the Bonnie and Clyde headlines were not the worst headlines. Try this one on for size: