Who Does ICE Want To Deport Now? How About A Guy With Down Syndrome? 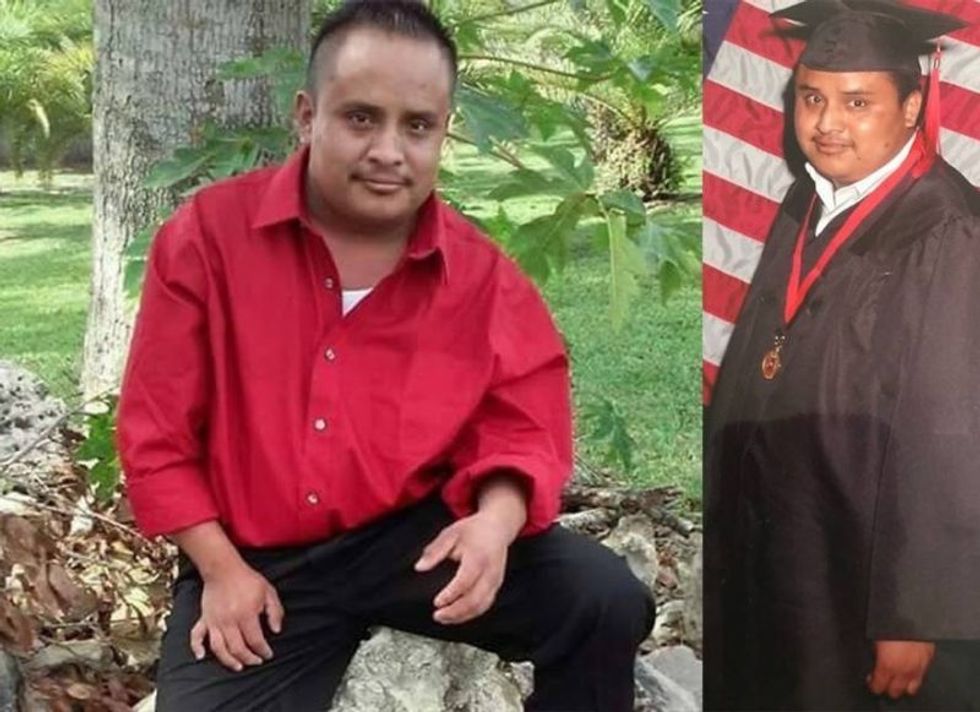 We're still trying to work out how deporting Juan Gaspar-García would make America great, even in the least bit.

Well of course it's come to this: Immigration and Customs Enforcement is now going after people with Down syndrome. In Florida, Juan Gaspar-García, 22, is being held by ICE in a detention center after a March 28 raid on a company where he works with his younger brother, who was freed after the raid because at least the brother is protected by DACA. Now Gaspar-García's family is desperately trying to get him released, as ICE goes ahead and starts processing him for possible deportation. The boundless creativity of the New Cruelty's efforts to remove every single undocumented migrant is, if nothing else, impressive.

White House Can't Decide Who's Lazier, Mexicans Or Democrats, Napping Under The Cactus In Their Big Sombreros

The hardest-working administration in history has thoughts on lazy Mexicans.

While his brother, whose name isn't being released, qualified for DACA, Gaspar-García entered the US when he was 14, after his mother died in Guatemala. On a petition site asking people to appeal for help from Senator Marco Rubio, Gaspar-García's sister Dolores says he "should be protected from deportation, even though he was unable to apply." He graduated from high school in 2007 under a special program for students with disabilities, and is among a million or so young people who could be eligible for DACA if Congress would act. You know, one of those folks John Kelly snarled were "too lazy to get off their asses" and apply.

“My brother does not have the ability to understand certain situations without a proper explanation because he has Down syndrome, and probably does not understand why he is there or what is happening,” Dolores told el Nuevo Herald. “He also has diabetes, he takes medication and it is very important that he is with us so we can take care of his special needs.”

Dolores said that if Gaspar-García is deported to Guatemala, he has no one to take care of him in his native country. His three siblings and his father live in Florida [...]

“We are a family of four. Juan is the oldest but we have always seen him as the youngest due to his developmental delays,” Dolores said. “In reality he does not know how to read, write or express himself well and stutters when he gets nervous. I’m sure he needs me right now.”

We're sure once this story gets reported more widely, Immigration Experts on the Internet will explain that's a real shame, but the law is the law, so maybe if the family cares so much about him, they should accompany Juan to Guatemala. America sure is great, huh?

A staffer for Marco Rubio's office said the office would reach out to the family; unfortunately, anyone whose life depends on Rubio having a spine is in big trouble. But at least ICE is communicating very clearly about the matter. Spokesperson Nestor Yglesias offered this take-all-prisoners statement:

“ICE’s Homeland Security Investigations special agents encountered Juan Gaspar-Garcia while executing a criminal search warrant at his place of employment. They contacted their counterparts with the ICE’s Enforcement and Removal Operations who determined Gaspar-Garcia was in the country illegally, arrested him and issued him a notice to appear in immigration court. His immigration proceedings are ongoing,” the statement says.

“ICE conducts targeted immigration enforcement in compliance with federal law and agency policy. However, as ICE Acting Director Thomas Homan has made clear, ICE does not exempt classes or categories of removable aliens from potential enforcement. All of those in violation of the immigration laws may be subject to immigration arrest, detention and, if found removable by final order, removal from the United States.”

Translation: Bummer about the intellectual disability, guy, but you're headed for Guatemala. We ARE the Law.

Still, it was very nice of Yglesias to also release a copy of ICE's manual on processing people with disabilities, which is not yet a cookbook. It says detainees who have a "cognitive, intellectual, or developmental disability” may be referred to a “multidisciplinary team”:

"Such detainees may face difficulties navigating the detention environment… Additionally, such detainees may not understand the process for requesting an accommodation or be aware of limitations on their access to facility programs,” the manual says. “Facility staff should provide appropriate assistance to a detainee with a cognitive, intellectual, or developmental disability, even if not explicitly requested (for example, reading and explaining a form to a detainee with limited cognitive abilities)."

It was awfully nice of ICE to avoid the phrase "special treatment." Some unfortunate associations there.

The Miami Herald cautiously notes, "It isn’t clear if any of those steps were followed in Gaspar-García’s case." No reason to worry about that, though, since ICE has that manual outlining its practices for people with disabilities. They look like pretty good rules.

And as everyone knows from the case of Rosa Maria Hernandez, the little girl with cerebral palsy ICE scooped up in Texas last year, ICE would never fib about how it implements its written policies. In Rosa Maria's case, ICE said it didn't violate its policy against detaining people at hospitals, even though she was taken into custody as soon as she left the recovery room after emergency surgery. You see, the "enforcement action" began when the ambulance went through a highway checkpoint.

This isn't even close to normal. This will take years for the light to normal to reach.

But let's not forget -- Rosa Maria was eventually reunited with her family, although at the time, she was still facing deportation. And as we noted last week, ICE is pursuing deportation against Guillermo Peralta, a severely mentally disabled man who can't even say his own age, although it has at least released him from detention pending a hearing. That hearing wont be held until 2020, either because even ICE is capable of shame, or, we fear, ICE assumes it will get less press attention.

That's Trump's America: A place where out-of-control immigration enforcers are going after people with mental disabilities. They really are coming for those who are least able to speak up for themselves. But that's OK, because, you know, it's the law.

Yr Wonkette is fueled by reader donations and incandescent rage. Please click here to help convert some of the latter into writing. And for Christ's sake do everything you can to elect Democrats this fall.