Who Made Ben Carson's Wife Buy That $31,000 Dinette Set? The Deep State, Obviously! 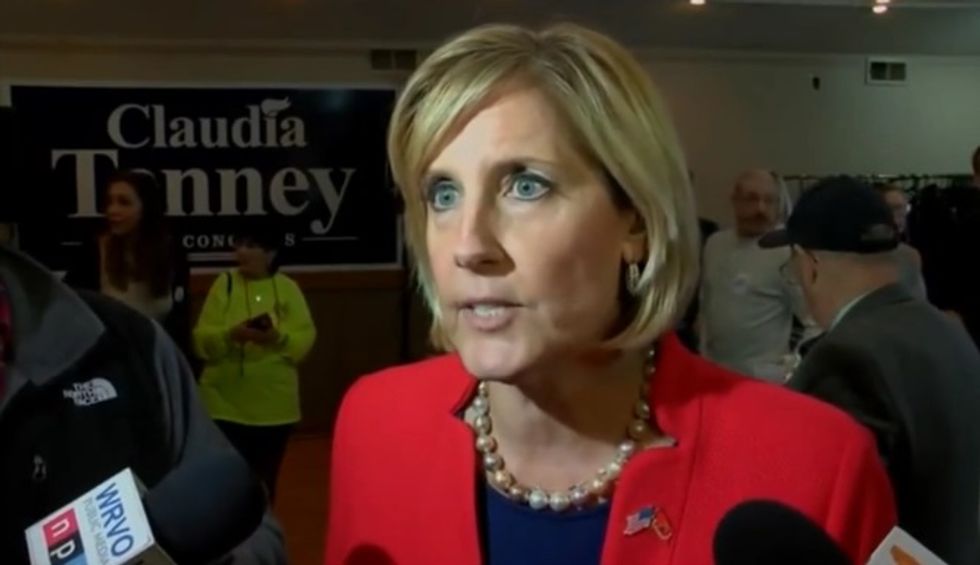 Secretary of Housing and Urban Development Ben Carson has been having one heck of a time trying to explain how his office ended up ordering that $31,000 dining room set last year; in a House hearing Tuesday, he appeared to blame his wife for the decision.

Before we get all judgey about the free-spending ways of Trump administration cabinet members, we should consider the possibility that both Ben and Candy Carson are actually victims of a smear campaign by enemies of freedom -- bet you didn't think of that, did you? See, that's why first-term US Rep. Claudia Tenney, a Republican from upstate New York, is in Congress: to set the record straight about the REAL swamp in DC, which apparently involves some very bad people ordering expensive furniture to embarrass true conservatives.

During an interview with local radio show called "Talk! Of the Town" (But Not! About Punctuation), Tenney took a question about that darn dining room set. She explained the “Ben Carson story is so misunderstood” and then tore the lid off the whole sordid Washington Swamp effort to bring down a great, albeit somnambulant, man:

First of all, I like Ben Carson a lot. I think he’s really trying to do a great job there. But his staffer, one of his key people, was in my office the other day to talk about some of the housing issues that we have in our region and we were talking about that and he said ‘you know, that’s the most --

Here Tenney trailed off, possibly considering how to reveal the ugly truths revealed to her by one of Carson's key people, whom she didn't identify because you simply don't know what the enemies of Making America Great Again are capable of. Treason, vote-rigging, and even politically embarrassing furniture purchases:

“Somebody in the Deep State, it was not one of his people apparently, ordered a table, like a conference room table or whatever it was for a room,” Tenney continued. “And that’s what the cost was. Ben Carson tried to -- he said “you know how hard it is to turn it back because of the way that the procurement happens?”

Tragic, really. We should also note that the Daily Beast's Gideon Resnick is appropriately cautious about where exactly this Deep State Furniture Cartel theory came from:

It was not clear if Tenney was agreeing with the conclusion offered by the staffer that the Deep State was behind Carson’s furniture purchase or if she was offering her own line of thinking on the matter. Either way, Tenney’s statement appears to be wrong. A tranche of recently-released emails indicated that Carson and his wife were directly involved in the process of picking out furniture.

Oh, Gideon. Don't you see that if Deep State operatives can fabricate the Trump-Russia hoax out of thin air, threaten an innocent dachshund, and mysteriously order dining room furniture against the will of a cabinet secretary (and brilliant neurosurgeon!), then forging emails would be as nothing to these people?

Oh, sure, maybe in that House Appropriations Committee hearing Tuesday, Carson himself said that he'd actually had very little input into the selection of the dinette, and was astonished by the prices he'd seen in a catalog, but the reality was that "I left it with my wife." But can we know for sure Carson is able to speak freely? Who knows what mysterious Deep State forces might be compelling him to shift the blame to someone else, which members of this administration would never stoop to?

Besides, in the radio interview, Tenney had plenty more to say. One host asked if nepotism may have played a role, since Candy Carson was involved in the furniture deliberation. Now that's just silly, Tenney explained:

“Nepotism is when you hire a family member,” Tenney corrected them. “What it is is that people in the Deep State who’ve been there, they might be—they say ‘hey we’re going to buy this because this is what somebody else did.’

“I know that Ben Carson did not order that table,” Tenney continued. “It has nothing to do with him. He comes from, you know, poverty.”

Ergo, he is incapable of making bad decisions in an administration where other cabinet members are racking up millions of dollars in jet rides, building Cones of Silence in their offices, or blowing amazing amounts on new doors. You have to go for the obvious explanation: Somebody's setting up Ben Carson.

Rep. Tenney has a penchant for fascinating ideas, like after the Parkland massacre, when she wondered why “so many of these people that commit the mass murders end up being Democrats,” then had a hissy at a reporter who insisted on asking her more questions about her statement, eventually yelling that the reporter's questions were themselves "Fake news": "I answered your question every which way. It is fake news."

Also, way back in 2013 when she was still in the New York state Assembly, Tenney made it clear that there's nothing racist about the name of the Washington DC football team because she was certain a representative of the Oneida Nation government wasn't really a Native American at all, because of a problem with his great-great grandmother's tribal registration paperwork, so THERE! He couldn't be offended by the term "Redskins" because he wasn't even one himself, and then she and Tucker Carlson shared a very smug smile at having Owned The Libs.

You be you, Rep. Tenney. If you don't get tossed out of office this fall, you could join the pantheon of Congress's greatest idiots: Gohmert, Bachmann, that one guy who said science was satanic, and that crazy one with the aspersions on his asparagus. Oh, that was Gohmert again. Funny how we keep thinking of him when we write about Claudia Tenney.

Yr Wonkette is supported by reader donations. Please click here to do your part for the Deep State. Don't make us order you furniture you can't afford.