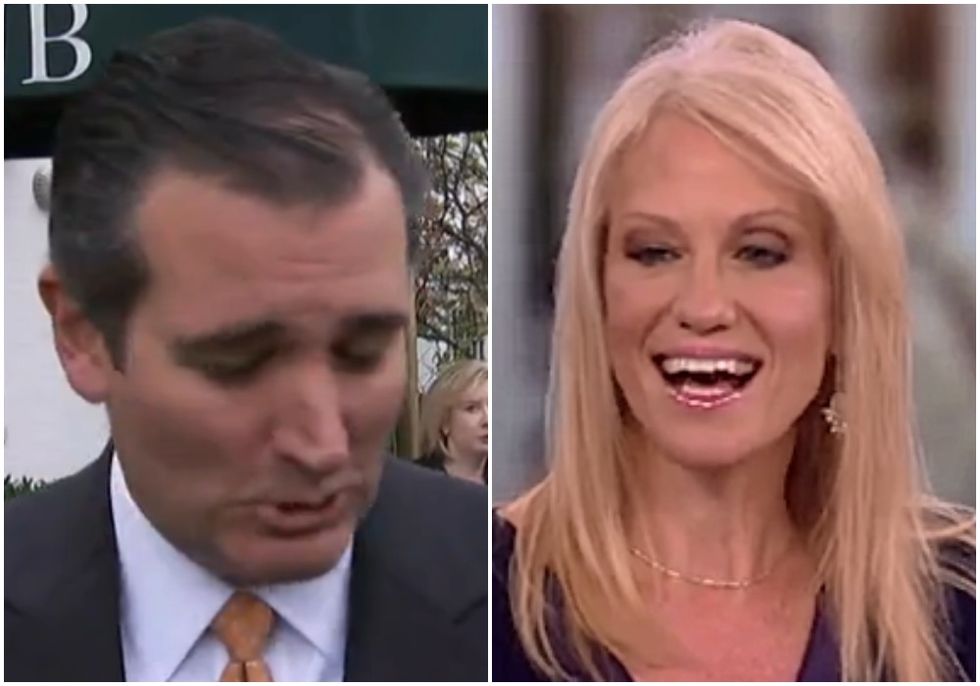 Kellyanne Conway, a known bad person whom everyone hates, and Ted Cruz, another known bad person whom everyone REALLY hates, are having an informal contest to see who can be the bigger hypocrite, and in general who can be the bigger A-hole. They don't know they are having this contest! But both happen to be APPALLED JUST APPALLED WE TELL YOU by how Democrats and liberals don't respect our new Dear Leader Donald Trump, and even worse than that, those awful libtards are acting like they are going to obstruct the orange man-child from day one, and every day after that until he is no longer in office, which will hopefully come sooner than later. OH MY STARS AND WELL I NEVER!

It was a squeaker like a mouse fart is a squeaker. (We should call him President Mouse Farts, PASS IT ON!) He lost the popular vote BY MILLIONS, and his electoral college total was pathetic by Obama, Clinton, and Reagan standards.

“The professional political left is attempting to foment a permanent opposition that is corrosive to our constitutional democracy and ignores what just happened in this election,” she said. Liberals cannot, she added, “wave magic pixie dust and make this go away.”

Oh go open up a can of dicks, nobody is pretending this didn't happen. And yes, in a democracy where a solid minority manages to elect an autocratic, thin-skinned, incurious thug with no respect for our American institutions -- LOOK AT HIS ENTIRE TRANSITION SO FAR FOR EVIDENCE! -- to the presidency, you bet your ass there's going to be a strong opposition, and it's going to be there so said autocrat isn't able to actually dismantle our country. Deal with it, Conway, you signed up for this, YOU OWN IT.

“He said, ‘I’ll be president of all people,’ but the left is trying to delegitimize his election,” she said. “They’re trying to deny him what he just earned. So why is the burden always on him?”

Reacting to the same passage, journalist Jonathan Chait points out the insane hypocrisy of whining about this, considering how the president-elect has behaved FOR YEARS:

Chait forgot to type "Collect Underpants" and "PROFIT!!!" but we will let it slide this time.

Now let's turn to the creepface senator from Calgary, Ted Cruz, who has completely gotten over how President Mouse Farts (it has a ring to it!) said his dad killed Kennedy and insinuated that his wife Heidi is unfuckably ugly (because Ted Cruz is craven, which is part of why everyone hates him). Cruz is SHOCK AND AWED at all these Democratic politicians vowing to obstruct Trump and the GOP, because who ever heard of such a thing?

UNFAIR! The only response that needs is this:

THAT IS TRUE. THAT HAPPENED. And because Ted Cruz is so gross, if you watch the video, you might feel like you need a bath AFTER LISTENING TO A DR. SEUSS STORY:

But even more than that, hmmmmmm, do we remember the Obama years? Yes, we do, as they are still going on, at least for a few more minutes! Do we remember the phenomenon of the GOP-induced government shutdown? Senator Turtlehead himself, Mitch McConnell, famously telegraphed the constant obstruction the GOP was planning when he said his primary goal was to make Obama a one-term president. That, er, did not work out well for him.

Oh, and we seem to remember another fight that just ended, where Republicans, led by McConnell and joined happily by Cruz and the other douche-poodles in the Senate, arbitrarily decided that Democratic presidents don't get to nominate Supreme Court justices if it is the last year of their presidencies and Scalia dies. Yeah buddy! We really want to hear more about how it's SO MEAN AND BAD how Democrats won't play lapdog for our new Republican president, especially when they've elected a man so dangerously unqualified for the presidency that not one living president managed to vote for him, much less endorse him.

Wonkette's final judgment on the "who sucks the most and is the biggest dick?" contest between Kellyanne Conway and Ted Cruz is that usually we would award the prize to Cruz by default, but Conway is a formidable opponent, therefore they both win and they both lose, and they definitely both need to STFU.