Who Was This Nazi Speaking At The Roy Moore Rally Last Night? Not Steve Bannon, The Other One 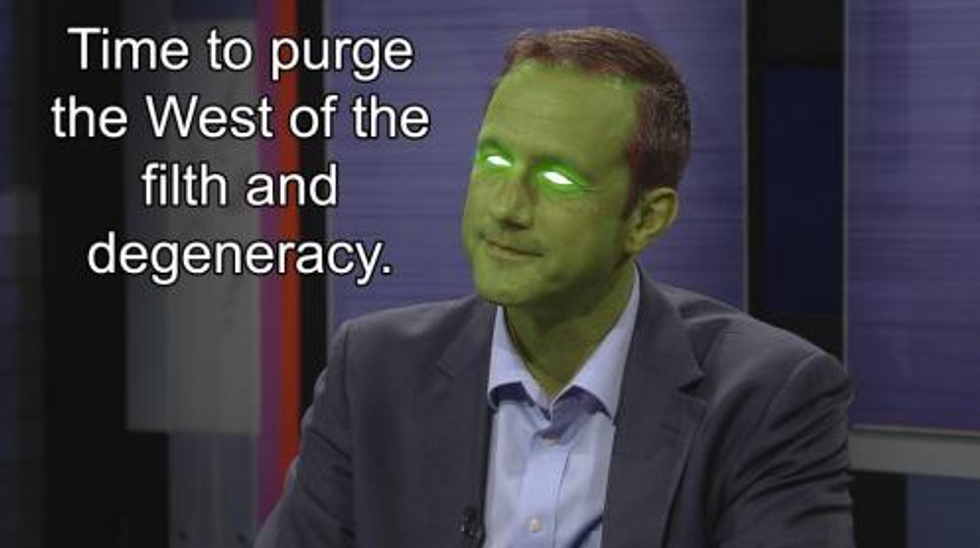 Here is a picture of Paul Nehlen that he retweeted so we assume this is his official portrait!

We at yr Wonkette love to tell you about things that annoy Paul Ryan, but in this case we've got mixed feelings because we have to tell you about Paul Nehlen. He is running in a primary against Ryan for the second time. He is a piece of fucking work, to say the least.

You might remember him as the guy Trump nearly endorsed over Ryan, which led to Ryan winning the primary by 68 points (so close!)

I would screencap the time a couple days ago that he told John Podhoretz to "eat a bullet" but I can't because Podhoretz blocked me on twitter for implying he would be more comfortable in the late 1800s after he insulted yr Editrix and yr Wonkette generally and I went riding in like the cavalry with a zinger that was apparently far too harsh for Mr. Podhoretz! Anyway we wish he would grow but we don't want him to eat a bullet and we think it tells you a lot about Nehlen that he'd say something like that just because someone told him he had a pea-sized brain.

Nehlen is your typical halfwit Pizzagater. He likes to run gross ads that make you long for the halcyon days of Willie Horton when we were innocent and free. He is an utter waste of space, an assortment of molecules fitted together improperly, and the one nice thing about him is that he probably annoys Paul Ryan more than even Randy Bryce does.

We can expect the MAGA loons and assorted racists to be entering primaries nationwide. This is a Bad Thing overall for obvious reasons, but here is a silver lining: At least once in the next few months, Paul Ryan is going to have to engage with Paul Nehlen, a man who thinks he looks good as a luminous toad.

Oh, and he was a big treat speaking at the Roy Moore rally last night, in case you're wondering why we're writing about random Nazis. MAGA!

If you give yr Wonkette monies we will pay our writers and they might of their own free will donate to things that will annoy Paul Ryan generally so cough up: