Who'll Be Piling Out Of The Clown Car At The Republican Convention? Not Sarah Palin, Somehow! 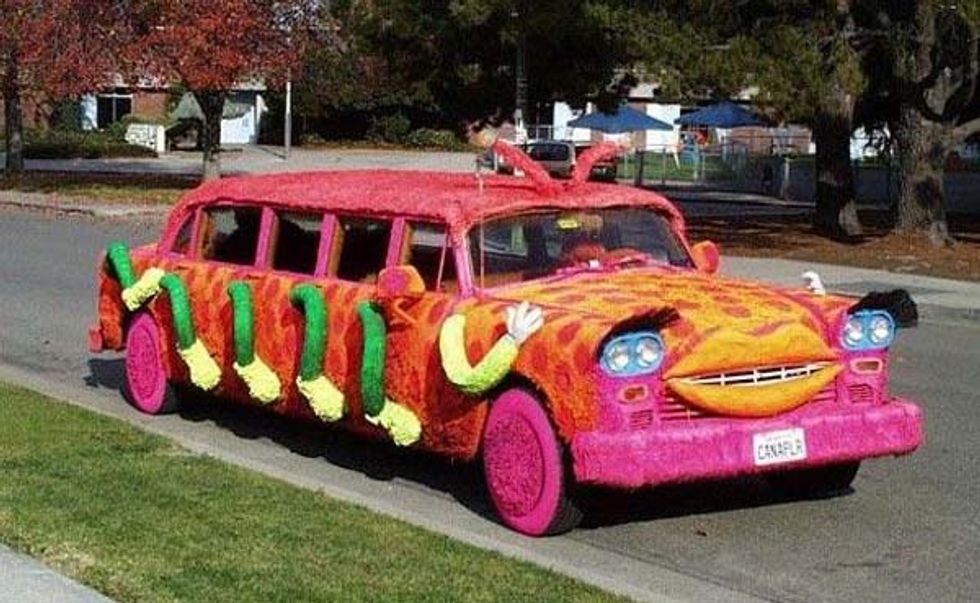 Oh, joy! The official list of speakers at the Republican National convention is out, and it's going to be simply AMAZING! We'd assumed the list would be so heavy on C-list celebrities that a game of Hollywood Squares might spontaneously erupt, but instead the crowd seems to be loaded with wingnuts, Trump family members, and embarrassed Republican functionaries who have to be there. So who's showing up at this shitshow? Here's the full list released Thursday, subject of course to last minute surprises like Clint Eastwood lecturing 100 empty chairs and pretending it's the U.S. Senate:

Because we love you -- and more importantly for our own mental health -- we will not explainer everybody on there, but just a few lowlights (which is probably everybody, really). The New York Times reports that the first night of the convention will be a festive tribute to Benghazi; we're betting the RNC has hired Michael Bay and some Broadway types to put on an all-singing, all-dancing recreation of the attacks on the diplomatic compound and CIA annex, complete with an aria by a holographic Hillary Clinton wailing in disappointment that only four brave Americans died.

Grievance Night will continue with an appearance by Border Patrol agents and one of the few black people scheduled to speak, Jamiel Shaw Sr., whose son was killed in 2008 by an undocumented immigrant. Shaw is regularly brought onstage at Trump rallies in the dual role of black Trump supporter and waver of the bloody "Mexicans are murderers" shirt -- if Trump thought he could get away with it, he might actually hand Shaw a prop for that. Other Night One speakers will include Iran Grievance Expert Tom Cotton, The Blacks Grievance Expert Rudy Giuliani, Wonder Bread Bag aficionado Joni Ernst, and Entrepreneur and Marrying Well Expert Melania Trump. Mrs Trump's Online Flying Monkey Defense Brigade has not been invited to run around the stage carrying humorous cartoons of Jews being executed.

We're already tired of the chronological thing the Times was doing, so instead we'll let you look up the other nights yourself and pick out some notable looninaries in the crowd.

You've got your former Trump adversaries, none of whom were going to be allowed to speak unless they endorsed him, except a few haven't. Among the endorsers, you got your Mike Huckabee, your Chris Christie, and your Ben Carson. Yes, he will be there to snore for us. Scott Walker hasn't quite endorsed Trump, but he'll get to pant and slobber on him anyway like an inbred puppy-mill golden retriever, and Ted Cruz will also show up to remind people exactly how sad the last choice to stop Trump had been.

We'd simply skim over the list of Republican political leaders, who have to be there, except we should note that John Kasich won't be attending the RNC in his own damn state, and also that Paul Ryan, as official chair of the convention, will very conveniently be on hand just in case the Trump-Dumpers manage to pray really hard and make God reverse the Will of the People. (Wonkette's Editrix still has a fiver that says Ryan ends up the nominee. She's like that.) If anything is left standing of the arena, Ryan can accept the nomination then.

Among what Slate calls "the party's inflammatory wingnut/conspiracy-theorist/'political correctness' caucus," there's Carson again, Huckabee again, Giuliani again. There's also Florida Attorney General Pam Bondi, who totally supports gay people when they're massacred in a nightclub but not any other times, and who also conveniently dropped an investigation into Trump University because she decided it was a good school and also Donald Trump gave her a nice campaign contribution. She may even share some real estate tips! In addition, we'll hear from Fox News's favorite black sheriff, Milwaukee County Sheriff David Clarke, who wishes single black moms would teach their kids to stay out of the way of cops' bullets and likes to remind people they all need more guns. He's bound to be a hit, since he thinks Black Lives Matter is a "subversive movement" and last fall even tweeted that he expects BLM to join up with ISIS and destroy America. No, really! He even followed it up by guaranteeing he's never been wrong about the group:

Sure, it hasn't happened yet, but just you wait. The spaceship behind the comet will be along any day now, too.

Oh, and then there's the entrepreneurs! Super Libertarian Peter Thiel will say stuff about getting rich on the interwebs, possibly through purchasing real estate seminars personally endorsed by Donald Trump. Or at least maybe he'll explain what Liberty-making fun it is to sue the fuck out of Gawker, only behind the scenes, by paying others to do it. Classy! Also, Dana White, the head of UFC, will say things about how Donald Trump will keep America Free for Ultimate Fighting, which under a Trump presidency may be introduced as an alternative to the Supreme Court. Oh, and great entrepreneur Kerry Woolard will be there, too. She's the manager of the Trump Winery, and knows how to prosper in Donald Trump's America, yes sir she does.

We can't possibly top Friend of Wonkette and one of Donna Rose's favorite stage managers Charlie Pierce's observations on these other hangers-on, so we'll just steal this paragraph:

Marsha Blackburn will talk about how you can buy baby parts in the Planned Parenthood section of your local Gas 'n Sip, and Mary Fallin will reprise her 2012 triumph about how Oklahomans made Oklahoma without any help from big government, thankyewverymuch. And Tim Tebow will throw out some ideas, none of which will connect with their intended audience.

There's one name we don't at all recognize on that list, though: "Andy Wist," who has literally no internet presence. Nobody has a clue who he is, if he exists at all; Vox notes that the name only shows up in Google searches which show he's on the RNC speakers list. Is it really Sarah Palin? Could be -- "Andy Wist" anagrams to "Sandy Wit," which sort of works. Or maybe it's an accountant who'll reveal Trump's no billionaire after all, since it also anagrams to "Tiny Wads."

Hell, maybe "Andy Wist" is a place-filler for the moment when Trump steps up to the microphone, removes his rubber mask and silly wig, and reveals it's been Andy Kaufman under there the whole time.