Who's The Best Liberal To Take On Hillary Clinton? Mitt Romney, Of Course 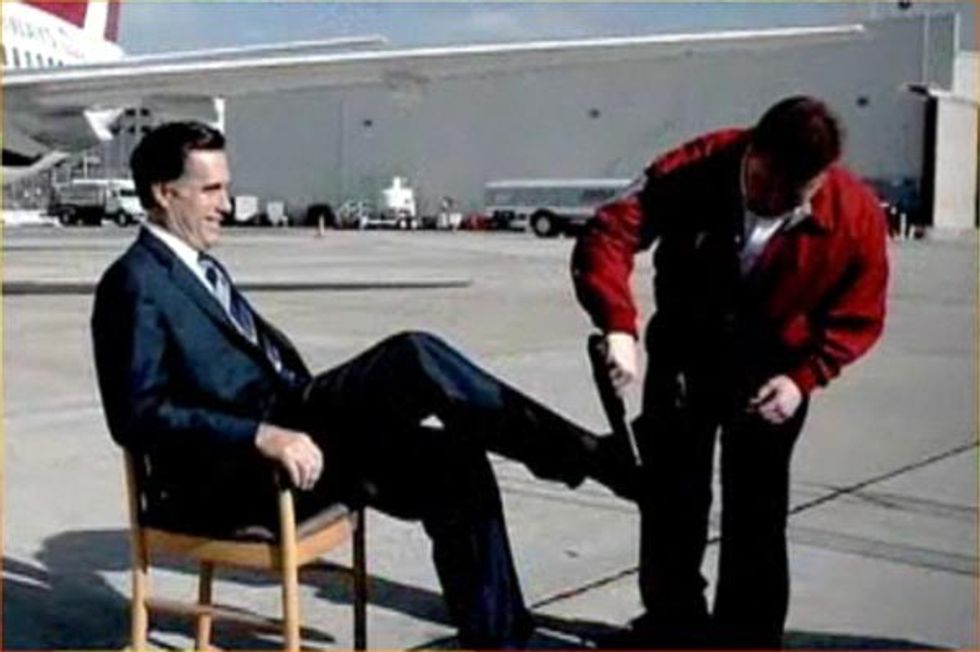 Good news, liberals! While Hero Badass Queen For Everything Please Sen. Elizabeth Warren still is not answering those 2016 draft calls, there is a super lefty liberal who is dying SO HARD to be your president. He will take on that corporate Wall Street shill Hillary Clinton and sing sweet populist lullabies into your ears while eating the hearts of the rich right before your very eyes, for your politicaltainment pleasure. That's right, tree-huggers, Mitt Romney is your new liberal hero:

"I'm thinking about how I can help the country," he told hundreds of students Wednesday night.

In his comeback bid, Romney has focused particular attention on the poor and middle class as he tries to broaden his appeal after being cast in 2012 as an out-of-touch multimillionaire.

"How can Secretary Clinton provide opportunity for all if she doesn't know where jobs come from in the first place?" Romney said, squarely attacking the Democrats' potential 2016 nominee.

"We need to restore opportunity, particularly for the middle class," Romney said. "You deserve a job that can repay all you've spent and borrowed to go to college."

Yes, yes, we all know and remember and still laugh our butts off about that time Mitt Romney hated the middle class. That's why every single report on Romney's speech at Mississippi State University on Wednesday night reminds us of Romney's infamous "Ugh, the 47 percent, amirite?" moment, to illustrate the stark difference between the old Romney and the newest version of the new Romney. (Seriously, it's true. Every single one. You can Google it.)

The latest Romney update comes with neat new apps, like Attempted Self-Deprecating Humor, because it turns out that making fun of other people -- like, for example, telling some so-beneath-him yokel his homemade cookies look gross, dude, like they're "from the local 7-11 bakery or wherever" -- was more a bug than a feature.

New Mitt, however, comes with New Jokes about New Mitt, who is just as rich as Old Mitt, but with jokes about it!

Applause and guffaws! Also, it is important to note, because the Washington Postsaid so, Mitt is charging a mere measly $50,000 for the pleasure of listening to him try out his new presidential campaign stump speech, "most of which will go to charity." New Mitt likes charity, unlike Old New Mitt, who cried big fat tears when he donated to his own church, and did not even get nearly enough credit for it because people still said he was "rich," UNFAIR! This New Mitt loooooves giving away his money, though. New! Improved! Different! Liberal hero, take THAT, Hillary!

More importantly, however -- so note this with an extra thick Sharpie -- Mitt's fee is "dramatically lower" than the fee Clinton charges universities for the privilege of her speech-making presence. So, like, make some conclusions about that.

The obvious take-away, America, is that this new Mitt fellow is all about The Common Man and The Working Class and The People Who Aren't Filthy Fucking Rich Like Him. That's why he's watching Elizabeth Warren speeches and trying to crib her best zingers and saying nice things about the minimum wage, which he used to hate, but come ON, he flip-flopped on that one sooooo long ago. [contextly_sidebar id="5SqcNoGw3O8EnC6TXbMCcpzGCrHZnffA"]

It is 2015, and we're still getting the Mitt spins. Seems like only a few years ago, he was insisting to the Republican base that he was "severely conservative," which they severely did not believe. Before that, he tried to run to the left -- the LEFT, people! -- of Ted "Liberal Lion o' The Senate" Kennedy in Massachusetts.

(Time out for a fun fact: Contrary to Internet Legend, Romney did not say, in 1994, that he'd be "better than Ted" on gay rights. Sure, that quote-unquote "quote" was crammed down his throat in the 2012 GOP primary as evidence that he was a total RINO, but it never really happened. Romney ACTUALLY said:

I have several friends in the gay community who are supporters, who are working in my campaign. I think they believe I would be a better senator.

Yeah, yeah, some of his best friends, yadda yadda ... But that's not nearly as sexy as the Bay Windows clickbait-y headline, "Romney: I'll be better than Ted for gay rights." Too bad for Romney that paraphrase shape-shifted like Mitt himself into a direct quote THAT HE NEVER ACTUALLY SAID. Oh well. Al Gore called, on the internet, and said "Boo hoo, asshole.")

Is there any other man (or lady-man) in America who would, in a single lifetime, try so desperately and unsuccessfully to persuade voters he's to the left -- no, the right! no, the left! -- of whichever political opponent he happens to be facing in that particular second? It has yet to work for Mitt, and it will yet-to-work again in 2016, but shhhh. Let's not ruin our own fun by telling him that.

Who wants to watch Mitt try to earn the coveted Ralph Nader endorsement?