Who's Your Next Shooter? That Weird Kid, Right? 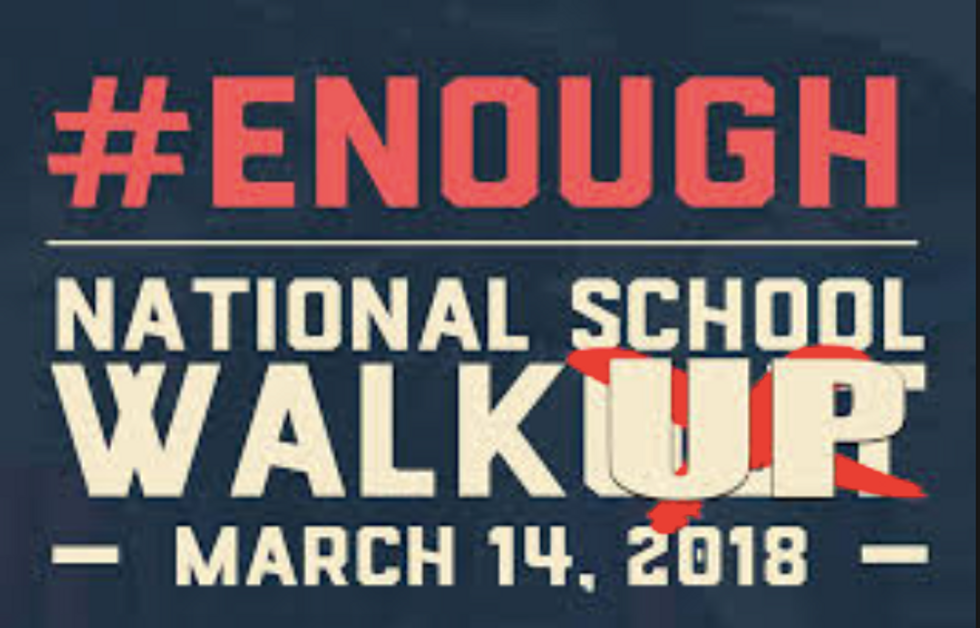 For every action, there is a reaction. In response to Wednesday's national school walkouts meant to protest the fact that our country's lax gun control laws are contributing to the scourge of mass shootings, many people chose instead to advocate that students #WalkUpNotOut instead. The initiative was started by a Facebook posting by middle school teacher David Blair, who felt that the real way to prevent school shootings was to be nicer to kids who are bullied.

First of all, put down your stupid phone. Look around you at your classmates. Do you see the kid over in the corner, alone? He could likely be our next shooter. He needs a friend. He needs you. Go and talk to him, befriend him. Chances are, he won’t be easy to like, but it’s mainly because no one has tried to like him. Ask him about him. Get to know him. He’s just like you in that respect; he wants someone to recognize him as a fellow human being but few people have ever given him the chance. You can.

Next, see that kid eating lunch all alone? He could likely be our next shooter. Invite him to eat lunch with you. Introduce him into your fold of friends. You’ll most likely catch a lot of flack from the friends you eat with because they don’t want him upsetting the balance of their social order. After all, who you hang out with is critical to your status, is it not? If status is important to you, don’t you think it’s important to him also? The only difference being that he has no status because generally, shooters have no friends. Are you serious about wanting to make your school safe? Invite him to your lunch table and challenge your friends to do something meaningful with thirty minutes of their lives each day.

Firstly, Blair is presenting this as an "either or" situation. The kids don't really need to protest the gun laws, because actually they should be doing this other thing instead. It's advice in the same key as "actually it's about mental illness, not guns" and "thoughts and prayers" and "the real answer is to arm the teachers." It provides a way for people who do not want gun control -- despite the fact that it would be the most effective way of curbing shootings -- to feel morally superior, or at least morally equal, to those who do. It's just the new "I care about the kids, but not enough to give up my guns, so here is an even BETTER way we can handle this situation, without addressing the gun issue."

Bullying is as psychologically (and sometimes physically) traumatic as any other form of abuse. We don't treat it like it's "real abuse" because it comes from other children, but that doesn't lessen the actual impact on victims, or the amount we should take it seriously.

The fact that anyone expects a child to go to school every day to be trapped in an inescapable situation where they know they are going to be made fun of or ostracized for eight hours, to have nowhere to sit at lunch and end up eating in the bathroom, to be ripped apart and mocked for everything they wear, every move they make, to have people only pretend to be nice to them as a joke, to have people torture them just because making someone cry is hilarious -- and come out of it unscathed because "whatever, kids are cruel!" is, actually, completely insane.

What Blair is suggesting these kids do is great. However, to suggest that victims of this kind of abuse are potential murderers, and that the reason you should be kind to them is to prevent them from shooting up your school? That is a lot less great.

Teach kids to be kind, to stand up for kids who are bullied, and to reach out to them because it is the decent, human thing to do. Because they will be able to look themselves in the mirror the next day. So they can look back when they are older and be proud that they were never cruel. Not because "this is the best way to prevent a school shooting."

The first thing I thought upon reading his screed was, "When I was going through that shit, if I had a gun, I would have been a hell of lot more likely to turn it on myself than to ever hurt someone else." It would have been fast. It would have been easy. It would have likely been more effective than eating a bottle of Tylenol was. That wasn't any good either, and I am glad I did not ever have the option of a gun, because we did not have guns in our house. That's the thing about guns, really. If you have one, the option is there. Maybe you'll never take it, maybe you'll never hurt yourself or anyone else, but simply having that option makes it a hell of a more likely than if you don't.

The idea of looking at victims of bullying as "the next school shooter" is infuriating and insulting. These shooters, actually, have far more in common with bullies than they do with victims. Many of them were even bullies themselves, or were abusive and sadistic to others in their lives.

Nikolas Cruz was abusive to his girlfriend. Eric Harris and Dylan Klebold, the Columbine shooters, were known to bully other kids themselves and were not the primary targets of bullying in that school. Harris wrote down his fantasies of raping girls and tearing apart their bodies, and when he had a falling out with a friend, "he vandalized the boy’s car and home, posted a homicidal threat on his website, and wrote about wanting to go to the boy’s home and spit on him and his family, urinate on them, and torture them before blowing up the house." They were not victims, they were perpetrators. They were sadists.

You could say that many, if not most, of these shooters, have the mindset of a particularly sadistic bully without the social power to accompany it.

Lumping victims of bullying in with mass murderers is shitty and cruel, and it will only serve to ostracize them more and make things even worse for them. Things did not get better for kids who were different after Columbine, they got worse. Despite the fact that Harris and Klebold were not even really bullied, schools started treating every goth kid who was into Marilyn Manson as a potential Charles Manson. Those kids were not sitting around writing about how much they wanted to rape women and tear up their bodies, they were just writing bad poetry and smoking cloves. They didn't deserve that.

There are no statistics showing that victims of bullying go on to hurt people at a higher rate than those who are not bullied do. In fact, a pretty large portion of them -- at least all the ones I know -- grow up and try to do things to prevent others from ever feeling the way they did growing up, to fight for the oppressed and to try and make the world a better and more tolerant place. The revenge they dream about is success. And escape. And also never, ever having to hear the insidious phrase "if you just ignore them, they'll give up and leave you alone!" again.

Again, kids should do everything that Blair says they should, but they should do it because it's the decent thing to do, and not because "that kid could be the next school shooter." They should also protest the gun laws that make it possible for these kids to become mass shooters in the first place. There are a lot of things we can do, as a society, to work towards making this place better for kids who are bullied, and better at making it a place where we don't have these mass shootings anymore. We can keep trying to fix things as best we can. We can work on teaching young men how to process their emotions in a healthier way, and stop stigmatizing seeking psychological help as somehow "unmanly."

High school ends, even if while you're there it feels like forever. Freaks, geeks and nerds grow up and run away to make their weird work for them by becoming artists and scientists and activists and writers for Wonkette. Disturbed kids can get psychological help. Bullies can even grow up and learn and grow and change and become better people. But once the gun is there, once the gun is an option someone can take, whether they use it on themselves or on someone else, it's not fixable anymore.

Wonkette is home to several non-murdery former victims of school bullying, and is supported by readers like you! Click here to tip us!