Why Does MSNBC Think We Want To Watch Joe Walsh Being Racist (Again)? 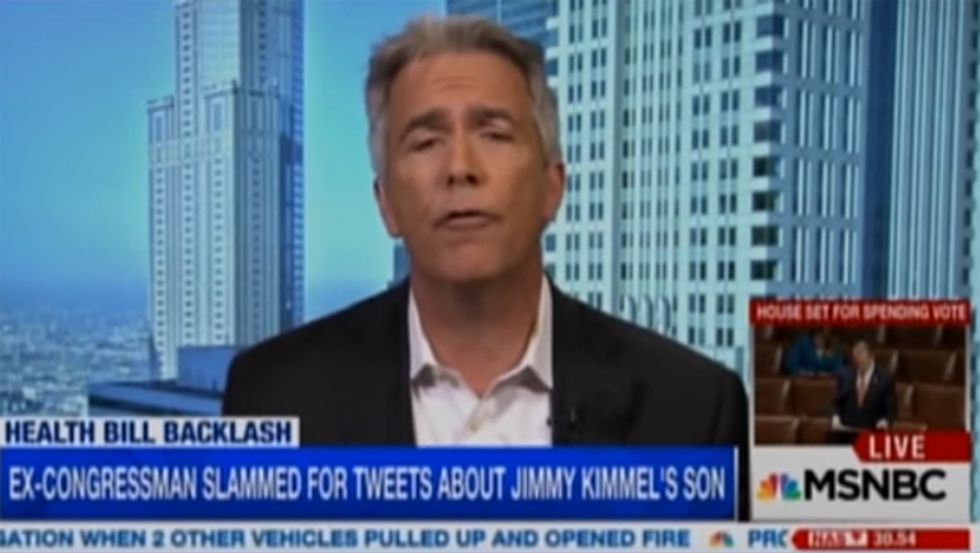 We'd never sink so low as to use a mid-word screengrab that makes him look dumb...

Excuse us, please. Just a little question, if we may? Why the everloving fuck does MSNBC insist on ever having one-time-congressman, deadbeat dad, and ignorant racist shithead Joe Walsh on the cable teevee, ever? Besides the fact that he's available and likely to say incredibly stupid stuff? OK, that kind of answered itself, didn't it? Following Walsh's brave insistence that Jimmy Kimmel's womanly emotions would never persuade Joe Walsh to pay for any losers' stupid sick babies, MSNBC's Ali Velshi had Walsh on to let him dig that hole a little deeper:

A late night comedian gets all teary eyed and understandably so, and then he gets political and that moves our health care policy? And one more point, I got no doubt that what Jimmy Kimmel said the other night will move Republican votes probably tomorrow. I don't think that is healthy.

Deadbeat dad knows what's healthy for America, that's pretty rich. But then Walsh went on to explain the only thing thing that will lower healthcare costs is the free market, because it's the most wonderful thing ever. Velshi pointed out -- as he is awfully fond of -- that there is no country in the developed world with a free-market health system, and that the USA spends more money to cover fewer people than any industrialized nation. Ah, but Walsh knows why that is: None of the other industrialized nations have to deal with all the lazy shiftless nonwhite people America is stuck with. Not that he used those exact words, but you don't have to be a dog to hear this whistling:

Velshi kept coming back to the fact that every other industrial democracy somehow manages to cover all citizens, at a lower cost per patient, with better healthcare outcomes and life expectancy, and darned if Walsh didn't keep coming back to how that could never work here, because Europe and Canada don't have black people sucking up all the health care money:

Despite Velshi's stupid statistics showing that America doesn't actually have the best medical care in the world, Walsh also insisted that "people come here when they really need quality care," which simply isn't true outside the world of your crazy uncle's emails.

In any case, the real problem is all those inner-city browns, which the European countries don't have because they're homogeneous, at least until the Muslim refugees flood in like vermin, and so don't even mention single-payer, because it just doesn't work when you have brown people, it's a proven fact in Joe Walsh's head. Brown people are probably too busy rioting, killing each other over shoes, and destroying Judeo-Christian values to allow single payer to work.

Yr wonkette is supported by reader donations, and we don't spray spittle anywhere. Unless we're reading the Onion while drinking. Please click the "Donate" clicky below to help us remain spittle-free.