Why Does Trump Always Strangulate His Own Arm In A Torture Watch When He Golfs? 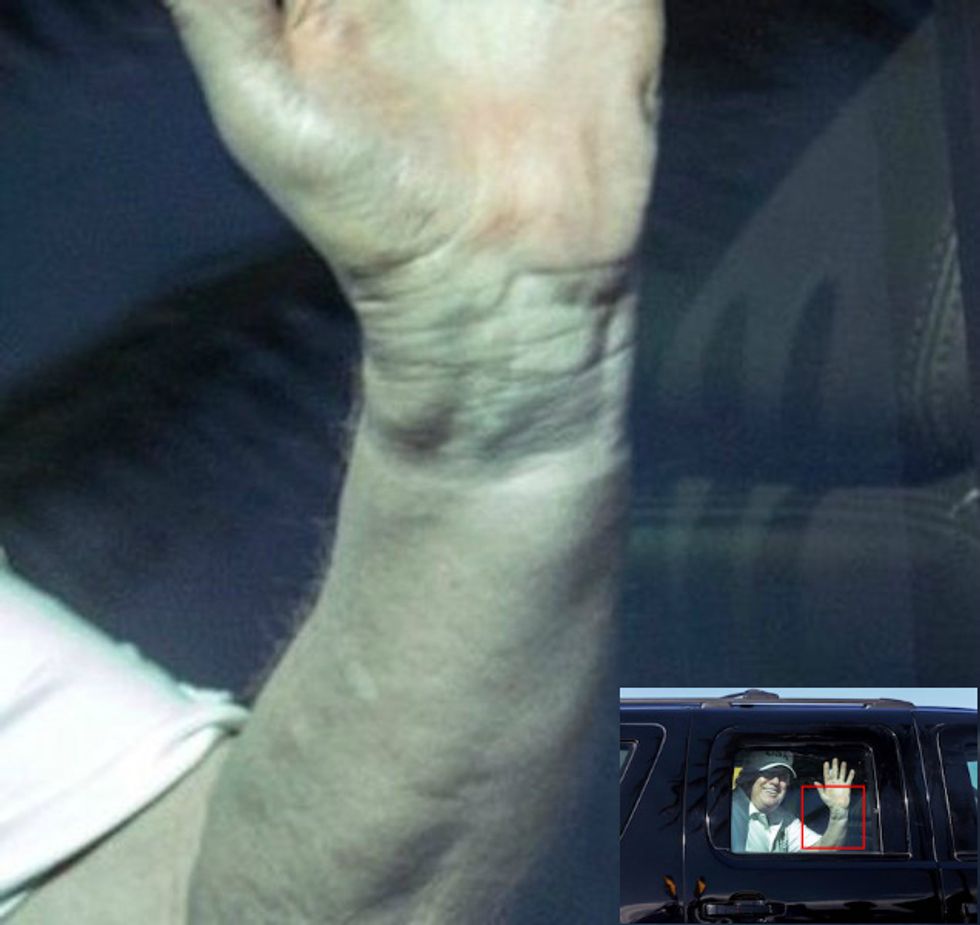 The above photo accompanied a recent article in the New York Times. An eagle-eyed Twitter user noticed that something was "wrong with his wrist!!!!" and commented, "Yuck".

I'll leave it to others to mock Trump's physical properties. Here I'll confine myself to explaining what is wrong with Trump's yucky wrist (really, his arm) and what it suggests about his mind.

Though I can't prove it, my theory is that Trump's arm is squished because he was wearing this watch:

That image is from the summer of 2017, and it clearly shows Trump golfing while wearing a watch that's far too small for his arm.

Google Image search turned up evidence that Trump has worn this specific watch while golfing since at least 2002, and I haven't seen an image of Trump golfing in any other watch, though he has other watches.

I hope someone asks Trump why he always wears a watch that's far too small to encircle his arm without cutting into it disgustingly. Until then, we can only speculate. So let's.

The most obvious theory is that Trump has some superstition about this watch. Maybe he did a good golf thing when wearing it. The academic literature is silent on the question of whether clinging to a superstition that's physically damaging your body indicates that you're mentally dense, but it clearly does.

Maybe he likes pain! Trump seems like the type of person who would have some fairly unremarkable kinks that he's incredibly ashamed of. There's the rumor of the pee tape, remember. This self-mutilation by watch band makes the pee tape more credible. It just does.

HOW DOES HE EVEN PUT IT ON?

This watch looks like he put it on in 1980 and never took it off. But he changes watches! He takes this watch off... and puts it on again.

HOW DOES HIS MIND ALLOW HIM TO PUT IT ON?

Leaving aside the obvious physical challenge of actually putting on this watch, how, mentally, does he do it? What is happening in his mind? There are stories of hikers trapped under rocks and deadfalls cutting off their own limbs to survive. But there are other stories of hikers leaving their pinned limbs intact and dying of exposure, because they couldn't bring themselves to do it.

Trump isn't pinned under anything. He doesn't need to wear this watch to golf. Yet, he does, seemingly every time.

WHY IS HE NOT EMBARRASSED ABOUT HOW GROSS IT LOOKS?

Trump is vain. The most convincing explanation of his hair is that it's a surgically implanted wig. Yet he wears this watch, which makes his arm look fat, swollen, and messed up. Is his superstitious belief in the powers of the watch so strong that it overrides his vanity?

Readers, what questions do YOU have about Trump's self-harming golf torture watch?

Please donate! We are reader-supported. We break the stories that traditional media ignore. The distribution of fluid in the president's arm should NOT be a partisan issue!