Why Is Gabby Giffords So Shrill And Emotional About Guns? 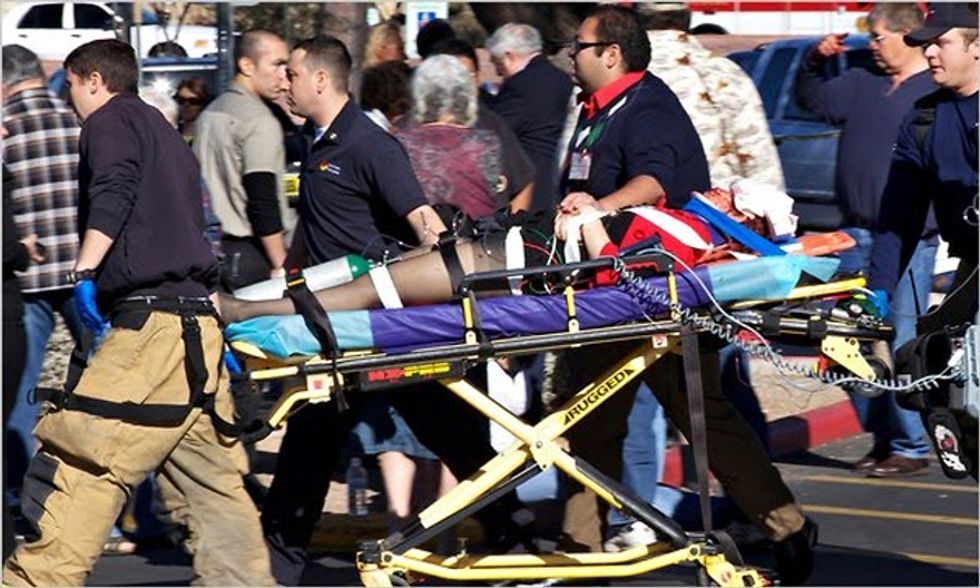 We aren't quite sure we've finished throwing up yet in reaction tothis Politico piece about that mean bitch Gabby Giffords, who has made some very cruel, unfair ads about the issue of gun control for some reason:

Gabby Giffords, irreproachable figure of sympathy, has fashioned an improbable new role for herself this election year: ruthless attack dog.

The former Democratic congresswoman, whose recovery from a gunshot wound to the head captivated the country, has unleashed some of the nastiest ads of the campaign season, going after GOP candidates in Arizona and New Hampshire with attacks even some left-leaning commentators say go too far. And Republicans on the receiving end are largely helpless to hit back, knowing a fight with the much-admired survivor is not one they’re likely to win.

Good lord, what a mean, underhanded thing to do -- suggesting that the availability of guns is somehow a bad thing? And it's especially despicable for her to trade on the fact that everyone knows that she WAS SHOT THROUGH THE HEAD, as if that gave her some sort of special perspective, somehow. Take for instance, this completely unfair attack ad from Giffords' PAC, Americans for Responsible Solutions. It's aimed at Arizona Republican Martha McSally, who's running for Giffords' former seat in Congress. The seat is currently held by former Giffords aide Ron Barber, who was injured in the January 2011 attack on Giffords.

In the ad, a Tucson woman recalls the murder of her husband and daughter by the daughter's unhinged ex-boyfriend, and a voice-over says that Martha McSally “opposes making it harder for stalkers to get a gun.” Which she does. She opposes expanding background checks for gun shows, and that is one place where stalkers can get guns. (We were unable to find information on McSally's position on proposals to restrict gun ownership by misdemeanor stalkers; in general, she tends to oppose any additional restrictions on guns).

The Politico piece paints Giffords as pushing a particularly "emotional" agenda on guns --again, god only knows why:

Giffords’ frustration with Washington’s failure to advance gun control legislation is playing out in her 2014 efforts.

In the days following the December 2012 Newtown, Connecticut, school shooting, where 26 people lost their lives, she testified before Congress, telling senators that “too many children are dying.” On the day the Senate voted down a bill to expand background checks, she stood behind President Barack Obama in the Rose Garden as he told lawmakers their rejection was “shameful.” She would later write that she was “furious” over the vote.

What is with this Gabby Giffords and her emotional reaction to having been shot in the head in an incident that killed six others, including a little girl? It truly is one of the great puzzles of our time.