Why The Fuck Did The State Department Just Ban Putin's Arch-Nemesis From America? 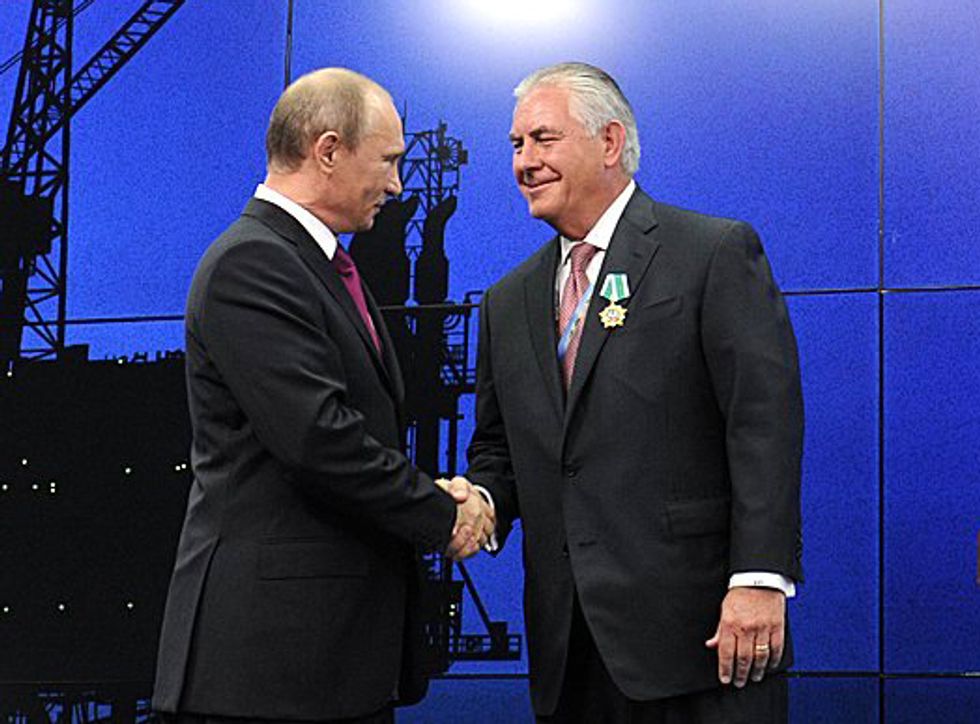 Tillerson didn't get the "Order of Friendship" for nothing.

Bill Browder, he is this guy. Born in America, citizen of the Empire of the Britishes. Also, he was at one time the biggest foreign investor in Russia. Browder's firm, Hermitage Capital Management, uncovered MASSIVE fraud committed by Vladimir Putin and his oligarchs, and Browder and his Russian lawyer Sergei Magnitsky were working to expose the corruption they found. In response, Putin's thugs tortured Magnitsky to death in prison (AHEM "ALLEGEDLY").

Browder testified in July in the Senate Judiciary Committee on the Magnitsky Act, the law passed to punish the very same Russian human rights abusers/oligarchs who committed all the fraud and who murdered (LMAO "ALLEGEDLY") Magnitsky in prison. Browder is basically the reason the law exists, in America, and also in the UK, Estonia and (very recently!) Canada. As ShareBlue's Matthew Chapman notes on Twitter, Putin and his pals have looted zillions of Russian ameros from their own country, and they like to stick that money overseas. ($230 million in this case, which they gave themselves as a "tax refund.") Because of the Magnitsky Act, they can't get to their moneys, which probably means all their Netflix accounts are expired for lack of payment. You can see why Putin would be GRRRRRR and hate Bill Browder and wish he was dead. (Sadly, we mean that literally.)

In response to the Magnitsky Act, Putin banned Americans from adopting BOUNCY RUSSIAN BABIES. Last summer, a clown car full of Russians squeezed into an office in Trump Tower to talk to Donald Trump Jr., Paul Manafort and Jared Kushner about BOUNCY RUSSIAN BABIES, which is code for repealing the Magnitsky Act, which is a big step in repealing all the sanctions currently on Russia. Indeed, one of the many papers Russian lawyer Natalia Veselnitskaya brought to that Trump Tower meeting, along with whatever dirt she allegedly had to share on Hillary Clinton -- "If it's what you say, I LOVE IT," said Junior, about doing anti-Hillary conspiracies with Russia! -- was a fake "report" on why Bill Browder is a big meanie and a liar and the real Zodiac killer. As Natasha Bertrand notes at Business Insider, Russia gave Rep. Dana Rohrabacher (R-Kremlin) a very similar memo during one of his traitor trips to Russia.

So anyway, Rex Tillerson's State Department just revoked Browder's visa, and they weirdly did it the same day the Kremlin notified Interpol that it was very angry with Browder and wanted him picked up.

Interpol told Putin to fuck off the first four times he tried this, because Putin is a trifling dick, but we guess the fifth time is the charm! (Actually, Russia used a loophole to get Browder on Interpol's list. Don't feel like typing it all out, just click here for a sexplanation.)

And why does Russia want Browder arrested? Oh, because now they say BILL BROWDER and an MI6 agent killed Sergei Magnitsky in the Russian prison controlled by Putin's thugs. Likely story! The real reason is because Putin hates Bill Browder for exposing him for the fraud he is, and the Magnitsky Act is one of the few things that really does hurt him and his regime.

Is this all weird and bad and fucked up? Yes, it is! Is the world terrible right now? Sure thing! WHY THE FUCK IS REX TILLERSON'S STATE DEPARTMENT SIGNING ON TO VLADIMIR PUTIN'S GLOBAL VENDETTA AGAINST BILL BROWDER? Oh, maybe it's just that little thing about how Donald Trump is a Russian intelligence asset. (GIGGLES "ALLEGEDLY.")

What? Trump isn't enforcing the new Russian sanctions bill Congress passed, either. That would make tears come out of Putin's cry hole!

For more on how horrifying this is, please read this full thread from Matthew Chapman at ShareBlue. He notes that "restricting [Browder's] movement" is a good way for Putin to track the guy and kill him, not that Putin would ever have anybody killed for political reasons.

Maybe the State Department just did a boner by revoking Browder's visa. ("Boner" is an old-timey word for "mistake.") If so, they need to rectify it immediately.

Or maybe State meant to do this, and goddamn us patriots for noticing.

Is this what America being great again feels like?