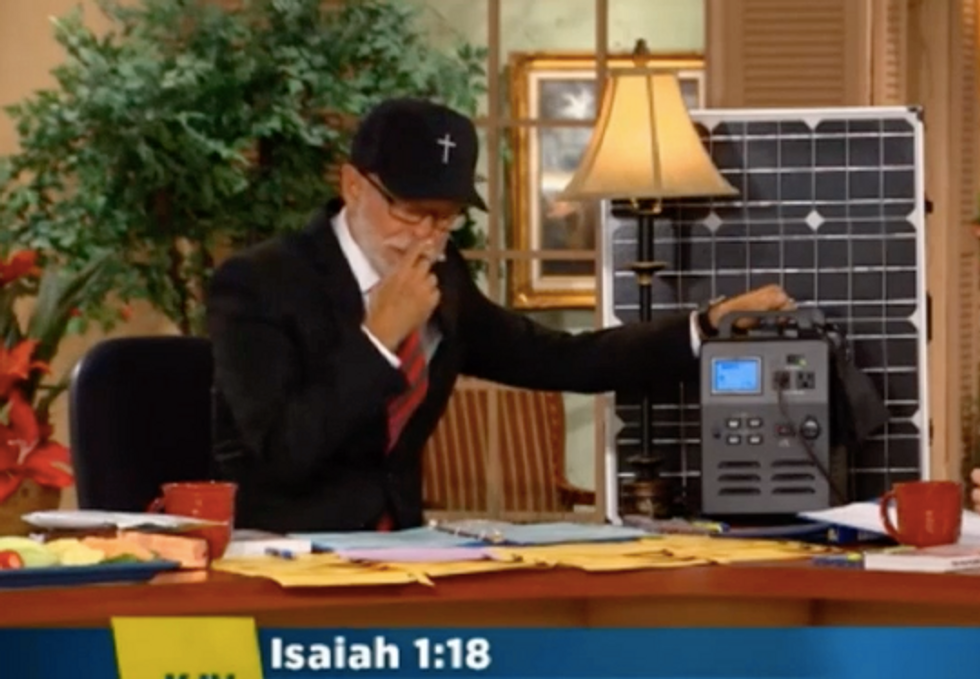 Televangelist Jim Bakker could not be more excited about the prospect of a Donald Trump presidency! Almost as excited as he is about his Mexican Fiesta Food Buckets, even! They have so much in common, you know? They've both defrauded a heck of a lot of people (though only Jimmy went to jail for it!), they're both accused rapists and confirmed adulterers, and they are both unusually fond of wearing baseball caps with suits.

Jim Bakker's friend, Michael Snyder, is also very excited about a Donald Trump presidency! Oh, how fun it would be! HOWEVER! The two good buddies are also very worried about all these un-American types who hate Donald Trump and also FREEDOM and probably KITTENS and PUPPIES, who may get together and do a false flag attack and establish martial law just to prevent Donald Trump from being president. Gasp!

Bakker explained there was a possibility there may not even be an election, stating that “There’s going to be a martial law declared," and that some people have actually prophesied that! Because we all know how well "prophecies" always work out. Oh, by the way, you know who was an actual prophet? Ronald Reagan! Yes, according to Jim Bakker, in this clip, Ronald Reagan became an actual prophet the day he interviewed him back in 1979! Unfortunately, Ronnie was not a good enough prophet to warn his good buddy Jim Bakker that he should probably be way more careful when stealing money! Not even a good enough prophet to see John Hinckley coming! That is some bad propheting, right there, I will tell you that much.

Michael Snyder, of course, agreed that this sure was a thing that could happen, and that the "elites" would for sure do a false flag attack in order to establish said martial law! Even if they had to die to do it! We assume that by "elites" he is referring to the lizard people, obviously. Usually they are the ones in charge of such things.

Then, Jim Bakker was like "TELL ME ABOUT IT, I KNOW ALLLLL ABOUT THE FALSE FLAG ATTACKS." because, he says, "someone" once tried to false flag kill him at Morningside, the church/retirement home he does not technically own due to still owing the government like $6 million in back taxes. I tried to look this up, but somehow there is no record of it on the internets! Probably ALSO some kind of conspiracy!

Normally, we would brush these concerns aside as the rantings of mad men. However, Jim Bakker does know a thing or two about conspiracies, as he actually went to prison for conspiracy himself. In addition to all the fraud! SO SAD!

UNRELATED, you should definitely consider purchasing some of his food buckets, because he is pretty sure a "thing" is going to happen and you will need them SOON. And also donate to one of his many foundations, in case that "thing" is him needing to pay off another lady he either raped (allegedly!) or committed adultery with!