Will The Real First Lady Please Show Up? 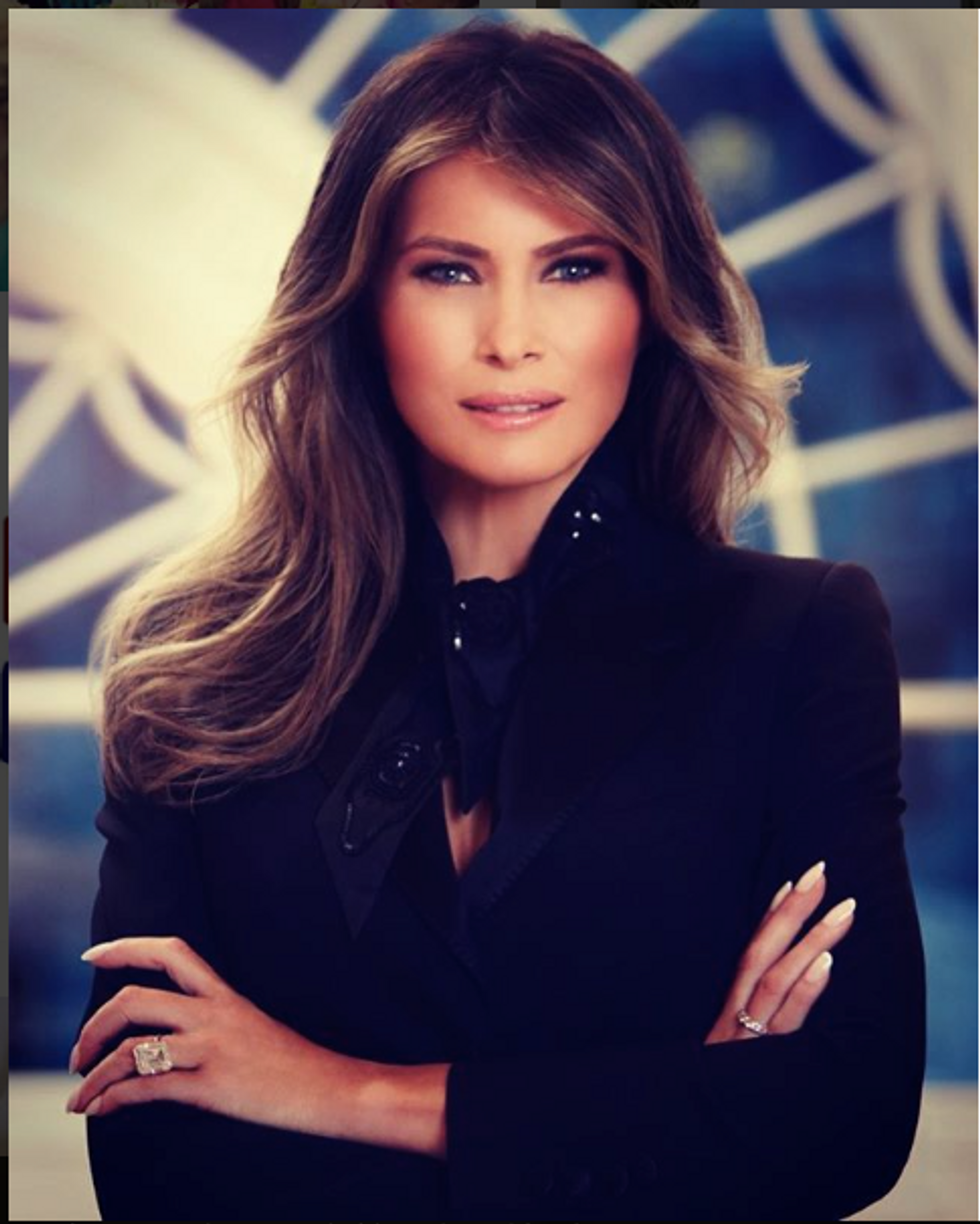 The First Lady strikes a pose

Melania Trump (remember her?) is back! The First Lady, a nifty title until you realize it means you're married to this guy, is scheduled to make her first -- discounting spectral sightings in White House windows -- public appearance in weeks today.

The first lady's appearance at the 5:30 p.m. reception will be her first in an official event since she joined President Trump, Vice President Mike Pence and second lady Karen Pence in greeting three Americans formerly imprisoned in North Korea in the early morning hours of May 10. Four days later, it was announced that she was hospitalized at Walter Reed Medical Center to treat a "benign kidney condition." She was released from the hospital five days later.

Melania Trump's absence has been the subject of media speculation and even a bevy of online conspiracy theories.

My favorite of the conspiracy theories, which I started just now, is that Melanie herself was traded for the American prisoners in a comical mixup stemming from Trump's insistence on negotiating with North Korea without a translator present or someone actually good at making deals.

I also appreciate the Trump administration's use of an alternative calendar to make up for the unusual fact that the First Lady skipped the actual Memorial Day, which was actually last week. It reminds me of the "fake party" episode every sitcom eventually does because 22 episodes a season is really hard.

The meddlesome press isn't invited to the Fake Memorial Day Event, so no one can actually attest to whether it's really the First Lady or just Jared Kushner in a wig and Manolo Blahnik hurricane-ready pumps.

Look, Melania should take all the time she needs to recover from her "benign kidney" condition -- a diagnosis I have no reason to doubt because no one in the Trump White House has ever lied to me. But they could at least try to not have official statements released from her that are covered in Trump's crayon-stained fingers.

I see the media is working overtime speculating where I am & what I'm doing. Rest assured, I'm here at the @WhiteHouse w my family, feeling great, & working hard on behalf of children & the American people!

I can sympathize with the Part Time First Lady's dilemma. All evidence demonstrates that Melania Trump hates her sort-of job, which involves doing things and visiting disaster zones that have no turndown service. It's possible Trump didn't really consult his wife over his life-altering and cosmos-imploding decision to run for president. She likely wasn't even fully briefed on it until the day of her Republican National Convention speech, which explains why she put so much time and effort into just borrowing from Michelle Obama (this would become a habit). Worse, let's hypothetically say your plan was to marry a repugnant walking sack of repugnancy so you can suffocate him in his sleep after convincing him to cut off everyone in his will (except Ivanka, you'd had to split everything with Ivanka). That's pretty straightforward when your husband is the host of Celebrity Apprentice. They'd just send one cop over as a formality. You could cry your way through that. But now he's the president. There are secret service agents everywhere. He can't just disappear. But maybe you can.

The First Lady has declined to attend the G7 summit next week, where she would've hung out with other first spouses. She's also ghosting on an upcoming meeting with North Korea. This is a sharp change from her predecessor, whose whereabouts were closely scrutinized like a black woman shopping at the mall. She was practically charged with welfare fraud for daring to take vacations or wear clothes not designed by Costco. But let's just give Melanie a break. She probably intended for "Be Best" to be "prescriptive" and not "descriptive."