Wingnut Columnist: Neil DeGrasse Tyson Is A Bad Scientist, Could Someone Please Kill Him? 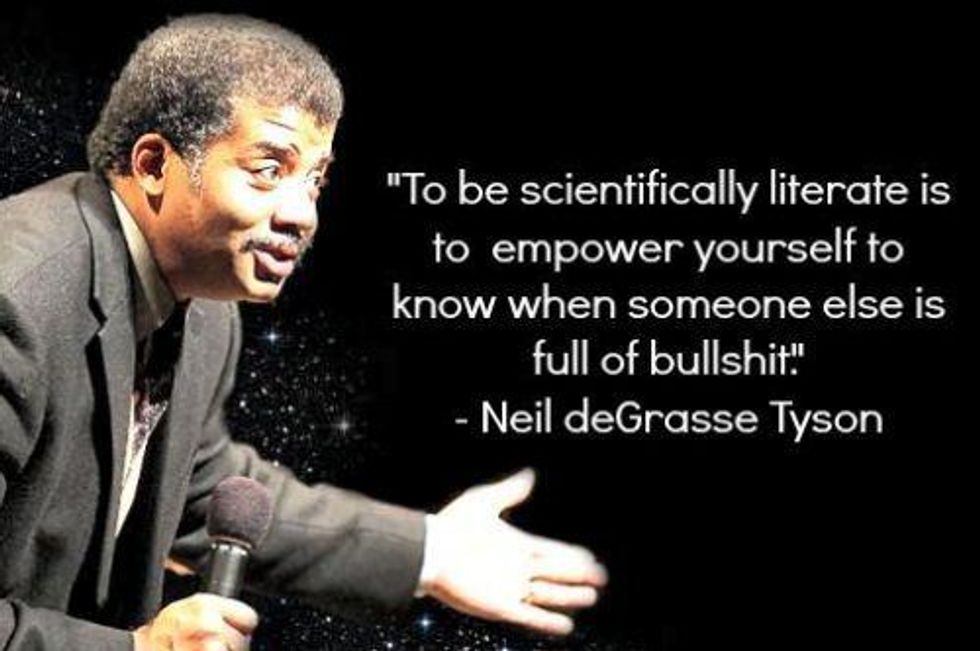 WordNetDaily columnist Erik "The Other Rush" Rush -- he really calls himself that -- would like to share with you some Thoughts About Science, which mostly boil down to: science is nice when it gives us flatscreen TVs and atomic bombs, but we'd better not trust the "scientific community" because it's full of atheists and socialists who are trying to set themselves up as some kinds of authorities on stuff that they have no business talking about, like the age of the Earth, how life came to be on Earth and whether it's getting hotter, none of which they really know a damn thing about. And by the end of his meditations on science, he actually appears to say it would be OK to kill a few scientists, if that's what's necessary to preserve Liberty.

Modern scientists, Rush says, are a heck of a lot like the Pharisees back in Bible Times:

Arrogant, corrupt and self-righteous beyond description, these elitist clerics believed that since they were the earthly representatives of God according to Mosaic law, this made them above suspicion and beyond reproach.

This supposed infallibility is precisely what we observe in the deportment of numerous scientists. With regard to theories they espouse, these are often presented as incontrovertible fact, though they’ve been tainted by ideology, money, or they’re simply fallacious.

And one of the worstest of all these Science Pharisees, Rush says, is Neil deGrasse Tyson who is one dangerous guy, because not only is Tyson affable and funny, he "also happens to be black, which, if you hadn’t noticed, can be advantageous if you’re trying to get millions of white people to do something."

Erik Rush, we should note, happens to be black, but ever since he wrote several columns a couple years back pushing the notion that Barack Obama tried nuke America, because he is just that evil (and also to further enrich George Soros in the resulting collapse of civilization), Rush has not been invited back to Fox News, where he used to be able to get millions of white people to listen to him. For some reason, we've never seen him called affable or funny (at least not intentionally).

What's so terrible about Neil deGrasse Tyson, you might wonder? Well, for one thing, he is a science-hating bully who says, according to Rush:

[J]ournalists ought not question the conclusions of climate change scientists – in fact, he maintains that they should refrain from even reporting on any other theories than the anthropogenic (human-caused) climate change model.

Rush also pretends that he had always thought Tyson was a pretty cool guy as long as he only talked about astrophysics, until "discovering that he was just another over-educated shill for global socialism." You see, Rush says, he was a big big fan of Carl Sagan's version of Cosmos, but sadly, Tyson's reboot of the series just plain RUINED all the science by dragging in a whole lot of leftist politics and atheism. (And if Erik Rush thinks Carl Sagan's Cosmos was apolitical, then that's all the proof you need that he never watched the damned thing.) Where Sagan was more worried that we'd nuke ourselves into extinction, Tyson's version focused on our current penchant for making the planet unlivable through global warming -- a concern that Sagan also shared in the 1990 re-release of Cosmos.

Suffice it to say, the new version of Cosmos didn't live up to Rush's imaginary memories of the original, which he definitely never watched or he'd be complaining that Tyson is too much like that commie Sagan:

Sadly, I found the offering far too tainted with unsubtle theory-presented-as-fact and poorly-nuanced intimation to view more than a couple of installments. As deGrasse Tyson illustrated the marvels of space and time, one could almost hear what was between the scripted lines:

By the way, did I mention that there is no God, and we come from monkeys?

Oh, and did you know that religion is for Neolithic cave people and the inherently feeble-minded?

Not that Sagan ever mentioned evolution, nosiree.

Also, too, Erik Rush has discovered an indisputable fact that completely disqualifies Neil deGrasse Tyson from ever speaking again of this "global warming" nonsense: Tyson "holds no credentials in the field of climate science." It's true! The man is a complete amateur! OK, sure, maybe he knows a thing or two about the atmosphere of Venus, which is what you get with a runaway greenhouse effect, but no, Tyson does not have a single degree in climate science. Not that Rush trusts people who do have degrees in climate science, who are all simply out to get big research grants anyway, but that's Erik Rush on a day when he's not talking about Neil deGrasse Tyson.

You see, it's all just a big power grab:

[C]limate change policy has done far more toward redistributing wealth and consolidating the left’s political power worldwide than it has done in preserving global climatic conditions -- assuming that is even possible via human intervention.

This is a pretty impressive pronouncement from someone who somehow feels qualified to speak of such things despite having no credentials in science, economics, or, for all we know, wiping his own ass without leaving a skidmark. But it's true: climate science hasn't stopped climate change for some reason, so the science must be bad. Oh the science is bad, says Rush, since "many of the core studies upon which the anthropogenic climate change model is based were found to have been manipulated and agenda-driven -- in short, fudged for reasons of political ideology." He knows this from having read WND.

Also, too, Erik Rush found out that Neil is a Red Diaper Baby, and therefore not to be trusted, probably unto the seventh generation. You see, it's just commies all the way down the line in the Tyson family:

[H]is father, Cyril deGrasse Tyson, was an academic and radical activist. Despite material success, and having been able to situate his family in the upscale enclave of Riverdale in the Bronx (in the 1950s no less, when even in liberal New York City, whites would rally to keep blacks out of such places), Cyril was working toward the inculcation of leftism in mainstream academia.

That's some pretty good hominem-adding right there: Don't trust what this guy says about science, because his father was a leftist. So, to sum up: We can't trust Tyson because he doesn't have a degree in climate science, and we can't trust climate scientists because they all faked their data. Plus commies.

Finally, Erik Rush seems to suggest that it would be a good idea to silence Tyson and other fake scientists, by whatever means necessary. Remember, this is the guy who once called for executing journalists to celebrate Free Speech Week. After all, the First Amendment does not protect treason:

When people argue for the right to free speech of those who espouse progressivism, socialism, or even communism, it is based on a popular but erroneous construal of the First Amendment. This maintains that they have the right or freedom to believe what they like.

However, the actions of those who espouse progressivism, socialism and communism have long since strayed into the realm of conspiring to strip those very rights and freedoms from others. This they have no right nor freedom to do, in either the legal or the moral sense.

In light of this, those whom they would victimize in this way should consider no course of action off limits in preventing their victimization. [emphasis added]

He really is saying that Patriots need to silence Neil deGrasse Tyson and anyone else who thinks climate change is real, and if that includes murder, then OK, sure, if that's what's necessary to stop tyranny. Or maybe he's just calling for a boycott of something. That has to be it. If you love freedom, do something, like not watching Tyson's new show on the National Geographic  cable channel, and maybe killing him.