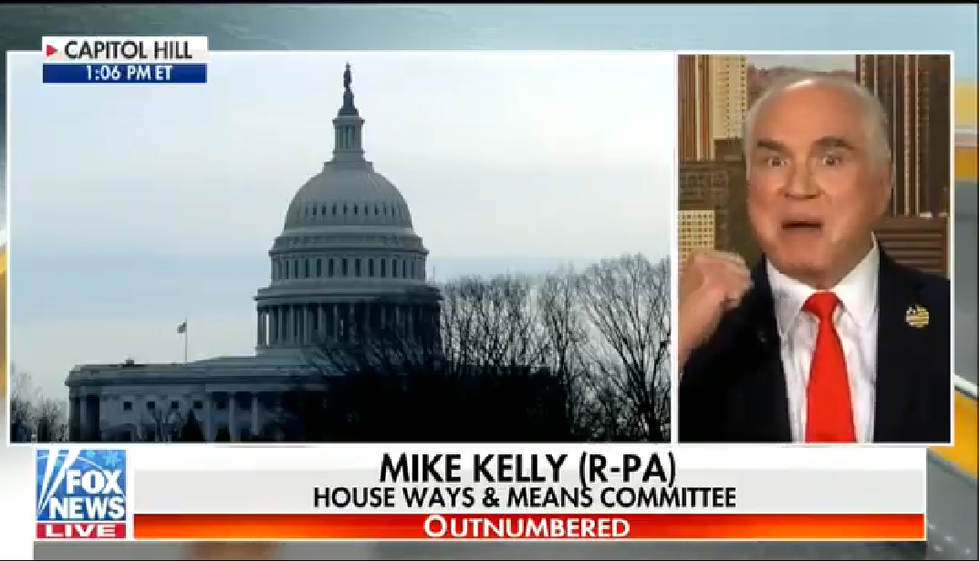 Here is a guy who is going to have a Merry Holiday! Excuse us, CHRISTMAS, A MERRY FUCKING GODDAMNED CHRISTMAS is what he is going to have, because Donald Trump has rescinded the Obama-era regulation that banned Christmas. It is Pennsylvania GOP Rep. Mike Kelly, and he has decked his balls with holly and he's making out with a Trump-flavored buttplug under the mistletoe, all because of Trump! Yes, indeedy, Kelly told Fox News Trump TV that Trump has made America so great again that this Christmas, people in Pittsburgh are DING DONG MERRILY ON HIGH about Trump, fully "erect" now that we have a REAL president.

Catch this man's joy and try not to choke on it:

I will tell you what.

And so if you’re not on the Trump train, you get on the train or get off the tracks. You’re gonna get run over.

35% approval rating! One legislative accomplishment this whole year, and it was a shitty one that Americans hate! FEEL THE TRUMPMENTUM!

Look, the House had done its work in the appropriations. We had our 12 bills ready to go. Unfortunately it didn’t get through the Senate. But the big news — the big news is for America, you look at today, and I can tell you walking around the streets of Pittsburgh, people walking more erect ...

Tell us more about the erections of Pittsburgh, crazy man!

Pittsburgh will #NeverForget the dark ages of tribulation, when saying "Merry Christmas" above a certain decibel level was sure to land you a night in the slammer. These days, they say HEY, MERRY CHRISTMAS, and they are ERECT WHILE DOING IT.

How does one "bump sunshine"? Is it something erect Pittsburghers do? Does it hurt?

I am telling you, this is a different country. In 11 months, this president has changed the entire complexion of our entire country ...

Yeah buddy. Our place in the world sure has changed. Hey, did y'all hear UN Ambassador Nikki Haley is throwing a special slumber party but ONLY for the countries that didn't tell us to fuck off with our Jerusalem declaration, which sounds no fun because pretty much ALL THE COUNTRIES told us to fuck off? Have fun staying up late and eating pizza with Palau and the Marshall Islands, Nikki Haley. Real Coalition Of The Willing you got there.

We are no longer leading from behind, we are leading from the front and everybody else is looking to us and saying ‘go, go, go.’

Pew Research looked at global opinion of Donald Trump and this is what it found about different countries and their confidence Donald Trump will do "the right thing":

Ouch. (We are sorry, world! Most of us in America are still good and kind and wonderful and DIDN'T VOTE FOR THAT MOTHERFUCKER and DON'T WORRY, WE ARE WORKING ON GETTING A BETTER CONGRESS ELECTED NEXT YEAR, and also if any of your intelligence agencies are sitting on nasty dirt on Trump, we wouldn't get upset if it somehow leaked out.)

Well, folks, that's the end of Congressman Mike Kelly's rant. We hope it boned you up right nice in the Christmas cheer department.

No? Oh well, guess you'll just have to start drinking instead.

Speaking of, this is your open thread, so we'll see ya wouldn't wanna be ya hope Santa treats you right, WONKETTE OUT!