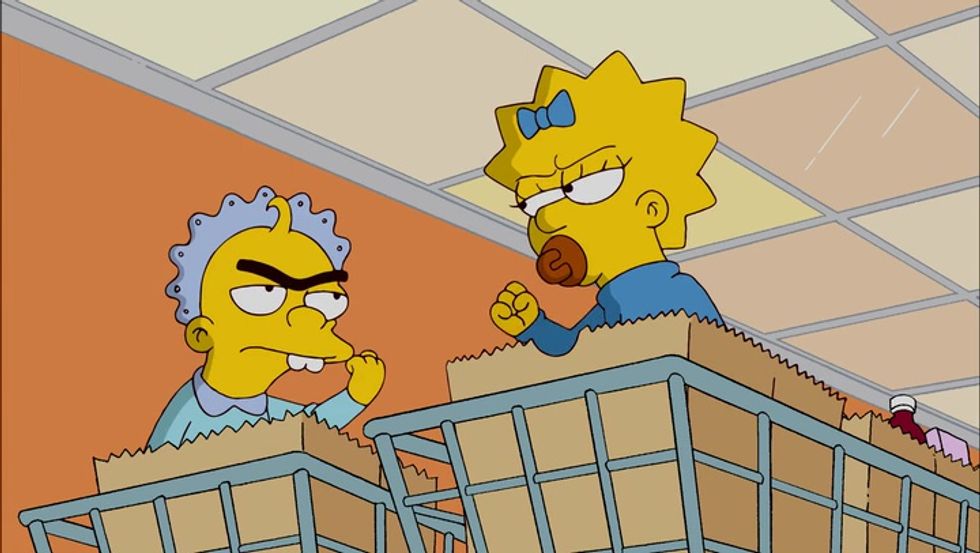 So this conservative millennial lady who writes for the National Review picked a fight with this conservative boomer fart guy who "reports" for Fox Business Network, about which of their generations are worse. And we are really struggling because who should we root for? Hahah, trick question, we hope they both lose. Let's see if we get our wish!

Jillian Melchior, in addition to writing for the National Review, is also a fellow at the Independent Women's Forum, one of those conservative groups that tell women real feminists love the free market, hate Democrats, and should just get married and shut the hell up. So yes, obviously, she is terrible.

Then there's this guy, Charlie Gasparino, and he's a senior correspondent for Fox Business Network, and he thinks Marco Rubio should be president because Rubio is "a free-market person," so ’nough said, right?

Apparently, Gasparino talks a lot on TV about how millennials are The Worst, and we don't blame him. They are, except for hipsters, who are even worse, because millennials can grow up one day, but hipsters choose to be doucheholes regardless of when they were born, and shit Jesus, stop ironically drinking bad beer and wearing dumb clothes that don't fit, you look like assholes.

So Melchior wrote a pile of words, for the New York Post, about SHUT UP, millennials are not The Worst. And you suck, Charlie Gasparino, and Obamacare sucks too, because millennials should have the freedom to die from treatable diseases if they want to, without having to subsidize dumb old people like you, Charlie Gasparino, YOU SUCK. Oh, and Michelle Obama sucks too because -- honestly, this might be our favorite part -- she "has even used millennial-bashing to try to bully us into signing up for this bum deal." Boo fucking hoo, you poor fucking bashed-and-bullied baby, why don't you and the Fox boomer go on Fox and have it out, once and for all?

So they did. On another Fox Business show, these two assholes sat down with Neil Cavuto to talk about how they are all assholes.

Melchior says Gasparino is "not only a whiner" but also from "the generation of moochers" because millennials are paying for his Social Security and old-guy boner pills under evil Obamacare:

This is something that millennials are picking up the tab for your generation, so I just don't have a lot of patience for you coming on TV and saying that we're moochers. I just don't think the facts back that up.

Then the two old guys laugh in her general direction, and Cavuto says, "Oh no she di'int," which he should NEVER say again, and then it is Gasparino's turn:

She seems like a very nice young lady, and I would just say that you know we have to look at -- yes. Boomers are in charge, and they're doing a lot of bad things, but look who's helping them, who's putting the certain boomers in charge? It is the millennials who want freebies.

Gasparino says the country is all effed up because Melchior and her "buddies" elected the wrong kind of boomer president, who wants to give everyone free birth control and college, which is what broke the economy just now. And then they both accuse each other of being part of a "coalition" that is destroying America, and they're both right about that, but it's not generational: it's because they are conservatives who think the real problem is Obamacare, and President Rubio or some other Republican moron could fix all that with free-market magic.

Then they exchange some lame insults that would make a 12-year-old feel sorry for them, and he says her column was "derivative," and she tells him, "I don't think you're a nice man, and I'm looking forward to writing your obituary." That's no way to show respect for your elders, young lady! But he doesn't care, he just laughs harder and tells her, “I take pride in not being a nice guy. I'm a jerk -- read my Playboy interview!" We did read his Playboy interview -- that's how learned he's a Rubio fanboy -- and yup, he sure IS a jerk. But Melchior is apparently not that kind of girl, because she says she doesn't want to read it and adds, "Nobody reads that." Yes we do, Melchior, but only for the articles.