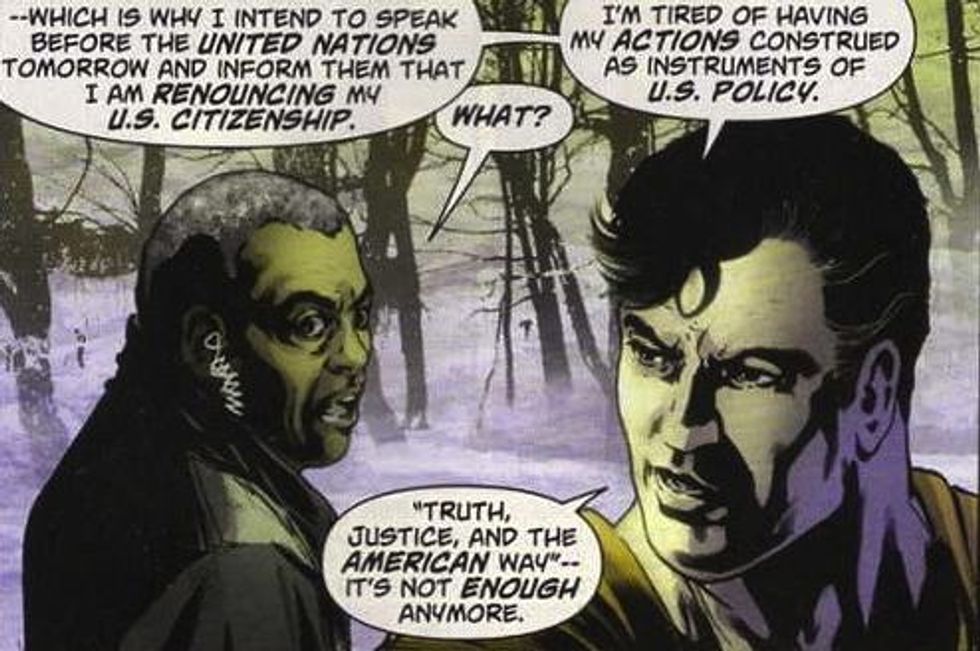 When even the nation's beloved cartoon superheroes are saying"Eh, fuck this place and your loser god," your country might be on the "wrong track."

So here's mythical metrosexual King of America and lamestream media reporter Clark "Superman" Kent pledging to join the U.N. or something. Teabaggers will be very upset! Even though the only comics they read are "Mallard Filmore" and those emailed pictures of the Obama Chimp Family picking watermelons outside the White House.

Will that stop teabaggers and Palin slobs from "boycotting" something they don't read and would never purchase. Of course not, c'mon, are you new around here? Behold the stupid:

Bleep Superman. I urge a boycott of Warner Brothers, all DC franchises, and particularly Superman. They intended this to be a political statement, but it is really a slap in the face of the American identity. Show me any one country that has done more for the world than America. We have fought for more people and sacrificed more treasure than any other country in history.

Great point! And we're still remembered really fondly for all we've done in Vietnam, Cambodia, Laos, El Salvador, Guatemala, Cuba, Panama, Japan, Afghanistan, the Koreas, the Philippines, Iran, Iraq, Lebanon, South Africa, Colombia, Chile and a bunch of other countries we can't think of right now, because we're not looking at any random spot on a globe.

This better be some one shot crap shoot or everyone will need to get to work on boycotting DC Comics and the new Superman movie. I am getting tired of these leftist writers taking characters to push their own twisted agenda on the guise of some greater cause.