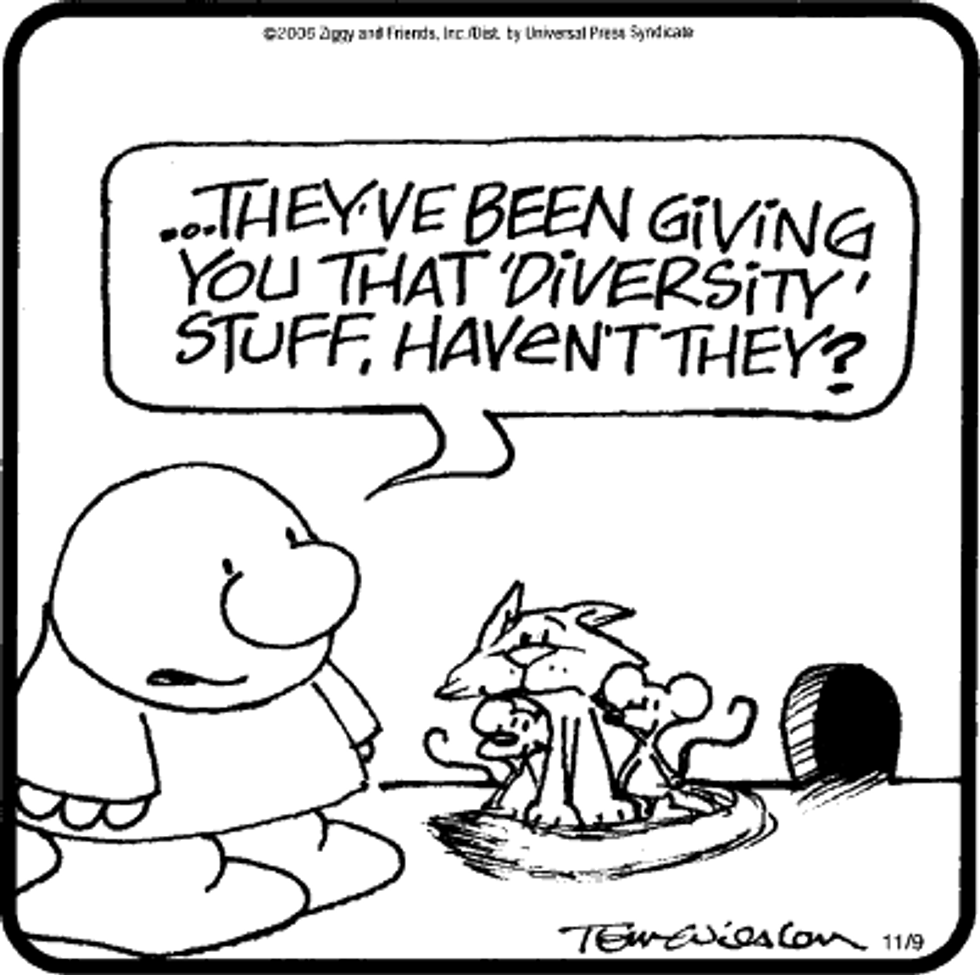 You know what we don't have enough of in our great modern American U.S. society of today? FEAR. Not only is Sesame Street indoctrinating children with the dangerous notion that they shouldn't fear monsters, the poor dears are also being told, over and over again, that they have to "get along" with "others." Well by golly, Rev. Michael P. Orsi has had about as much of this nonsense as he can take (we think maybe he saw a white dude holding hands with an Ay-rab dude, or maybe it was a Messican, who can tell?), and he wants to set us straight (no pun intended) about a thing or three:

There are three dirty words that are being used to subvert traditional morality in Western society: tolerance, diversity and welcoming.

These words are liberally used (no pun intended) in education, by the media, and even by our Churches. In themselves, they seem quite innocuous. To the untrained ear they sound like commendable practices geared toward helping folks who are “different” get along.

The fact of the matter is that these words are being used to lull us into an amoral complacency. They are being used as the vanguard for conditioning unsuspecting minds in the regnant Philosophy of Relativism.

Traditional morality and ethics depends on religion, custom, tradition and a sense of revulsion. Obviously, the three dirty words allow for no such standards or restrictions.

Yes, he went there. There can be no morality without a very highly developed "sense of revulsion." In fact, reading Rev. Orsi's column, we find ourselves feeling very, very "moral." (BOOM!)

He then carefully unpacks what each of these terrible concepts entails:

Tolerance: This word implies that, at worst, there is no measurable standard for right or wrong, or at best that we have no right or obligation to correct those in error.

Tolerance does not connote the virtue “patience,” which must be exercised in leading a person to the truth or, for example, a child to good behavior.

Oh! We KNOW this one! We wrote a whole bigass paper on tolerance for a political science class our very first semester in grad school, and it had footnotes and everything, AND it got an "A," so we feel quite confident in proclaiming Rev. Orsi a big doodyhead on this matter. Tolerance is not utter relativism. Tolerance is a conscious political choice to put up with ideas we disagree with, or even abhor, for the greater good of another value you teabagging morons claim to like, "Liberty." It's the alpha and the omega of why the ACLU goes to court to protect the free speech of Nazis, the Westboro Baptist Church, and idiots like the Rev. Michael Orsi, who worries that "acceptance of the oxymoron 'same sex marriage'" will somehow restrict freedom rather than expanding it:

Viewed in this light, “tolerance” is not virtuous. It blinds people to time-tested truth, cows people to silence or acceptance of that which they know is wrong. It is, ultimately, a politically correct way to effectively subvert freedom of speech.

Yes. Allowing someone else to believe wrong things is totally an infringement of your freedom, dude.

Diversity: This is the mantra of those who desire no unifying truth. The diversity crowd has taken over the academy.

There was a time when unity was celebrated. It stemmed from a belief in one God who revealed certain truths by which human beings were called to live. The most obvious expression of this was expressed in The Ten Commandments. For Americans, the Declaration of Independence and the Constitution were designed for “E Pluribus Unam” [sic] (one from many).

Yeah, but then a bunch of filthy foreigns and negroidals started insisting on being considered part of the "many," right? And that's when things went downhill. Yeah, we've heard that song before, buddy, since the earliest days of the Republic. Yes, yes, we know -- all those old prejudices were about ethnicities, but what you're afraid of is P-E-N-I-S in the anus, which is totally different, somehow, because it's about genitals, which you somehow just can't stop thinking about.

Diversity usually begins in education with innocuous events like sponsoring a banquet with foods from different ethnic groups or instructing young people about various cultures. The indoctrination process moves from appreciating the lasagna, egg rolls, knishes and sushi, of diverse cultures to the surreptitious promotion of alternate life-styles which is code for “each to his own taste” in behavior.

Yes, that's how it starts: "Here, Suzie, have some of this 'Matzo'... made with the blood of Christian infants!" And then before you know it, nice white girls are making the beast with two backs with thuggish blackamoors, and you can't tell the boys from the girls as they gyrate to the wild jungle rhythms of the rock and the roll!

The next step is to promote “pride” in any group one chooses to belong to, even if their preference contradicts traditional ethics, morality and good taste. While one’s taste in food is neutral in itself, barring, of course, cannibalism, (for now, anyway) how one behaves has grave social consequences. LGBT (Lesbian, Gay, Bisexual, Transgender) pride is a prime example. Diversity, not right or wrong, is the new standard that is celebrated as a virtue. The chaos that ensues from diversity is destructive to good order in society

Yeah, we had a feeling that it was all headed toward your obsession with assfucking. OK, so let's see if mybe the last bad word, "welcoming" is also about fear of buttsex...

Welcoming: This is a code word for “anything goes here.” It is now commonly used to indicate that whoever you are, whatever you believe, and whatever you do will not be challenged here....

Most people belong to groups to help them improve, change and be part of something greater than themselves. “Welcoming” shuns all of this since it encourages people to wallow in their smallness, to remain truculent when in error, and for those involved with religion to deny the need for redemption.

Yeah, screw it, it's just a bunch more paragraphs about how homosex is going to lead to cannibalism, destroy civilization, and frighten the horses. And people who talk about tolerance, diversity and welcoming are really intolerant because they don't welcome people whose traditional morality leads them to hate the ghey. Thing is, Orsi isn't looking for "tolerance." He's looking for "agreement." And frankly, we like our dirty words a lot better than his.