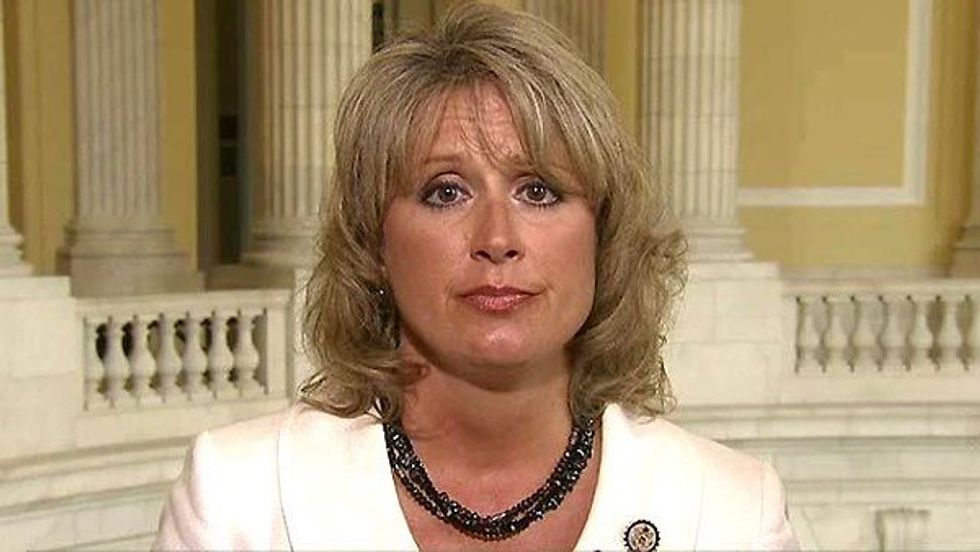 Aww, it's time to play the sad-goodbye music for North Carolina wingnut Rep. Renee Ellmers, who won the distinction Tuesday of being the very first GOP incumbent in 2016 to get primaried right out of Congress. Oh, yes, she was also the first congressional candidate to get an official endorsement from Donald Trump this year, although NBC says Ellmers "was viewed as an underdog long before Trump's involvement in the race," so that's something Trump can feel better about. This election is all about Donald Trump's feelings, right?

Ellmers lost to Rep. George Holding, a fellow member of Congress who decided to go after Ellmers's district after it was redrawn. Holding had represented the 13th District, but after court-mandated redistricting, he decided his chances were better in the 2nd District. Turns out he was right:

Holding won with over 53 percent of the vote with 96 percent of precincts reporting, according to the Associated Press. Ellmers was barely clinging to second place ahead of Greg Brannon, edging him by little more than 200 votes.

Ellmers was one of those raving Tea party loonies who made it into Congress in 2010, complete with this wonderfully paranoid TV ad against an opponent she fretted would support Barack Obama's plans for a "Victory mosque" at Ground Zero:

Like any good wingnut, Ellmers was loudly pro-gun, although a few nattering nabobs of negativism chided her for not doing Gun Safety so good in 2013, when she reported the theft of her son's AR-15 from the garage of their home. He'd left it in their unlocked garage after a session of target shooting. But hey, they own a gun safe -- they left the semiautomatic rifle leaning up against it and went into the house, and then some clever bad person stole it.

Ellmers first really came to Yr Wonkette's attention a bit earlier that year, when in the midst of the government shutdown, she patiently explained that, unlike all the unimportant government workers put out of work by the shutdown caused by her fellow House members, she really liked getting a paycheck on the regular:

I need my paycheck. That’s the bottom line ... I understand that there may be some other members who are deferring their paychecks, and I think that’s admirable. I’m not in that position.

Lots of criticism followed, and Ellmers reluctantly agreed to have her pay deferred, though of course she got it all back at the end of the shutdown. And unlike some other members of Congress like Sen Al Franken, no, she did not donate her pay during the shutdown to a food bank, because why would you help out greedy takers who have Obamaphones?

It Turns Out We Weren't Kidding About Kevin McCarthy's Sex Scandal. Huh!

Then of course, there were the rumors that Ellmers, a married woman with a family values agenda, was maybe boning House Majority Leader Kevin McCarthy, though of course such a thing would be unthinkable for two conservative family-values Republicans who support traditional marriage and also family values.

Despite starting out as a tea party wackjob, Ellmers came to be seen by frothing anti-government wingnuts as too friendly to Big Gummint, even though Sarah Palin herself used to call her a fellow "mama grizzly." But then Ellmers went and voted for insane things like keeping the government functioning, and she was perceived as not hating John Boehner, so good patriotic grassroots groups like the Koch brothers' Americans For Prosperity poured tons of money into ads against her.

Still, Ellmers was a class act all the way: On election day, she was caught on video mocking a fellow Republican lady's weight:

As she went to vote, Ellmers greeted former former Harnett County Republican chair Maggie Sandrock by name, noted Sandrock had "gained some weight," and added, “You’re eating a little bit too much pork barbecue. Whoo!” Such a charmer! Sandrock had previously worked on two of Ellmers's campaigns, but this year was supporting George Holding, so obviously it was OK to call her a big ol' porker. Looks like Donald Trump knows how to find like-minded people!

After news broke that Ellmers had been turfed out, former American Idol dude Clay Aiken, who ran unsuccessfully against Ellmers in 2014, posted a not-at-all catty farewell to the Twitters, saying, "It's official! Goodbye @RepReneeEllmers You won't be missed."

We're going to miss you, Renee Ellmers, especially your crazy-eyed visits to cable TV. Go ahead and indulge in some pork barbeque if it helps you get over the sting. Maybe now you'll have time to go find your stolen gun!