Wingnut Truckers Will 'Shut Down America' In Order To Save It From Corruption, Obama's 'Fuel Policy' (?) 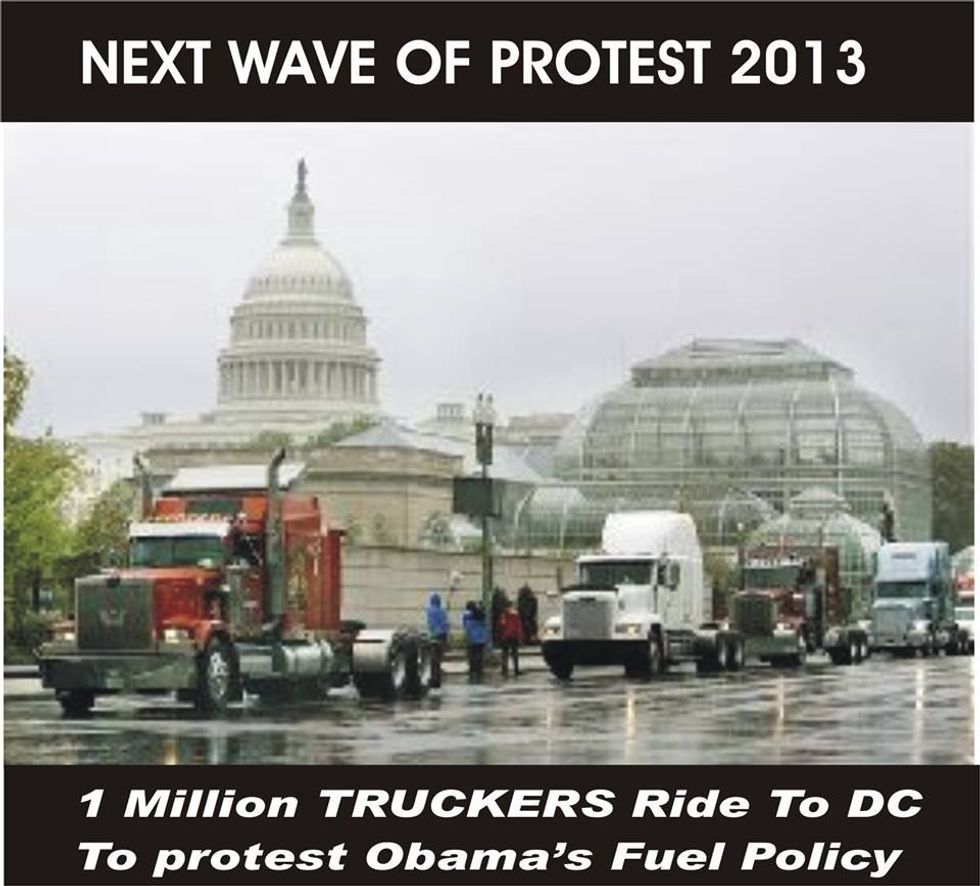 Dust off the Truck Nutz and grab your favorite lot lizard, because there's a new bunch of kooks out to save us against our wills: Truckers To Shut Down America! That's a link to their Facebook page, and it is fabulously dumb! The plan goes like this: 1) Don't work or buy anything for three days, October 11th through 13th. 2) ????? 3) FREEDOM! Also you can "Ride For the Constitution," which means you will drive your big truck to Washington, D.C. and get in everyone's fucking way, and it will save the Constitution. From the corruption. And gas prices! They are high, you know! It must be due to Obama's, uh, fuel policy:

This is what happens when the Tea Party and Occupy Wall Street have a drunk hate-fuck and the condom breaks.

Naturally, The Blaze was on this days ago, and they've thankfully preserved the The Truckers' original statement of purpose, which has gone from this:

My fellow patriot this effort is to support the truckers in a major shut down of America ion [sic] a 3 day strike October 11th thru 13th. Obamacare will be in effect and most people will be ready to take action. No commerce on those days stock up on items that you will need. No banking no shopping no money transactions.

It does not matter if a million or 50 roll through DC in this effort. Congress will listen to We the People. Which is remove Obama from office for crimes of treason and misdemeanors. We want Congressional hearing on Benghazi and Seal Team 6. Louis Learner [sic] put in jail. No amnesty, remove all Muslims in our government that do not uphold the Constitution. Remove Eric Holder from office for crimes against the people and the Constitution. Last but not least is Fuel prices.

The American people are sick and tired of the corruption that is destroying America! We therefore declare a GENERAL STRIKE on the weekend of October 11-13, 2013! Truck drivers will not haul freight! Workers will call in sick! Consumers will not buy or sell anything on this date! Stay home! Buy nothing!

Yes! Broaden that appeal, Truckers! Everyone will join you now, including those eleven longhaired friends of Jesus in a chartreuse microbus.

However, we have reason to suspect that this isn't just an innocent grassroots derp burp, because there is a Pete Santilli connection. Remember him? He's the radio man who wanted to shoot Hillary in the Benghina because she is a traitor against Pete Santilli. The "Truckers Shut Down America" Facebook page is plastered with reminders to tune in to Pete Santilli's Alex Jones-style brain poison radio show. Also, there is a thing where people can donate money to buy gas for the truckers. Seems legit!