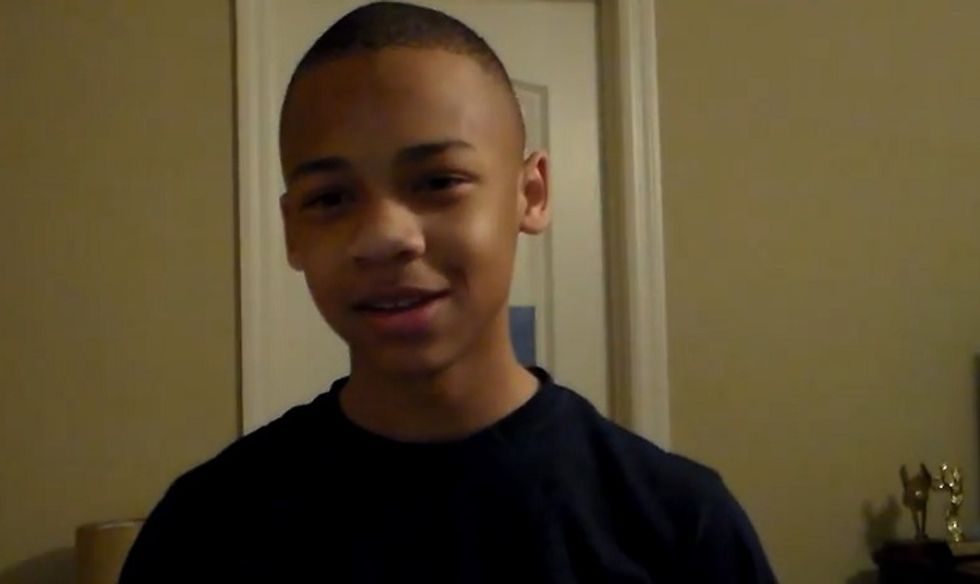 Meet fresh new viral sensation CJ Pearson, a Georgia middle-schooler who is all over the Wingnuttosphere this week because he has the courage to say that Rudy Giuliani is absolutely right: Barack Obama does not love America. Unlike the former New York mayor, CJ -- if he's not going to use periods between his initials on his YouTube page, then neither will we -- doesn't get into any of Giuliani's arcane stuff about how Obama was "raised differently from you and me," possibly because CJ wasn't raised by a low-level Mob enforcer.

Instead, CJ gets straight to the clearest evidence that Obama doesn't love America: the indisputable fact that he is doing nothing about ISIS.

Sure, that's a load of dingos' kidneys as far as an actual explanation of what ISIS is about? It might be a better description of COBRA. But it sure plays well to the conservative bloggers calling CJ wise beyond his years and smarter than the president. Of course, by CJ's definition, Pentagon and CIA analysts planning operations against ISIS must hate America too, seeing as how they seem to think ISIS is more about taking territory in Iraq and Syria so they can impose a radical fundamentalist version of Sunni Islam. If only they and Barack Obama would recognize that all the slaughtering of Shiites is really an attack on American values, then maybe they'd finally do a better job of dropping bombs on them. Which we guess they aren't doing enough of yet, because of the whole Obama-doesn't-love-America thing.

Oh, and CJ also thinks that if Obama genuinely loved this country, he'd stop trying to "take away what hard working Americans have worked for their entire lives." Young man has a real talent for stringing words together exactly like a generic Republican stump speech. Strangely, he doesn't say a word about Obama cramming anything down our throat -- probably wanted to save something for a second video.

Needless to say, CJ dreams of running for office someday, and he'll probably do great, unless he ends up like the GOP's last Great Child Hope, Jonathan Krohn, who at 13 addressed CPAC and then at 17 dropped out of conservatism and wondered why a bunch of adults had wanted to buy a book by a 13-year-old who was just repeating stuff he heard from Fox News and his parents all the time.

Anyhow, please remember in your comments (which we don't allow) that you're talking about a middle-schooler -- CJ certainly seems like a bright kid who's mastered the art of talking like he's on Fox News, and unlike the actual people on Fox News, there's every hope that CJ may someday grow out of that.