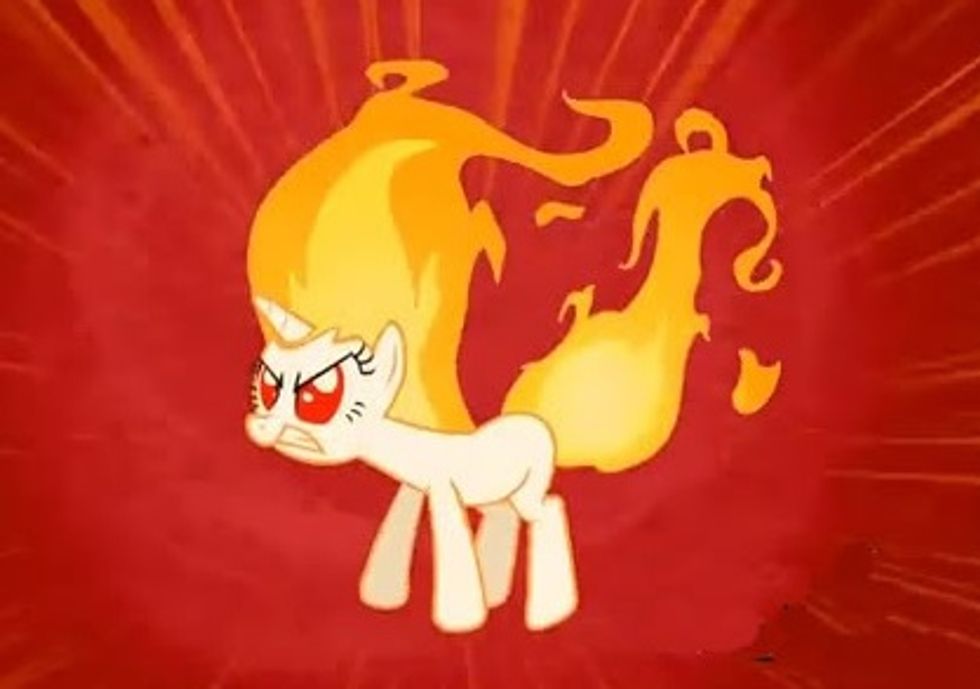 Funny thing about the political blogosphere: When politics blogs aren't busy dissecting the political implications of literally every nuance of modern life (you know, like the pro-bestiality agenda of Skittles ads), they find it absolutely shocking that somebody else might find political implications in news events. Case in point: stories at any number of rightwing websites expressing disgust at "liberals on Twitter" who have "blamed 'global warming'" (always in scare quotes, because there's no such thing) for the terrible deaths of 19 firefighters. And let's be completely clear here: Your Wonkette will not make any jokes about the Arizona firefighters' deaths.

Oh, but there's plenty of japes to be made at the faux offense taken by sensitive darlings on the right. Our favorite, of course would have to be the display at Glenn Beck's Home For Connected Malcontents, or The Blaze, because cheap irony. In addition to a sampling of outrageous sentiments like "#climatechange is a killer," the article also notes that all sorts of wild-eyed liberals, like science blogger Phil Plait, have made a completely unreasonable connection between global warming and the hot, dry temperatures that exacerbate wildfires in general, like those also plaguing Colorado. This is just silly extremism, say the same blogs that trumpet heavy snowfalls in the winter as conclusive proof that global warming is a lie.

And yes, of course it's impossible to say that any single weather event is or isn't the result of climate change, which is a long-term trend over decades. But it's also not exactly a huge stretch to say, yeah, this heat wave that is baking the entire Western U.S. sure seems like exactly the sort of thing we should expect from a warming climate, a thought that occurred to us yesterday as our wimpy window AC unit proved wholly inadequate against record-setting 110-degree weather that made Boise feel a lot more like our previous hometown, Tucson. But that's not really the point, because it is very unseemly to mention politics (Benghazi) after brave people (Benghazi) have died tragically (Benghazi).

One of the more inventive variations on the "crazy libruls blame 'global warming' for deadly heat" theme came from Florida tea-party blog The Shark Tank, which ran this overheated headline yesterday: "Obama: Global Warming Caused Deaths of Firefighters in AZ." Now, Barack Obama never actually said that, exactly, but he is guilty of politicizing the firefighters' deaths anyway, because he said this very divisive stuff in his weekly radio address:

And while we know that no single weather event is caused solely by climate change, we also know that in a world that’s getting warmer than it used to be, all weather events are affected by it.

More extreme droughts, floods, wildfires, and hurricanes. Those who already feel the effects of climate change don’t have time to deny it, they are busy dealing with it. The firefighters who brave longer wildfire seasons, to farmers who see crops wilted one year, and washed away the next...[emphasis added by Shark Tank]

Of course, that radio address was given June 29th, so Barack Obama played the neat trick of blaming the Arizona firefighters' deaths on global warming a full day before they died. He's just that insidious!

We haven't yet seen any wingnut blogs blame the firefighters' deaths on the sequester (which of course was all Obama's fault), although Think Progress notes that the firefighting effort has at least been hampered by budget cuts, possibly because there are so few firefighters in Congress.

But if liberals are completely off-base in blaming deadly fires on a climate phenomenon that atmospheric scientists are in near-total agreement on, it's still perfectly reasonable to look for the real causes of wildfires. For instance, a couple of Colorado radio preachers have discovered the most likely reason for the wildfires in that state: God is really angry about "the state’s liberal abortion laws and the recent success of civil union legislation." And Colorado Springs, which fools might think would be spared since it's Jesus Central, is getting hit hardest because God thinks the community has not done enough to stop all those libruls. It is just LOGIC. And don't even get them STARTED on allegedly-Christian women wearing hats and pantsuits.

It's just a relief that they didn't politicize the wildfires by dragging science into the discussion.