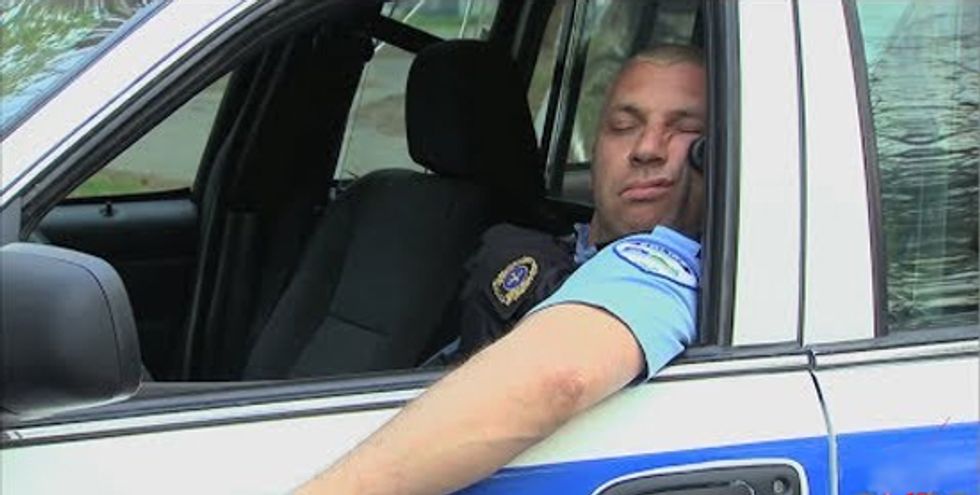 ThisSecret Service thing, huh? It's quite a mess, and by golly, the right is just outraged that the agency is doing such a crappy job of defending the president they hate. Thank heavens they know who's responsible for the security lapses: That feckless dictator Barack Obama, who just can't do anything right except take away all our liberties and make us live in a police state that is nonetheless not very good at keeping the president of the United States.

For instance, there's conservablogger Melissa Clouthier, who tweeted this analysis:

So lazy, Barack! It's rubbing off on everybody else! "Counter-culture conservative" blogger Steven Miller knows exactly who's to blame, too: those arrogant "smart people" in the administration:

Miller also called out liberals for their complete hypocrisy at being worried about the real president's actual security, even though they didn't protest one single bit when a British TV movie that almost nobody saw depicted the aftermath of a fictional assassination, because both are pretty much exactly the same:

And here's a very smart blogger who knows that, just as he kept us safe from terrorism, George W. Bush kept the president safe, too:

And Breitbart horcrux John Nolte knows where the REAL problem lies: All those darn women!

What a country! And along similar lines, MSNBC's Joe Scarborough jumped on the Laura Ingraham bandwagon and blamed "political correctness" for the Secret Service's problems. Did you know that Secret Service director Julia Pierson is a girl? That's probably the only reason she hasn't been fired yet, according to Morning Joe panelist Donny Deutsch:

"As we kind of go through her resume, you go 'Obviously, coming off the prostitute scandal, okay, yeah, women on top makes sense, good for the brand, if you will.' But the brand doesn’t work if it’s not competent."

Thanks, Donny! We'll confess we hadn't considered just how much Pierson's ladyparts must have contributed to her many failings as a director of the Secret Service. Oddly, we don't remember anyone saying that Obama let Eric Shinseki stay on as head of the Veterans Administration because he had a penis, but maybe we should look into that.

Never one to let his guests be douchier than himself, Scarborough worried that allowing petite little womenfolk to guard the front door of the White House is probably a terrible idea, too:

"Now, if a woman, 6' 4", can tackle a big guy or a big woman that's intruding, that's one thing," he said. "But we can't have people standing between the President of the United States and a terrorist that can get knocked down and that's there for politically correct reasons."

Sure, Omar Gonzales eluded a whole front yard full of Secret Service agents, and the alarm system had been shut off, but ultimately, it's the female Secret Service agent -- who we'll just assume is not built like Shelly Duvall -- who was the flaw in the system here.

Fortunately, there are some folks who are giving serious thought to how to fix this problem. Like this bizarro piece in the Washington Post's "PostEverything" section, which suggested that since we're at war (are we, really?), we should maybe "[bring] in the United States Military" to protect the White House. And the editorial even suggested the perfect man to lead a reformed Secret Service: Allen West, who "has successfully demonstrated that he possesses the leadership skills of a combat officer as well as managerial and diplomatic skills of a congressman." Seriously, this ran on a WaPo website, not some off-brand conservative aggregation site. You'll be delighted to know that Fox's Brian Kilmeade thinks it's a heck of a good idea, too.

And finally, our winner of the Stupidest Goddamn Thing Said About This Sort Of Thing goes not to anyone at Breitbart or Daily Caller, but rather to Politico, which gave always credible serious journalist Ronald Kessler the chance to explain that the entire culture of the Secret Service is dysfunctional, and that Barack Obama is Not Helping by failing to fire Pierson two weeks ago already. And there's nothing at all bizarre about Kessler's conclusion, is there?

Agents tell me it’s a miracle an assassination has not already occurred. Sadly, given Obama’s colossal lack of management judgment, that calamity may be the only catalyst that will reform the Secret Service.

Well OK, then! At least Kessler's given some consideration to the reform options.

Yr Wonkette doesn't have any ansers, but we're fairly sure that the Secret Service can be fixed without quite such drastic measures. Maybe they just need to remember that they need to be ready for all unexpected situations, as Jaques Arsenault tweeted: