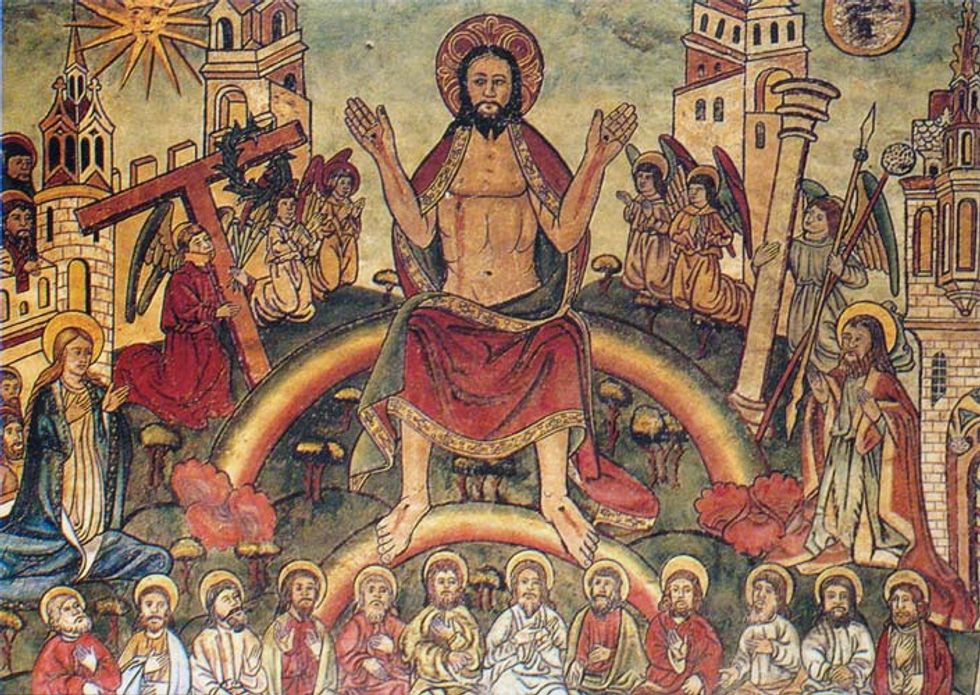 In what has to be either an amazing coincidence or the result of a drunken late night conference call, two different rightwing Christianists have suddenly proposed the idea of establishing "Sanctuary Cities" where Christians can be safe from oppression, free to pass laws against abortion and gay marriage, liberated from tyrannical Supreme Court decisions they don't like. This seems like a perfectly reasonable solution, because if there's one thing America's about, it's local freedom to ignore the Constitution.

You see, both Gary Bauer and Mat Staver explain, since some cities have decided not to turn over undocumented immigrants to federal immigration officers, it only stands to reason that there should be places where conservatives can gather, able to openly practice their faith by discriminating against gays and women. Bauer writes in the American Thinker (which has still not been shuttered despite flagrantly violating truth-in-labeling laws):

Imagine if some city in red-state America – perhaps Little Rock, Arkansas; Dallas, Texas; or Bowling Green, Kentucky – decided to be a refuge for unborn children and refused to grant business licenses to abortion clinics.

What if a city decided that it was going to be a sanctuary city for the Ten Commandments and displayed them in schools, libraries, and the county courthouse?

What if a city decided that it was important for children to have mothers and fathers, declared itself a sanctuary city for traditional marriage, and refused to issue marriage licenses to same-sex couples?

We especially like that idea of being a "sanctuary" for unborn children, who would presumably travel to these places after making a daring escape from their slut-mommies' wombs, maybe schlepping over the Alps like teensy unborn von Trapps. Or the notion that unless you have the Ten Commandments plastered on every flat surface, Christians are being oppressed, because just having them in their churches, homes, or hand-painted across their RVs in shaky red lettering is simply not enough.

Sadly, Bauer immediately wimps out, admitting "I’m kidding, but only slightly. A glance at the news headlines underscores the growing need for a place of refuge for conservatives." Like maybe Uruguay in the 1970s, we guess. And then the rest of the column is a bunch of examples of how conservatives are the most oppressed people since ... well, ever!

Staver, on a rightwing talk show last week, was a bit more literal, begging brave conservative governors and mayors to stand up to the tyranny of women making choices about their own reproductive organs and other people getting married with the wrong combination of sex parts, since both those things make it impossible for Christians to live freely:

Staver, a lawyer with the rightwing Liberty Counsel, encouraged local governments to "stand up and resist" the Supreme Court's decisions on abortion and marriage equality, because who gave them the power to interpret the Constitution in a way that's different from how Staver does? States need to say:

We have an independent duty to also interpret the same Constitution that they do, and there's nothing in there about a Constitutional right to same-sex marriage, so in our state, I think what they ought to do is still say marriage is between a man and a woman, and we're not going to recognize anything else.

Seems to us that he may not have the Constitution quite right there, but ignoring the Supreme Court is the hot new thing among conservatives this week.

Staver then gave the heartrending example of one of his poor oppressed clients, Kim Davis, a clerk in Rowan County, Kentucky, who is being forced against her will to do her fucking job, which is issuing marriage licenses. She needs a sanctuary city to live in where she won't have to do her fucking job at all, because when a clerk issues a license for anything, it puts that clerk's stamp of moral approval on that thing:

This is a pretty advanced legal theory. Maybe in sanctuary cities, the clerk at the DMV can refuse to give you license plates if you drive a car that offends Christian religious sensibilities, like a Prius, or a 1972 Dodge Demon. Why should bigots be forced to do their job when someone else might do stuff they don't approve of? Next thing you know, decent white supremacist county clerks will have to issue marriage licenses to interracial couples. The horror.