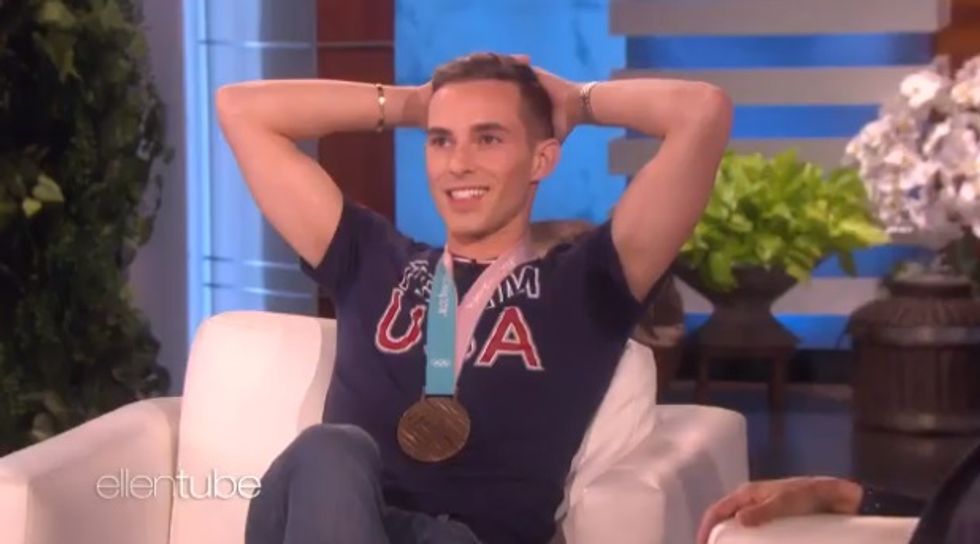 Better things to do.

You want a JOYFUL STORY for your Friday? Here is a JOYFUL STORY for your Friday! It is about all the US American Winter Olympians who decided they were washing their hair, grooming their cat, or just generally had plans to do ANYTHING but go to the White House today to meet the bucket full of cat taints that is currently our president, Donald Trump. So many of our best and brightest and bendiest and sexxxxiest Olympians took the "Fuck You" train to Anywhere But The White House today, and it warms our heart:

Lindsey Vonn won’t be there. Neither will opening ceremony flag bearer Erin Hamlin, or Adam Rippon, or almost all of his figure skating colleagues, or Chloe Kim, or Gus Kenworthy, or Jessie Diggins, or David Wise.

THOSE ARE ALL THE BIGGEST CELEBRITIES OF ICE SKIING AND SNOW DANCING! Seriously, Lindsey Vonn is basically the queen of skiing, and Adam Rippon is America's skating sweetheart, and Chloe Kim is such a badass gold medal-winning snowboarder we cannot even right now. Oh yeah, and skier Gus Kenworthy, the OTHER adorable openly gay member of the US Olympic team, along with Rippon, who stole America's entire heart during the Olympics, even though half his time off the ice was spent fending off Mike Pence's constant advances. (For a meeting! Not the gay kind of meeting! Mother wouldn't approve of that!)

USA Today talked to Rippon, who is just regrettably so busy right now:

"It’s a convenient out,” Rippon said with a smile in a recent interview, referring to his various commitments, “but I was not going or planning on going (to the White House) anyway. I have been invited to so many incredible things, to the Human Rights Campaign dinner, the GLAAD Media Awards. I was so honored and so excited to go to those, more so than I would be to go to the White House. I feel like it was more important for me to go to those events because it’s a cause that I really believe in, it’s a message that I believe in. It's important for me to align myself with those people who have the same ideals that I have.”

You hear that, President Shitmouth? It's NOT AN HONOR to visit your White House. All the good people in America will be excited to visit as soon as President Kamala is sworn in, OK?

Erin Hamlin, the luge person who was the flag-bearer at the opening ceremonies, is in DC, but oopsie, she was booked for an event at Johns Hopkins this morning. What a loss for her.

Let's see who else didn't go:

Five Olympians from different sports – Alpine skier Stacey Cook, biathlete Maddie Phaneuf, snowboarder Arielle Gold and gold medalists Diggins (cross-country skiing) and Wise (freestyle skiing) – came together Wednesday to brief Congressional leaders as members of the Protect Our Winters Alliance, a climate change advocacy organization. But none of them is staying for the White House visit.

GOTTA CATCH THIS PLANE THE FUCK OUTTA HERE, BRB IN 2021.

USA Today notes that the gold-medal-winning women's ice hockey team went, but shares a quote from an agent close to the team who says it's really mostly because they haven't seen each other since the Olympics, so the White House it is. (They guess.)

Now, we must go ahead and ruin this happy post, with news about what happened when those ice hockey ladies and the rest of the Olympians DID show up at the White House on Friday. Based on the president's bad behavior, we doubt the Olympians who have featured in this post so far are regretting playing hooky from sharing breathing space with President Shitmouth!

BuzzFeed journalist Chris Geidner live-tweeted the whole thing, so check out his whole timeline, but here are a couple of highlights, including this thing, where OH HOLY GOD, the president said that, though he was very proud of the US paralympic team, it was "tough to watch" them:

Full quote on the Paralympics section I quoted from above: "What happened with the Paralympics was so incredible and so inspiring to me. And I watched — it's a little tough to watch too much, but I watched as much as I could. It was really fantastic, and I want to thank you." pic.twitter.com/NijkzVpZoG

Wow. Are we supposed to be impressed Trump got through the event without giving a visual example of what he meant?

"Do we have any quitters here? Because if so, I was gonna say, 'Get the hell out!'" - President Donald Trump pic.twitter.com/iBnbX4r0vC

THAT'S RIGHT, PRESIDENT BEEF POOTS, SO MANY "QUITTERS" AT THE OLYMPICS.

Jesus, man. We're just surprised he didn't tell them there was no collusion, no collusion, and something about how James Comey should be LOCK HER UPPED!

To the women's hockey team, we are sorry you had to endure that.

And to all who skipped it, for whatever reason, MAZEL TOV, and we hope you had a beautiful Friday Funday.