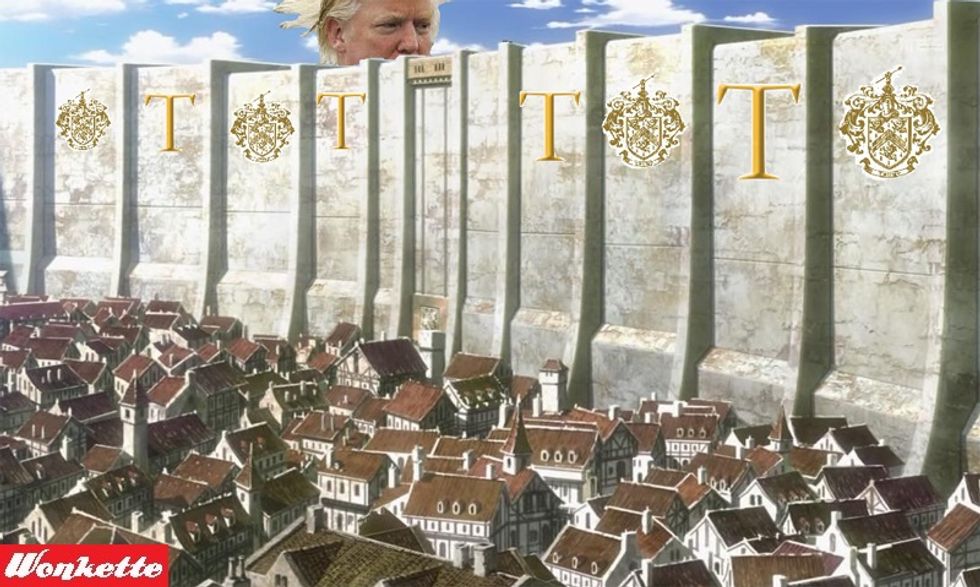 The wall will stop hurricanes and earthquakes, too!

The Trump administration is considering slashing the budgets of several federal agencies to pay for the beautiful tall Mexican-proof wall on the U.S.-Mexico Border and other vital parts of the New Cruelty, so that could mean big cuts for less-essential government functions like the Coast Guard, the Federal Emergency Management Agency, the TSA, and other stuff that Trump never got people to chant about at his rallies. Maybe we can convince Mexico to pay for disaster relief.

The draft plan was obtained by the Washington Post from some malcontent in government, yet another indication the Trump administration is leaking like a fishing boat whose crew the Coast Guard can't afford to rescue now:

The proposal, drawn up by the Office of Management and Budget (OMB), also would slash the budget of the Federal Emergency Management Agency, which provides disaster relief after hurricanes, tornadoes and other natural disasters. The Coast Guard’s $9.1 billion budget in 2017 would be cut 14 percent to about $7.8 billion, while the TSA and FEMA budgets would be reduced about 11 percent each to $4.5 billion and $3.6 billion, respectively.

Honestly, who really needs 'em anyway? The fun part is that the budget cuts for those agencies and others would be coming even as the Trumpers plan an expansion of funding for the Department of Homeland Security, which oversees all three agencies. But the cuts to boring stuff have to be made to build the sexy wall, fund immigrant detention centers, and hire 500 more Border Patrol agents and 1,000 new Immigration and Customs Enforcement (ICE) agents, plus support staff for all the beautiful new anti-immigrant forces. With all those cuts to unnecessary stuff like disaster preparedness and relief, ICE will get a whopping increase of 36 percent, and Customs and Border Patrol (CBP) will be treated to an extra 27 percent in funding.

Ah, but don't get your Coast Guard-loving liberal knickers in a twist, you snowflakes, it's only a draft!

Michael Short, a White House spokesman, cautioned Tuesday that the Trump administration is still early in the process of working on the budget, which the administration will send to Congress later this month. He and a DHS spokesman, David Lapan, referred other questions to the OMB, which did not respond to requests for comment.

“Trying to draw conclusions this early would be extremely premature,” Short said.

Strangely enough, some Republicans who are Tough On Immigration think maybe the draft OMB plan isn't such a terrific idea. California Rep. Duncan Hunter, who's a big Trump fan himself, and heads the House subcommittee that does Coast Guard stuff, worries the OMB may actually be betraying Donald Trump's glorious anti-immigration plans, since the Coast Guard intercepts seaborne immigrants and drug smugglers, too.

“OMB has always treated the Coast Guard like a little piggy bank that they can go after whenever they need money for anything else,” Hunter said. “If the president is serious about getting after the cartels and getting after drug networks, this makes no sense.”

Well gee, Rep. Hunter, you don't suppose a stupid idea could ever come from the president himself, do you? We are kidding, of course -- Hunter's clearly using language Trump will actually understand, blaming a federal agency for selling out the Dear Leader's agenda. Smart boy! But it's not like the Coast Guard really does anything for national security anyway, does it?

The Coast Guard cuts include deactivating Maritime Security Response Teams, which carry out counterterrorism patrols in ports and sensitive waterways, and canceling a contract with Huntington Ingalls Industries to build a ninth national security cutter, with a potential savings of $500 million.

The Post talks to a former Navy helicopter pilot with the best nickname ever, Rick “Ozzie” Nelson, who's with the Center for Strategic and International Studies; he says the cuts to the Coast Guard would be counterproductive, since the Coast Guard is good at exactly the things OMB wants to slash:

“If they’re not there to do it, who is there to do it?” Nelson said of port security. “We’re not going to put destroyers and frigates off the coast to protect those ports. That’s a Coast Guard mission and capability.”

The TSA cuts don't seem altogether terrible, frankly; they'd mainly hit four programs within TSA, two of which seem kind of dumb: the "Armed Pilot" training program, which teaches pilots to be Rambo, and the "Behavior Detection Officer" program, which supposedly trains agents to recognize travelers who act strangely in airports, which as far as we're concerned is everyone in an airport. Money for TSA's version of SWAT teams and to pay for local law enforcement to patrol near airports would also be eliminated, which is maybe shortsighted, or will look that way when something goes terribly wrong.

The FEMA cuts also seem to be a mixed bag, getting rid of some anti-terrorism programs that actually seem wasteful, but also slashing aid to states for disaster preparedness and coordination between state and federal government before an emergency. The logic there escapes us, though of course it should be noted that Donald Trump never made a show of parading parents of people killed by hurricanes and tornadoes onstage at his rallies. There's nothing sexy about a program that makes sure federal and state emergency response systems actually work together, except maybe it could save some lives when a disaster hits.

There's also no mention of cuts to the secret FEMA program aimed at rounding up patriots and taking their guns away, which you'd think would be the first thing they'd get rid of. Is Team Trump even paying attention to the core concerns of its supporters?