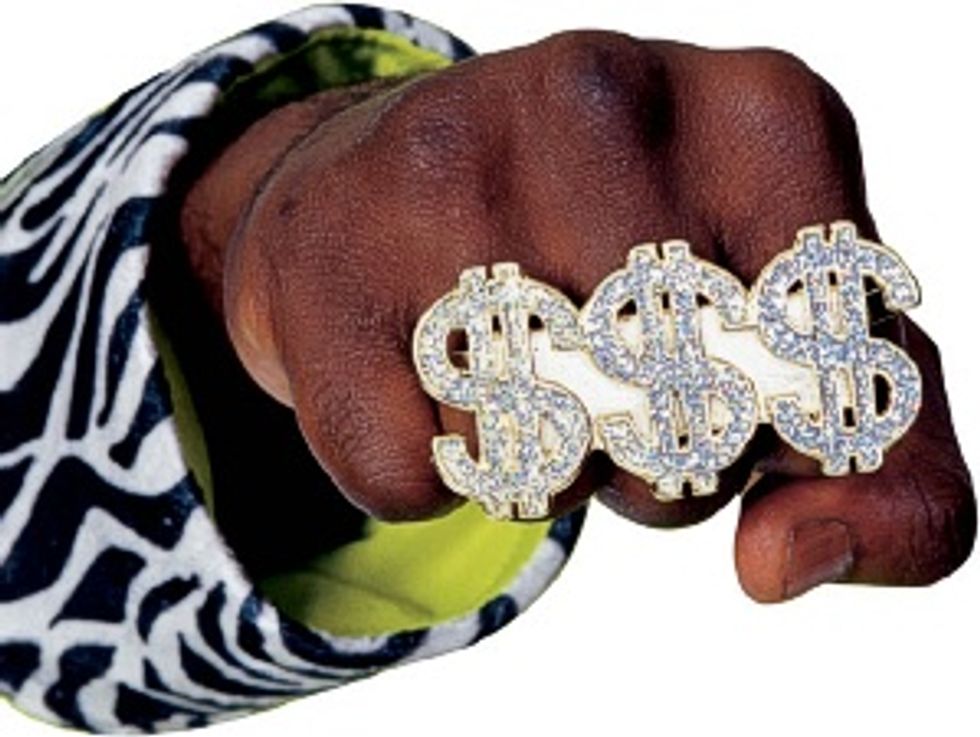 It's been nearly...oh, a few days, maybe, since there was an insane conspiracy theory about Barack Obama, so of course there's another one!

Barack Obama has a wedding ring, and unlike a normal American male, it is slightly fancy with squiggles and shit. Dr. Jerome Corsi, Ph.D., has investigated the ring through blurry, pixelated pictures and also consulted noted Islamic ring expert Mark A. Gabriel (who has a doctorate in "Christian Education") who says without a doubt that the pictures of the ring are almost entirely certainly Islamic.

Egyptian-born Islamic scholar Mark A. Gabriel, Ph.D., examined photographs of Obama’s ring at WND’s request and concluded that the first half of the Shahada is inscribed on it.

“There can be no doubt that someone wearing the inscription ‘There is no god except Allah’ has a very close connection to Islamic beliefs, the Islamic religion and Islamic society to which this statement is so strongly attached,” Gabriel told WND.

Below, the indisputable pictorial evidence that will convince you beyond a doubt that Obama's ring...has squiggles on it?

We don't know about you, but those Microsoft Paint squiggles lend as much credence to this theory as it actually being true. Look at how closely that weird W looks almost like the Arabic lettering below that's never translated!

Gabriel believes it would be impossible for Obama not to be aware of what is written on the ring, calling it a “blessed statement in Islam.”

“By wearing this religious statement on one’s hand, it connects the person to Islam,” he said. “It is worn in hopes that Allah’s protections would be with the person, in hopes of gaining favor with Allah.”

He affirmed that Muslim men do wear gold rings, despite prohibitions in Islamic law.

“Though Islamic law prohibits the wearing of gold jewelry by men, it is a widely accepted custom, even in strictly Muslim countries,” he said. “The wearing of gold rings is even more acceptable when it contains a religious message, such as ‘There is no god except Allah.’”

We can't wait until Corsi and Gabriel can do intense analysis on Obama's cock ring, which has an engraved picture of Khalid Sheikh Mohammed on it. We'll volunteer for any help they need with that one!