Women In Tech: When Will They Shut Up And Be Men? 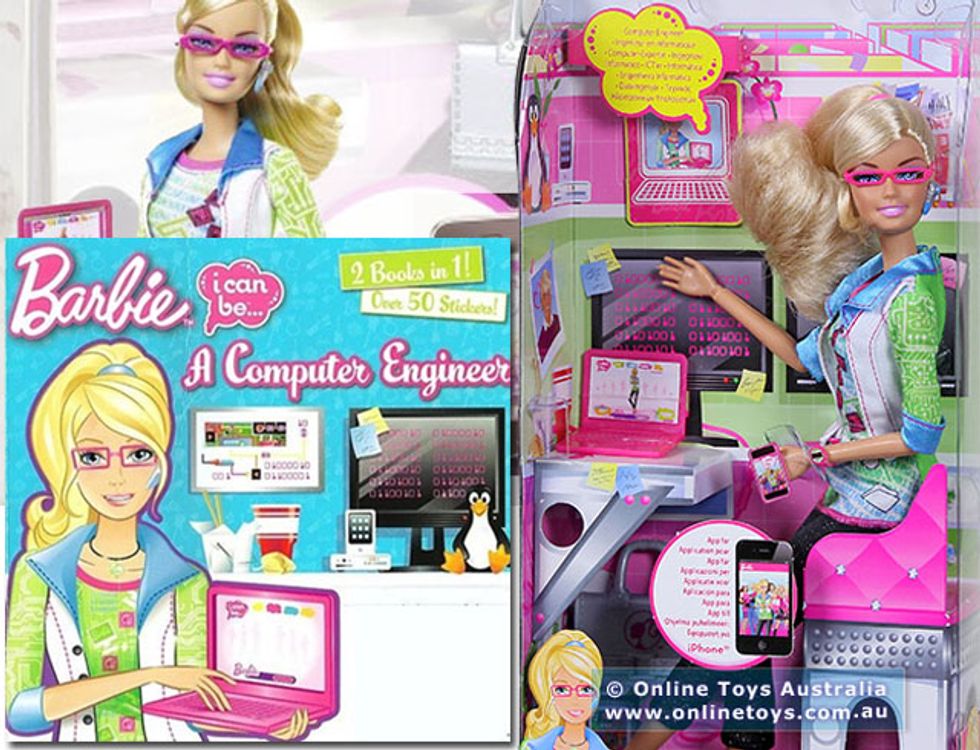 Women in technology continued to be a big problem this week, insisting that somehow the fact that they are women was even noteworthy, AS IF. Let's start with the genuinely horrible and end with the slightly less horrible, shall we?

From the seemingly endless morass of misogyny and stupid (plus very legitimate concerns about gaming journalism) that is "gamergate" comes the news that, for a very brief time Friday Amazon carried a self-published e-book detailing a violent rape fantasy about one Zoe Quinn, one of the game developers who has been the target of online harassment by a raving pack of assholes who somehow have convinced themselves that threatening her and other women game designers will somehow bring justice to the world.

(If you're lost and confused about what the hell Gamergate is, Gawker did an explainer a while back. Zoe Quinn is hated because she developed a game, and then an ex-boyfriend accused her of having sex with game reviewers so they'd promote it. Never mind that the only true parts of the story are that she created a game, she had a boyfriend, and they broke up. On the internet, things don't have to be true -- besides, she complained about misogyny after the death and rape threats, so she's the sexist.)

Some witty fellow -- we'll assume, sexists that we are -- wrote a 3000-word e-text and published it for Kindle with this charming description:

Zada Quinby is a controversial video game designer who may have crossed the line ... ,” When her latest game offends the nation, five upset players decide to teach her a lesson. This gang of gamers decides to give Zada of [sic] piece of their mind, and much more!

Minutes after RawStory covered the existence of the thing, it was pulled by Amazon; an Amazon rep told RawStory's Scott Kaufman that the book

appears to violate Amazon Kindle Direct Publishing’s Content Guidelines, which indicate both that “[w]e don’t accept pornography or offensive depictions of graphic sexual acts” or other “offensive content,” which they define as, “[w]hat we deem offensive is probably about what you would expect.”

The book was up long enough for Ms. Quinn to find out about; on Twitter, she noted its existence in a couple of tweets:

And of course, with the incredible logic of the internet, when Kaufman tweeted an update to his story Friday morning, noting that the book had been pulled by Amazon, someone complained that he hadn't given credit to the true heroes of the story:

After all, how could it have been removed if some gamergate stalker hadn't created it in the first place? (Yes, we know -- maybe it was written by someone who just wanted to make gamergate look bad.)

On a somewhat less loathsome note -- which we must emphasize is a very relative judgment -- comes this story from Wired by three computer scientists at MIT who did an "Ask Me Anything" post at Reddit last week. Elena Glassman, Neha Narula, and Jean Yang started off the event by writing,

“We’re 3 female computer scientists at MIT, here to answer questions about programming and academia. Ask us anything!”

Well Jesus, what were they thinking, being such rank sexists? The questions came in pretty quickly, mostly getting to the most important word in their post:

“Why does it matter that you’re female?”

“Why did you put gender in the title?”

“Why should your gender matter if you’re talking about research?”

Silly women, why did they have to go and rub their boobies and genitals all over the computer screen like that? In a truly equal world, no one would ever mention gender, and then there'd be no sexism!

They also got some marriage proposals, questions about their bra sizes, and multiple orders to make a sandwich (hahaha, that joke NEVER gets old, and we can hardly wait for someone in the comments to make this story to make it, only then it would be ironic). There were also some more clueful commenters, like the person who said that the whole AMA became “a parody of what it’s actually like to be a woman working in a STEM field.”

The writers do explain why they included that red-flag word in their Reddit description:

As computer science PhD students, we were interested in fielding questions about programming, academia, MIT CSAIL, and how we got interested in the subject in the first place. As three of the few women in our department and as supporters of women pursuing STEM [Science, Technology, Engineering, and Mathematics], we also wanted to let people know that we were interested in answering questions about what it is like to be women in a male-dominated field. We decided to actively highlight the fact that we were three female computer scientists doing an AMA, to serve as role models in a field that’s less than 20 percent female.

So as you can see, they're just raving feminists, as demonstrated by the fact that they even knew that percentage. It shouldn't even be noticed. Of course, if they hadn't included the word "female" in their description, gender wouldn't have come up at all, right? Not that women face any barriers or discouraging messages about participating in science and tech.

Ultimately, though, they believe that despite all the idiots, it was a worthwhile effort:

We were able to raise awareness about technical privilege, implicit bias, and imposter syndrome. The questions and responses in the AMA also gave both male and female Redditors a platform to share their own experiences in and suggestions for environments unfriendly to women. Many women supported our answers by telling stories of their own experiences. Numerous men asked how they could help be allies–and many people jumped in to offer helpful responses.

And if you are looking for a silver lining, there it is. Even on the interwebs, sometimes people can learn things ... that you rather wish they didn't need to be taught at all.