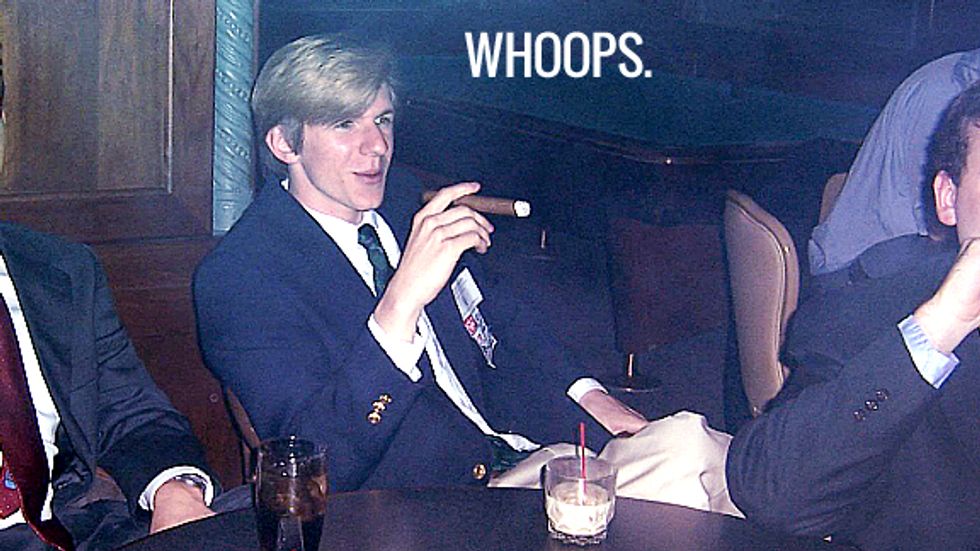 James O’Keefe—the blonde bombshell who set the conservative world of hidden-camera YouTube movies ablaze—has just agreed to a $100,000 settlement to calm down the unjustly fired (and weirdly litigious about it) ACORN employee Juan Carlos Vera. According to a copy of the deal, obtained late last night by your wonkettes and viewable after the jump, O’Keefe has also agreed to ink an 11-word non-apology apology, that sources close to reality are calling “insincere” and “suuuuuuuch bullshit.”

According to the final 5-page agreement, signed by O’Keefe and his legal counsel Mike Madigan this past Tuesday, the boy detective now publicly “regrets any pain suffered by Mr. Vera or his family.” O’Keefe and his counsel have also consented to fork over the $100,000 within 30 business days of the settlement agreement’s being signed.

For the benefit of readers who are neither bitter and aggrieved former ACORN employees nor forum moderators at Democratic Underground, a short summary: ACORN was a community organizing group that became the locus of phantasmically baroque conspiracy theorizing in the build-up to the 2008 presidential election, first by the usual sad idiots, but inevitably by the seemingly rational journalists who must cover the sad idiots to pay their mortgages. ACORN attracted this negative attention, in part, because of its large and effective voter registration drives, which enfranchised record numbers of minority and low-income voters, who are demographically likely to vote for Democratic Party candidates. The sad idiots believed there was a collusion scheme between ACORN and a former employee of the group, who happened to be that year’s Democratic Presidential candidate: a ferocious IRA terrorist-sympathizer named Barrance Hussein O’Malley. In reality, ACORN’s decades-long campaigns to raise the minimum wage and their battles against predatory lenders had simply invited the animus of powerful business interests—who fund the media activities of sad idiots and rule the planet for like-minded reptilianoid pedophile Illuminatus from the 4th Dimension.

Juan Carlos Vera worked at the National City offices of ACORN in California.

In 2009, two twenty-something conservative activists, James O’Keefe and Hannah Giles, hoped to expose criminal malfeasance at ACORN by filming Vera without his consent, themselves violating section 632 of the California penal code in the process. Vera sued both parties over this and the wild misrepresentation of his activities in the edited version of the undercover video, posted online. (Giles settled with Vera and his attorneys this summer.) The episode is a quintessential example of a wholly original term, which we have just coined: journalistic malpractice.

But wait! “Those goldurned trial lawyers!” literally ALL OF YOU are swearing. “James is an honest man! He’s the president of a 501(c)3 nonprofit committed to modern-day muckraking! What kinda carpetbagging shakedown is this?!?!”

Well, counterintuitively, this is a shakedown of all the delusional pensioners, mom-and-pop charitable givers and deranged millionaire philanthropists who have given to James O’Keefe’s Project Veritas and continue to donate.

Since at least the spring of 2011, Veritas has contracted its fundraising efforts to the direct-mail marketing firm American Target Marketing. (atm!!! u guyz i just realized ha.) ATM’s founder and owner Richard Art Viguerie is literally on his fourth decade running the operation as an aggressively for-profit entity; it frequently nets more than half of the money raised for its nonprofit or political clients, to cover its own opaque “operational expenditures.” Even Marvin Lieberman—who employed Viguerie as an executive director of the equally sketchy student group Young Americans for Freedom in the 1960s—has gone on the record as saying Viguerie and his firm “rape the public.” Personally, your wonkettes are sick to our little stomachs awaiting the inevitable email blast from Project Veritas screaming, “We’re Under Attack! The Tort-Happy, Bloodsucking Lawyers And Liberal Media Vultures Are After Us ... AGAIN!!!! Only That Money You Were Saving To Fix The Lincoln Towncar On Cinder Blocks In Your Front Yard Can SAVE AMERICA!!!! Abortion!!!”

Still, as Vera’s attorney Gene Iredale suggested to us in a telephone interview, O’Keefe’s willingness to pay this exorbitant sum is, by itself, a tacit admission of guilt. The sum is $35,000 more than James received from Andrew Breitbart for his “life rights” based on the top-shelf (derp-derp) quality of the ACORN videos in the first place. So, a limited amount of justice has been served.

It is also illuminating to know that O’Keefe and his handlers have determined that it was worth at least $100,000 to avoid publicly losing a court case, and thus further tarnishing the James O’Keefe “folk hero” fundraising brand with a guilty verdict directly related to sloppy journalism. If you do the math, this diversion of funds could have paid for two Project Veritas “investigations” on the scale of their seemingly never-ending Voter ID project last year.

Yet, while the size of the payout is revealing of O’Keefe’s perceived further utility to the conservative movement, it also leaves many pertinent questions unanswered.

Has representing James O’Keefe been the most embarrassing case for Mike Madigan since his stint on the old Clinton Whitewater investigation with Ken Starr? Or MORE embarrassing? Can Clark Hoyt, Zev Chafets and the New York Times Magazine suck a cold bag of dicks for legitimizing O’Keefe’s ACORN videos in “the paper of record” YEARS after they were discredited? What would YOU do with a $100,000 settlement?