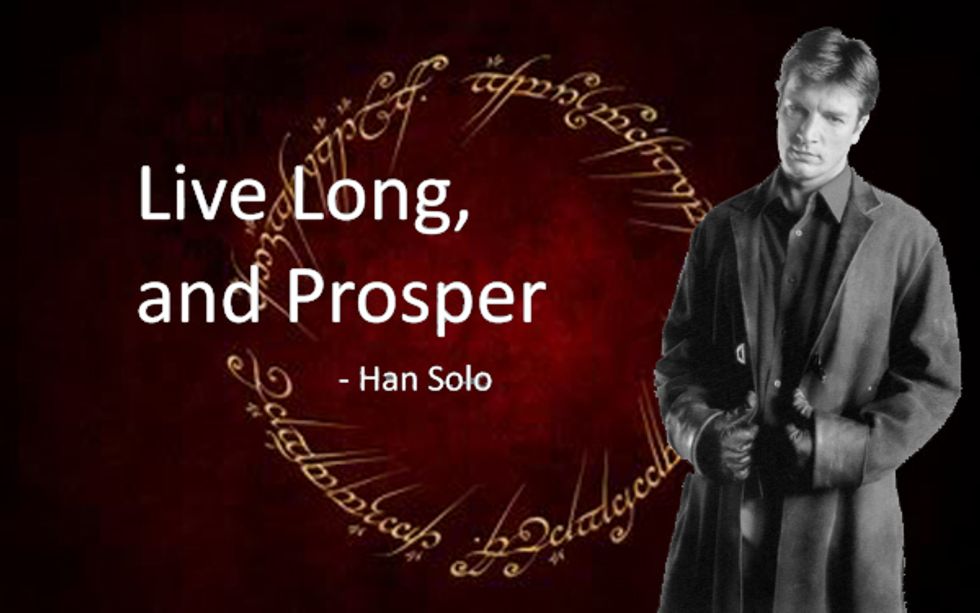 Here's how it is. The New York Times got used up, so we went out and scripted a whole new internet of blogs. Some rich and flush with the new servers, some, not so much. The central blogs, them as formed the wingnuttosphere, wrote propaganda to bring all the internet under one rule. Some idiots tried to fight it: among them, myself. I'm Kid Zoom, Teen Kolumnist and mascot of Wonkette. She's a mommy-blog, Wordpress class. We've got a good crew:an editrix,somebloggers, and... well, morebloggers, actually. We even picked up a science writer, and a bona-fide Kossack. There's a Doktor, too; took his genius son out of some Idaho school, so they're keeping a low profile. You understand. You've got a crazy politics story, we can write it. Don't much care what it is.

That right there was an example of Yr. Teen Kolumnist being nerdy as hell and bringing a Firefly reference. If you don't know it, get out. Right now. Comment "I am ignorant and ashamed," and come back after you have watched the series. It's on Netflix, you have no excuse. But I digress. Mah point is, being nerdy is still a thing, guys, even if the popular kids play the Call of Duty and the Skyrim. We are just having to find new and exciting ways of being nerdy. We have left behind your "Star Trek" nerdiness, and have nerd powers that you could not even imagine. And this isn't even our final form! Nerd Teens are now politely requesting, with perfect spelling and grammar, that you witness the power of our fully operational thinking station.

First of all, we who call ourselves nerds are losing grounds of nerdiness. Our ultimate refuges are quickly being co-opted by jocks and stoners, and it's only a slight comfort to know that those guys don't even know what "co-opted" means. Call of Duty fell long ago, but a more recent, disturbing discovery has been made: Jocks and stoners are beginning to invade Minecraft. WHY, JOCKS? WHY MUST YOU DESECRATE THE SACRED SHRINE TO NOTCH? No joke, I have talked to multiple jocks who have made Minecraft references. Also, what was once the elite legion of nerdiness has been infiltrated by the enemy, as we USED to call them. (What is happening to us?) The ranks of the debate team now hold as many jocks as nerds. A moment of silence, please, for this tragic loss.

However, there are still some precious boundaries that separate us true nerds from the faux-nerd masses. One of the greatest of these is the PC gaming master-race. Steam and Origin are as yet untouched by non-nerds, as they prefer their non-alterable consoles. However, we know the true, heavily modded gaming path, and will not let them forget it. Another boundary is playing Pokémon (and remembering to include the little accent mark). Especially the old versions, as they are far superior. This ties into another boundary: preferring the original because it came first. Although new Pokémon games are fun, nerds hate them. Why, you ask? Because they are new.

A surprising boundary is politics. We of the nerd race are generally the ones most likely to have researched, and understand, what should be a mainstream topic. In Debate last fall, where you'd think people would know stuff, the teacher mentioned Muammar Khadafy, and one of my classmates pulled a Herman Cain and asked if that was "the guy who shot all those people in that theater." IT WAS LESS THAN FOUR MONTHS AFTER THE AURORA SHOOTINGS, FOR CHRIST'S SAKE. And when the teacher and I corrected her, she said, no, Saddam Hussein was the King of Libya. I was tempted to hand her the shitwit of the year award then and there. However, it is not only relatively obscure facts like that. The only person besides myself and a few of my nerd friends to know who Michele Bachmann was at my school was a teacher. People were surprised to hear that Donald "Fuckface von Clownstick" Trump was a Republican, let alone involved in the political world.

I once had a teacher who said that the geeks shall inherit the earth. And while the proper term is nerd, not geek, I hope, for the sake of my generation and the world, that he is right.

Kid Zoom is a high school sophomore in the wilds of Idaho. He is the spawn of Doktor Zoom. We don't quite have the heart to tell him that most of his co-nerds who are into politics now are going to end up being libertarians :(