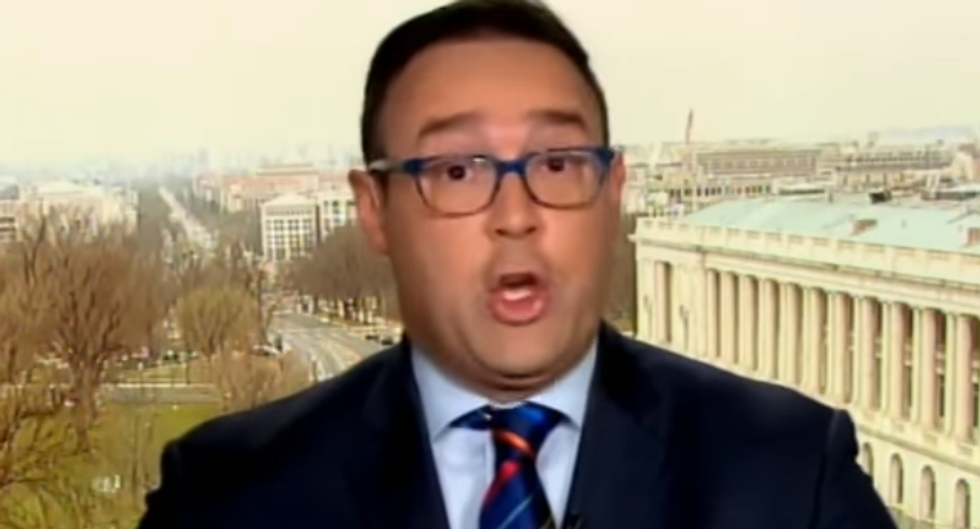 Two big stories related to #MeToo hit this afternoon. One is a story in the New York Times by Maggie Haberman and Amy Chozick, about how Hillary Clinton, during her 2008 campaign, "shielded" her personal faith adviser, Burns Strider, from allegations of repeated sexual harassment against a 30-year-old campaign worker. It's a sucky story, and it's one of those stories that's bound to keep coming out as more and more women come forward to tell their truth. The truth of the "shielding" is a bit more complicated -- instead of firing him, as some advised her to do, Clinton punished him by "[docking him] several weeks’ pay and [ordering him] to undergo counseling." Meanwhile, the victim of Striders' yuck touches (reportedly, handsy back massages, forehead kisses) and harass-y emails was moved to a different job away from YuckToucher McJesusPants. Later on, Strider worked for liberal rabble-rouser David Brock, and he got fired from that gig too, partially for being handsy. Surprise!

It's one of those stories that, had it come out in 2008, probably wouldn't have amounted to as much as it does now, in the post-Harvey Weinstein era.

Of course, as Wonk Pal Charlie Pierce points out, "these two things can both be true" about the story: that it's a legit story, and that OMG can you believe it? Maggie Haberman has published an article in the New York Times that paints Hillary Clinton as an irredeemable ogre! No way! Haberman and the Timeshaven't ever done anything like that before!

Pierce flags this graf from the Times piece, highlighting exactly where the insanity in this perfectly legit story comes into play:

Mrs. Clinton’s candidacy has been cited as an inspiration for the #MeToo movement, but she has not played a visible role in it. After several Hollywood actresses told The Times and The New Yorker that Harvey Weinstein, a longtime friend and donor to the Clintons, had harassed or assaulted them, Mrs. Clinton spoke out against his behavior, saying in a statement that she was “shocked and appalled by the revelations.” Weeks later the actress Lena Dunham, one of Mrs. Clinton’s most visible celebrity supporters in her 2016 presidential bid, told the Times that she warned two Clinton campaign aides against associating with Mr. Weinstein. “I just want you to know that Harvey’s a rapist and this is going to come out at some point,” Ms. Dunham said she told the campaign.

We hear you loud and clear, New York Times. Hillary Clinton hates #MeToo. Hillary Clinton just looooooves rapists. She especially loves Harvey Weinstein The Rapist. It's in the newspaper of record, so it must be true!

Of course, according to women who have worked for Wynn, it was common knowledge he was a big old rapey pervert, and they tried to protect each other from him:

Former employees said they sometimes entered fake appointments in the books to help other female workers get around a request for services in Mr. Wynn’s office or arranged for others to pose as assistants so they wouldn’t be alone with him. They told of female employees hiding in the bathroom or backrooms when they learned he was on the way to the salon.

“Everybody was petrified,” said Jorgen Nielsen, a former artistic director at the salon. Mr. Nielsen said he and others repeatedly told high-level company executives Mr. Wynn’s sexual advances were causing a problem, but “nobody was there to help us.”

WSJ has gruesome allegations of Wynn raping a manicurist who worked for Wynn Las Vegas, coercing massage therapists into giving him handjobs, exposing himself to female employees, and so forth. If you'd like to read them all, please visit WSJ.

Our point in putting the stories together this way is so we can take bets on how bad Chris Cillizza's Hot Take(s) on these stories will be, assuming he's not taking a three-bottles-o-wine lunch. (Because TGIF, you guys!) We bring it up because, back when the Weinstein allegations came out, Cillizza, a mansplaining loser hack who is inexplicably employed to "analyze" news, wrote both about how that gargoyle Hillary Clinton didn't see fit to comment on the Harvey Weinstein allegations, and also about how when she did respond, she did so incorrectly and not fast enough for Chris Cillizza.

And these two retweets:

So, assuming we didn't hit the nail on the head with our Friday wine brunch theory and Cillizza graces us with his analytical brilliance, what will he write? Will he ignore the Wynn story so he can call Hillary Clinton a bitch a whole bunch? Will he #BothSidesDoIt about how the Wynn story and the Weinstein story are very similar, which reminds him of how Hillary Clinton is a bitch?

Or will he STFU for once, because nobody asked him?

Take your bets in the comments, which are not allowed. And if he publishes, share the link and make fun of it in the not-allowed comments, because it is WINE THIRTY FOR WONKETTE.